The velocity of infalling matter in the core increases as we move out from the core center.

But the infall velocity shows an opposite trend. What sets this 'infall velocity' and why it increases as we move out from the core centre?

You may want to look at "Stellar Structure and Evolution" by Kippenhahn, Weigert and Weiss. Paragraph 36.3.1 "Simple collapse solutions" contains just what you are looking for. In particular, figure 36.5 shows the velocity profile as a function of the radial mass coordinate. I have reproduced the figure here: 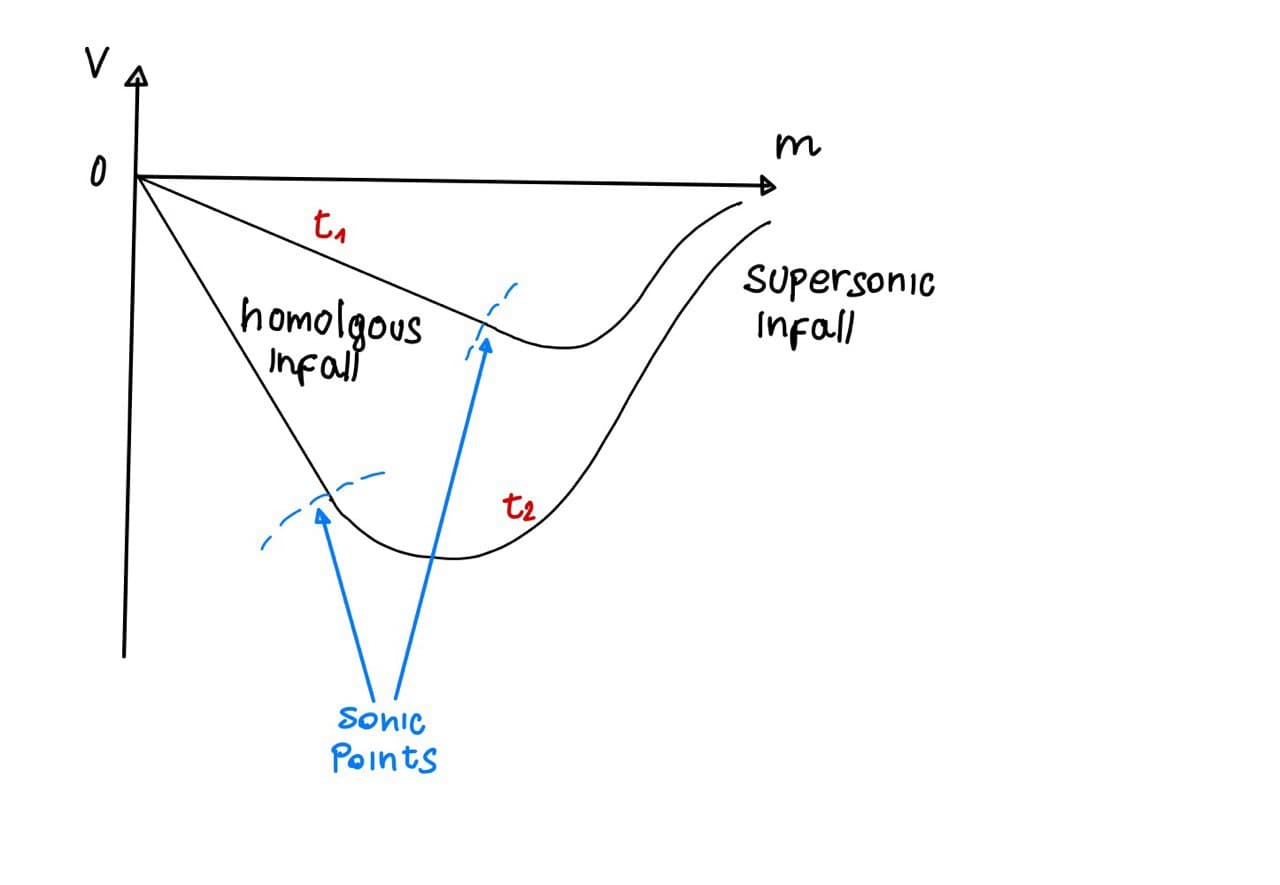 The reasoning is more or less as follows: you can model the collapsing core as a relativistic degenerate gas with equation of state

If you define a scale factor $a$ and a radial coordinate $z$ such that $r=a(t)z$, you can see that the system of equations decouple into one equation for $a(t)$ that can be easily integrated, and one equation for $\rho(z)$:

Just as with the Lane-Emden equation, this equation admits solutions only up to a total mass $M<M_{c}$, where $M_c$ is not much higher the the Chandrasekhar mass.

The result is that if the mass of the collapsing core is greater than $M_c$, the whole core cannot be described by the solution of the equation. The inner part of the core, up to $M_c$ will follow the outlined equation and will therefore fall homologously with $v_r = \frac{\dot{a}}{a}r$: the radial velocity is higher the further from the centre. The external part of the core, not described by the equation, will instead be nearly in free fall.

Furthermore, the Chandrasekhar mass is proportional to $\mu_e^{-2}$. But electrons are captured during the collapse, thus $\mu_e$ increases and $M_{c}$ decreases. This means that during the collapse the part of the core that collapses homologously will shrink.

This was just an outline of the process, if you want more details I vigorously encourage you to take a look at the Kippenhahn.

Supersonic infall and some more references

Prompted by Lekha's comment, I have found more references on the subject. Kippenhahn(1) bases his argument on Goldreich(3), and Yahil(4)(5). The figure comes instead from Müller(2).

Following Yahil(4), since the velocity of the infall cannot exceed the free-fall velocity $v_{ff} \approx \sqrt{\frac{2Gm}{r}}$, the mass of the inner part of the core can be determined by finding where the velocity of homologous collapse $v \propto r$ equals $v_{ff}$. Numerical calculations show that in the outer part $\rho r^3 = const$. Reasoning roughly, this means that $m(r) \sim log(r)$ and $v_{ff} \sim \rho^{1/6}$. But also the sound speed goes as $c_s = {\partial P \over \partial \rho} \sim \rho^{1/6}$, therefore $\frac{v}{c_s} \approx const$. Indeed the results of the simulation show that the infall velocity of the outer core is constantly around Mach 2. Keep in mind, tough, that Yahil's model doesn't assume a politrope with $\gamma = \frac{4}{3}$ and is therefore more general than the one exposed here.

Not the answer you're looking for? Browse other questions tagged observational-astronomy supernova or ask your own question.