What is the closest stellar neighbour to Sirius?

What is the closest star to the Sirius system, excluding Sirius B?

So that immediately suggests that Procyon, Alpha Canis Minoris, may be the closest star to Sirius, since it is in a similar direction as seen from Earth and at a similar distance to Sirius.

I have a copy of an astronomy textbook, Exploration of the Universe Brief Edition George Abell, 1964, 1969. Appendix 12 on page 464 lists the nearest stars to the Sun.

They include in order of increasing distance from the Sun: Alpha Centauri, Bernard's Star, Wolf 359, Lalande 21185, Sirius, etc., including a total of 37 solitary stars and multiple star systems out to 40 Eridani.

The table lists the stellar distances from the Sun in parsecs. A parsec is approximately 3.26164 light years.

Instead of converting parsecs to light years, I assume that a candidate star's distance from the Sun must be less than two times the distance of Sirius from the Sun, otherwise the Sun must be closer to Sirius than the other star. The distance of Sirius is 2.67 parsecs, and twice that is 5.34 6arsecs. Unfortunately the table only goes out to 5.00 parsecs, but that should be enough.

The direction to Sirius is given as 6 hours, 42.9 minutes, latitude minus 16 degrees 39 minutes in the equatorial coordinate system. An hour angle is equal to 15 arc degrees, so an hour minute is equal to 0.25 arc degrees or 15 arc minutes.

So a star would have to be between 7 hours 36.7 minutes, and 5 hours 49.1 minutes to have closer equatorial longitude to Sirius than Procyon does.

A star would have to be between latitude plus 5 degrees 21 minutes and minus 38 degrees 39 minutes to have a closer latitude to Sirius than Procyon does.

Sirius is 2.67 parsecs from the Sun, and Procyon is 3.47 parsecs from the Sun. So the difference in their distances is 0.8 parsecs. Assuming that a star has to be less than one parsec closer or farther than Sirius to be closer to Sirius than Procyon, that gives about 20 star possibilities.

All in all, Procyon seems to be the best candidate to be the closest star to Sirius. But BD+5 degrees 1668 and Ross 614 may also be contenders.

There are more modern lists of nearby stars, which have more precise distances and include recently discovered nearby stars, mostly dim red dwarfs and brown dwarfs which are not really stars but are considered to be intermediate between planets and stars.

Wikipedia has a "List of nearest stars and brown dwarfs", for example.

I have actually calculated the actual distances between stars based on their coordinates and their distances from the Sun, but it is rather complicated.

There is a site called Wolfram Alpha Widgets which has a widget for calculating the distances between two stars.

So it is my opinion that Procyon is very likely to be the known star that is closest to Sirius.

The dividing line between planets and brown dwarfs is approximately 13 times the mass of Jupiter. So there is a possibility that UGPS J072227.51−054031.2 could actually be a rogue planet in interstellar space, which would make it certainly not a star nor the nearest star to Sirius.

I used the Simplified Hippcarcos Catalog and wrote a program to use the RA, Dec, and Parallax. Convert those to rectangular coordinates, and compute the distance between Sirius and every star in the Hipparcos catalog. And some help debugging from JamesK. It's possible another catalog might produce a different winner.

A photo of the winner: 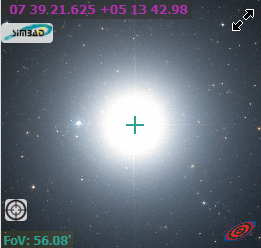 Not the answer you're looking for? Browse other questions tagged star .

10
When will Sirius be closest to the solar system?
0
In the closest stars, can you see the stellar corona?
1
When exactly star Sirius shines into the queen's chamber of Great Pyramid?
5
What is the distance from Alpha Centauri to Barnard's Star?
1
what would the mass and density of Sirius A be if the mass of Sirius B is roughly the same as the Earth?
7
How and when will Sirius migrating towards the Sun trigger the movement of Kuiper belt objects into the solar system?