How can a 1-pixel image of a rotating asteroid be used to measure its thermal inertia?

Phys.org's Observatory in Chile takes highest-resolution measurements of asteroid surface temperatures ever obtained from earth discusses imaging of millimeter wave imaging of the surface of asteroid 16 Psyche by ALMA. Per Wikipedia, at over 200 km in diameter Psyche "is the most massive of the metal-rich M-type asteroids".

It links to the extensive paper in the open access The Planetary Science Journal; The Surface of (16) Psyche from Thermal Emission and Polarization Mapping.

The Phys.org summary discusses the thermal inertia of the surface. Roughly speaking that's how slowly an area on the surface heats up or cools down after local sunrise or sunset.

A straightforward way do measure thermal inertia of a roughly spherical body that's rotating is to track the thermal radiation of a given area as it transitions back and forth between sunlit and dark (day and night) and gauge the slowness of the temperature change.

Read about thermal inertia measurements of Mercury for example in:

But then I read in Phys.org:

Typically, thermal observations from Earth—which measure the light emitted by an object itself rather than light from the sun reflected off of that object—are in infrared wavelengths and can produce only 1-pixel images of asteroids. That one pixel does, however, reveal a lot of information; for example, it can be used to study the asteroid's thermal inertia, or how fast it heats up in sunlight and cools down in darkness.

Question: How can a 1-pixel image of a rotating asteroid be used to measure its thermal inertia?

Millimeter-wavelength emissions reveal the temperature of the asteroid Psyche as it rotates through space. Credit: California Institute of Technology

On the basis of this review article by Delbo et al. (2015) about modeling asteroid properties, I think it might work something like this: 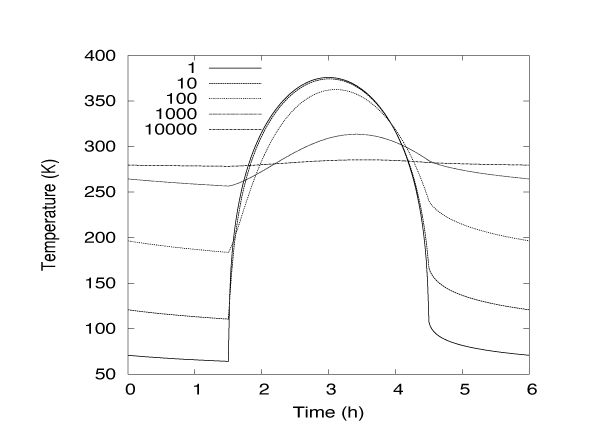 Varying the parameters of the model (including the thermal inertia) and comparing it to the data allows you to put some constraints on those parameters. Here's an example of a model prediction for mid-IR emission, along with the observations: 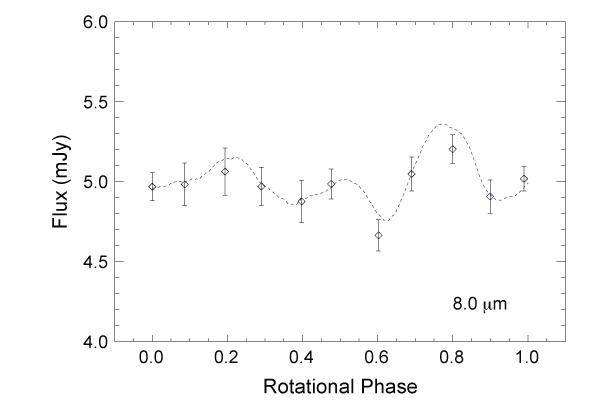 (I would imagine that you could improve your modeling by observing the rotational variations in both reflected optical sunlight and emitted thermal radiation at different points in the asteroid's orbit, where both its distance from the Sun and its orientation relative to us will change. For example, an asteroid that makes a $90^{\circ}$ angle with respect to the Sun-Earth line will show us about half of its illuminated side and half of its night side, while an asteroid at opposition to the Sun will show the full illuminated side.)

Not the answer you're looking for? Browse other questions tagged observational-astronomy asteroids radio-astronomy temperature infrared or ask your own question.

4
Is there a certain thermal inertia for maximum Yarkovsky?

6
Why would the Chang'e-4 lander find lunar far side temp. "colder than scientists expected", when the LRO has already been taking thermal readings?
4
Has Hubble ever been used to try to image a near Earth asteroid?
4
How often are radio telescopes used to measure parallax? When was this first done?
4
What would a 220km diameter asteroid impact do to Earth?
3
What is the YORP effect exactly? Is it just the non-central component of the Yarkovsky effect?
2
What would "the next GAIA"-like instrument be like? Could it simply be a 3 to 5x scaled-up version of the same beautiful system?
1
When thermal infrared space telescopes spot asteroids, are they seeing the body's own thermal emission, or reflected TIR from the Sun?