Whoever named Gomez's Hamburger sure must have been hungry, because it doesn't really look much like a hamburger.

The object was discovered in 1985 in images taken by Arturo Gomez of the Cerro Tololo Inter-American Observatory in Chile, and it was initially identified as a planetary nebula around a very old, dying star. But if it was a planetary nebula, it was an odd one, with a dark band stretching across the glowing centre.

It wasn't until 2008 that astronomers suggested Gomez's Hamburger might actually be the opposite; not an old star 6,500 light-years away, but a very young one, just 900 light-years away, around four times the mass of the Sun. So young, in fact, that it is still surrounded by a protoplanetary disc of dust and gas.

In this model, the bright regions - the burger's buns - are starlight reflecting off dust around it. The burger's filling is that protoplanetary disc, seen edge-on. 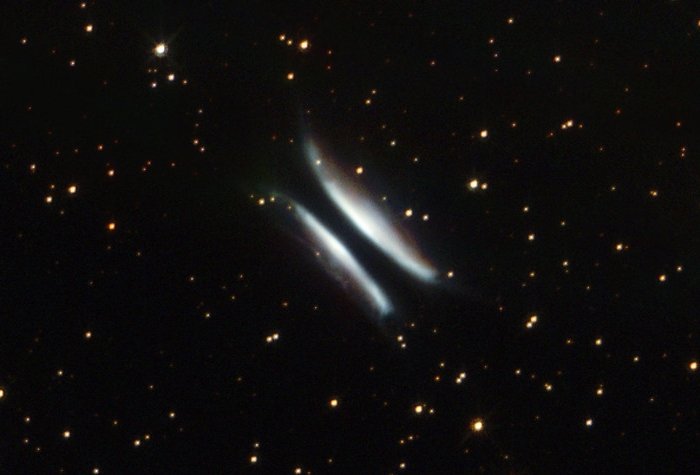 The discovery team at the Cerro Tololo Inter-American Observatory in Chile.

If British Observers are feeling a pinch, they could always take a lead from their colleagues at the Cerro Tololo Inter-American Observatory in Chile. Astronomers there may be well on the way to getting funding from a fast-food chain having just named a celestial object "Gomez's Big Mac".

Sponsership hasn't come into it yet, we gather. The observatory says they chose the name solely because the object, a star with a ring of dust, is "hamburger shaped".

Two things to note in this source from 1986. Firstly "Big Mac" not hamburger. The earliest sources from '86 all use "Big Mac". Secondly, it is identified as a star with a dust ring, not a planetary nebula.

It may be forgotten who exactly first said "hamburger" in the context of this object. But it is clear that it was named thus from the start, and not given this nickname later.

4
Whose name is Fleming 1 nebula bearing?

3
Why stars are named Gliese?
2
Which stars have been named after astronomers?
4
Why were two galaxies named "The Sagittarius Galaxy"? Is this common?
5
Why were the Magellanic Clouds named that way?
3
When will 2002 MS4 be named?
1
Any stellar entity named A1?