Radius to which all hydrogen-burning stars are known?

For the purposes of this question, I wish to consider active, hydrogen-burning stars, not deuterium-burning brown dwarfs, or stellar remnants like black holes or neutron stars. (Though including those would be interesting questions in and of themselves)

What is the upper limit of distance that we can say, "To a high degree of certainty, every star that exists within this sphere centered on the Solar System, has been discovered?"

Your best bet is probably a distance-limited catalog designed to include everything within a specific distance. The most recent such compilation I'm aware of is Reylé et al. (2021), which has a limit of 10 pc and includes slightly more than 300 (hydrogen-burning) stars, along with about 20 white dwarfs and several dozen brown dwarfs.

They note that they are probably incomplete for very late/cool/faint brown dwarfs and also faint white dwarfs, but they seem pretty confident they have all the (hydrogen-burning) stars.

So the safe upper limit would be 10 pc.

Thanks for asking this question. I had fun looking up information and learning more by trying to figure this out.

As we get to the lowest masses for hydrogen-burning stars, the luminosity as a function of mass is either discontinuous or nearly so. The derivative becomes either infinite or very large. (From now on I'll just say words like "discontinuous" without the qualifiers.) The following graph, from Kroupa 2002, shows this feature: 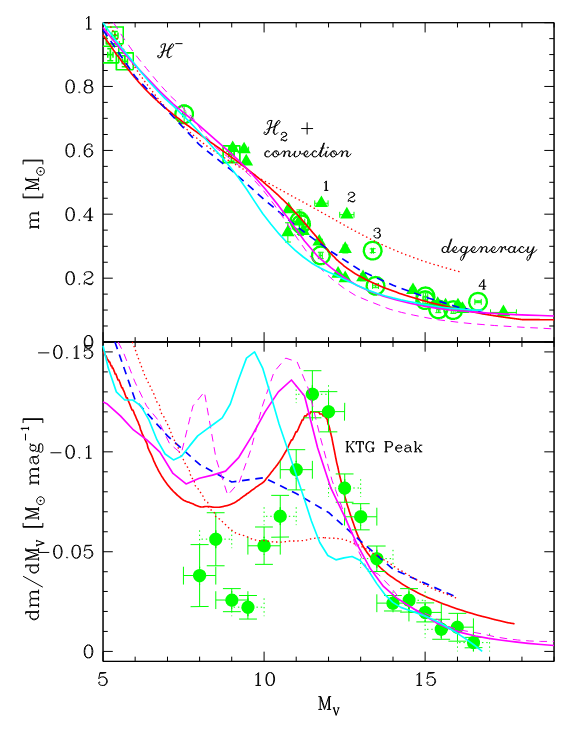 The graph has mass on the y axis and M_V on the x axis, so the bad behavior shows up as a horizontal graph (derivative of the inverse function blows up). For more on stars right at the hydrogen-burning boundary, see this article by Lodieu. Figure 1.2 is helpful, showing how the luminosity tracks bifurcate for the two classes of stars. The critical mass for hydrogen burning depends strongly on metallicity, as do temperature and luminosity. For a star with solar metallicity, a star at the critical mass has $M_V\approx 19.5$ and $M_K\approx 11.5$, but these numbers are really sort of ill-defined because one is essentially zooming in on a discontinuity (or near-discontinuity) in a graph and trying to pick off a $y$ value. The way this mathematical ambiguity manifests itself in reality is that $y$ depends very strongly on other factors, such as metallicity.

As we approach this critical mass, the luminosity drops discontinuously, and therefore so does the maximum radius of detection. So if the question is to be well posed, we have to distinguish between two questions. Let $m$ be the mass of the star, $m_0$ the critical mass for hydrogen burning, and $r$ the greatest distance at which it can be detected. Then we have two different limits. There is one for stars,

and a different one for brown dawrfs,

Looking through the list of nearest stars on WP, we get stuff like M8.5 stars with an absolute J magnitude of about 11.5, per a correction by Peter Erwin. The J band is centered at about 1.2 μm. It looks to me like an M8 is very close to the minimum mass for hydrogen fusion. The WISE survey is a fairly recent full-sky infrared survey, and it used a set of filters called W1 through W4. W1 is centered at about 3.4 μm. Looking at this thesis by Silverstein, usually the W1 magnitudes of cool objects like this are about 1 magnitude brighter than their J magnitudes, so maybe a star like this would have a W1 magnitude of about 10.5. WISE's sensitivity varies a lot in different parts of the sky, but they seem to be confident that they can detect anything with a W1 magnitude lower than 16.6. This gives a distance of roughly 160 pc. This is probably a reasonable estimate of $r_s$.

Not the answer you're looking for? Browse other questions tagged star observational-astronomy distances star-maps or ask your own question.

2
By type, how far out do we have good star maps?
5
How well have we mapped our local neighborhood of stars?

9
Burning Out Stars
9
Is there anywhere I can find some kind of database on all known stars and their properties (mass, surface temperature, radius, and luminosity)?
0
How can I find out which known stars lie within or close to M8
4
What is the largest hydrogen-burning star?
3
Are stars really "burning balls of gas"?
2
Do stars tend to fuse all hydrogen even when the mass is small?
3
Why Helium-burning Stars are found in a Horizontal Branch?
17
Hydrogen burning vs Hydrogen fusing
0
Is it possible for stars to not begin fusing hydrogen at all?
2
By type, how far out do we have good star maps?