Can an object from a natural process escape earth gravitation?

I'm no expert, but I once studied basic from advanced physics and understand

What I want to know, can a natural object, from a natural process, reach the escape velocity 11.2 km/s and get free of earth gravitation?

I have in mind some volcano explosions. Tornados seem weak. Or also a Comet impact. Question is not limited in time, maybe it was possible millions of years before, when activities and gravity might have been different.

Yes, it is not only possible, but has almost certainly happened on Earth. The asteroid that killed the dinosaurs is thought to have produced these high velocity fragments on the order of one-thousandth of the mass of the impactor according to Poveda and Cordero [2008]. In fact, they estimate the volume of escape velocity ejecta from the Chicxulub event as quite substantial in that:

The authors of the above paper call these "Chicxulubites" and speculate on the possibility of finding them on the Moon and Mars.

The larger the impactor radius and velocity, the higher a percentage of its overall mass will reach escape velocity. In an asteroid impact, the fastest moving ejecta comes from near the center of the crater. The ejecta closer to the edge of the crater has much lower velocity: 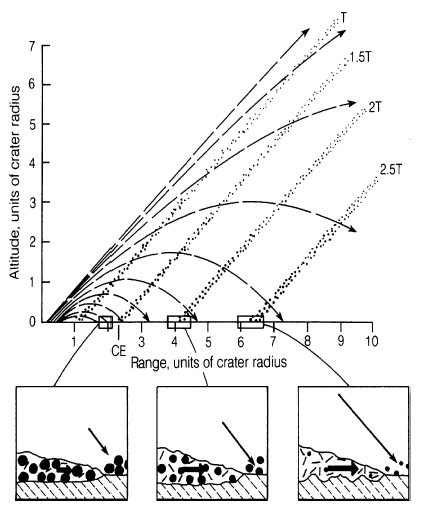 The equation governing the velocity of the ejecta $V_{ej}$ is therefore partly a function of $r$, the distance from the center of the crater.

Where $\epsilon$ is a material coefficient of 1.8 for hardpack soil, $g$ is the surface gravitational acceleration, $R$ is the total radius of the equator, and $r$ is the radius at which the ejecta was ejected.

If the object can be as small as an atom, then it's happening constantly. Atoms in a hot gas mixture will have an average velocity related to the average kinetic energy which is in turn related to temperature.

tl;dr: The Earth loses 95,000 tonnes of hydrogen and 1,600 tonnes a year of helium in the form of atoms or molecules.

For example, in a standard atmosphere near the surface, the average speed of a molecule is also roughly the speed of sound, or about 330 m/s for an average molecular mass of 28. For helium atoms in air with a mass of 4 the speed will be $\sqrt{7}$ larger, or about 870 m/s.

That still sound very far from escape velocity, but that's the average. There's always a distribution in velocities and for a given velocity component the Maxwell-Boltzman velocity distribution is

But at the tippy-top of Earth's atmosphere a few things are different. Atoms can be much hotter than 300 Kelvin and the distributions of kinetic energy can be non-thermal in nature, and the densities are so low that once an atom achieves escape velocity there's a good chance it will escape without hitting anything further.

At lower altitude the atmosphere's mixture has relatively constant ratios, but (as the plot shows) once you get above 90 to 100 km the density is so low that the gases are no longer automatically mixed. At this point each gas can have its own scale height such that the exponential rate of drop off is faster for the heavier gases.

This produces a sequence of primary gas component as a function of altitude.

See concepts of scale height and turbulent mixing in answers to Why does Earth's atmospheric density have a big “knee” around 100 km? Is there a good analytical approximation? 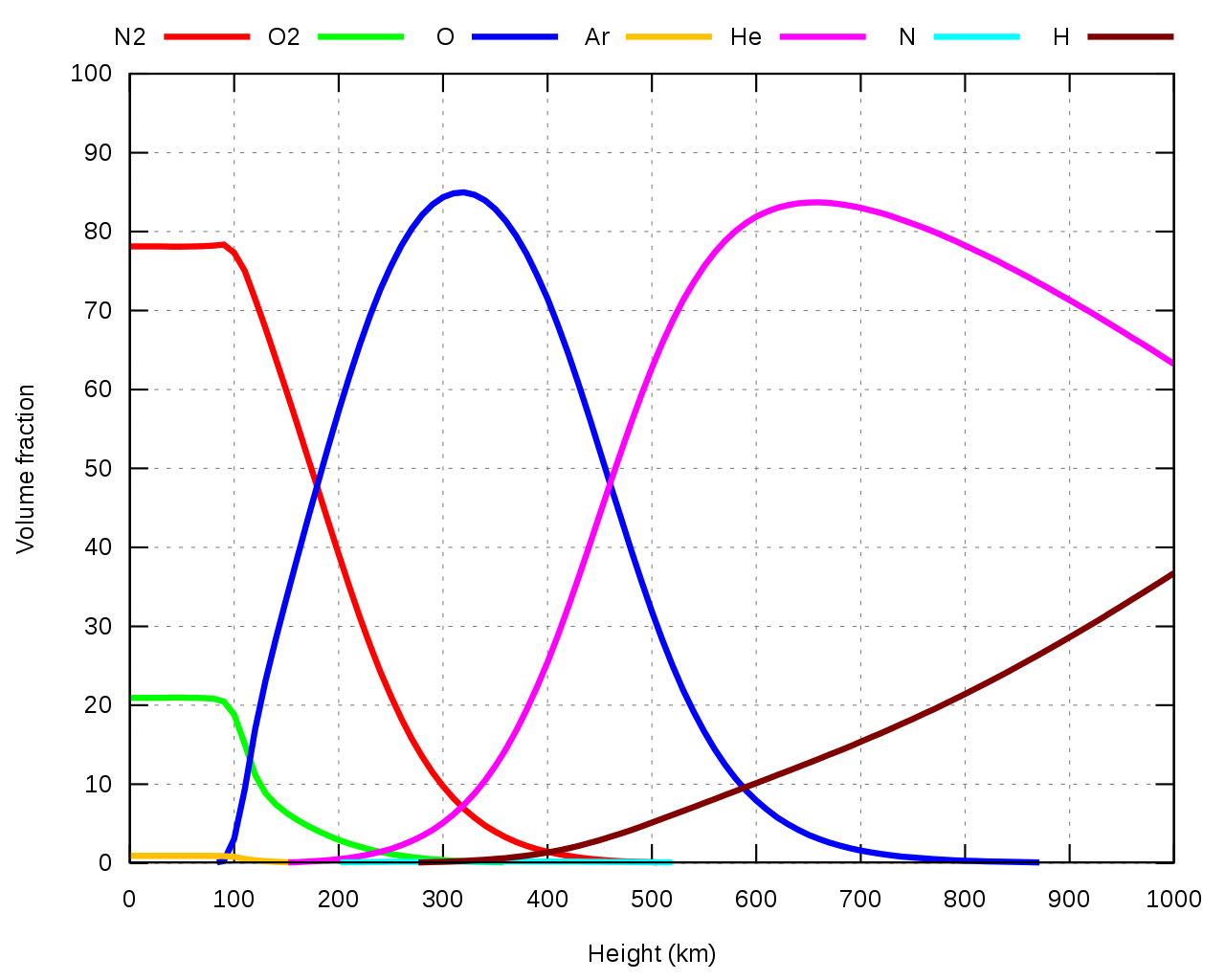 This answer to Is Earth getting heavier or lighter? says:

It seems a similar question was asked in Astronomy Stack Exchange, and this short answer links to the BBC News article Who, What, Why: Is the Earth getting lighter? which answers this question.

"The other very light gas this is happening to is helium and there is much less of that around, so it's about 1,600 tonnes a year of helium that we lose."

I'd be surprised if the event that created the Moon didn't scatter some debris beyond the Earth's Hill sphere (in order to choose one meaning of "escape Earth gravitation").

Not the answer you're looking for? Browse other questions tagged earth volcanism escape-velocity or ask your own question.

9
If 50 tons or more of debris falls to earth everyday, is Earth getting heavier?
9
What percentage of a lunar meteor strike is blown back into space?
8
Could rocks from Earth have reached the Kuiper belt, or Neptune at least? If so, how?

5
From what distance can one object influence gravity of another object?
1
Can earth escape sun's gravity with the help of a black hole heading towards our solar system?
11
Can I leave a planet without achieving escape velocity?
2
Is the radius used in the formula for the escape velocity the average radius of the celestial object or the radius at the starting location?
8
Can Earth host another natural satellite than the Moon?
3
If a giant object would approach the Earth, would Earth start to turn faster or slower while the object starts to become nearer and nearer?
6
Can a habitable planet be smaller than 0.58 Earth radii?
3
Can Stellar Spaghetti ever escape?