How long does the "eclipse" last on a space station at the L1 point between a moon and a planet last when the moon blocks the sun in front? 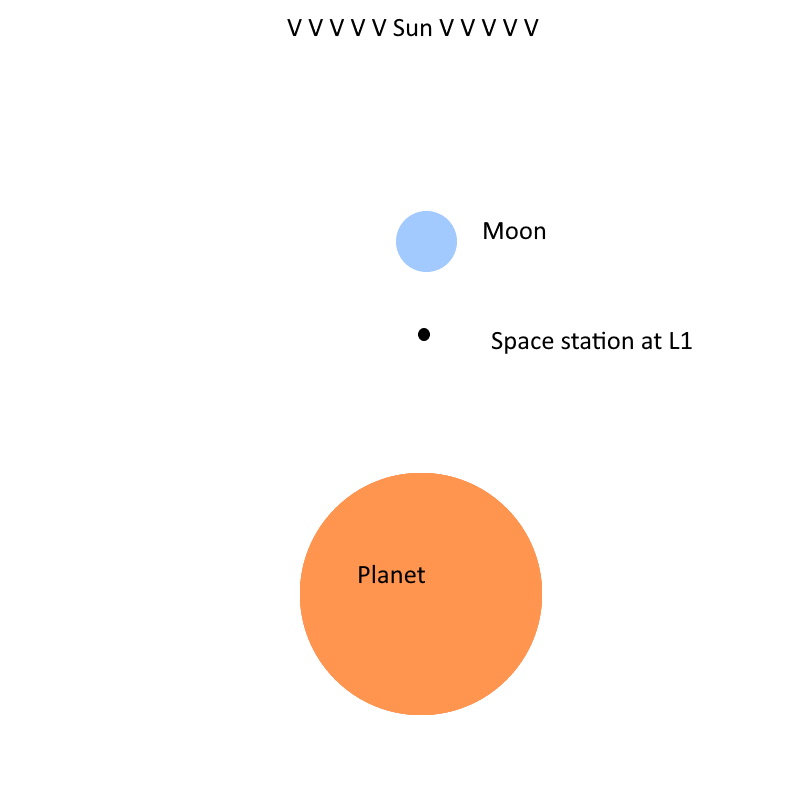 I think that unlike the situation on the other side of the planet, where the planet is blocking the sun (i.e. a normal lunar eclipse), this situation is complicated by the special positioning of the space station of it always being directly "behind" the moon (due to it being parked on L1).

Here is the numerical data for all the objects in question.

However, just in case I have messed up the calculation, here are the masses of the moon and the planet as well:

I've found, by drawing, that assuming everything lines up (the moon orbits exactly in the plane of the sun, etc) that for 14/360 degrees of the orbit, the satellite will be in the moon's shadow. I carefully drew the orbits and the shadows using GeoGebra I assumed circular orbits, everything coplanar, and sun at infinity (it makes a negligible difference at this scale)

Not the answer you're looking for? Browse other questions tagged astrophysics mathematics lagrange-point eclipse-non-earth-related or ask your own question.

3
How to calculate the position of the sun in long/lat?
2
Does the given radius of a planet/moon include its atmosphere?
3
Effects of a rogue planet passing between the Earth and the Moon?
4
What irradiance does the Moon receive during a total lunar eclipse?
5
How to calculate the frequency of a gas giant eclipsing the sun from a moon?
24
Can a planet in our system eclipse the sun as seen from another one?
5
How long does lunar opposition surge last? Are there measurements of the full Moon getting suddenly brighter?
12
Why is the L3 Lagrangian point not perfectly stable? And why is the Earth-Sun L3 point a bit less than one A.U.?
1
Could the Moon placed near the Sun-Earth L1 point remain in a heliocentric 1:1 resonant orbit with Earth? If Earth were at 1 AU, where's the Moon?