What does this tweeted Astronomy Plot of the Week mean? What does it represent?

And I think @SabineBellstedt and @_jessthorne summary graph deserves a spot for sure.

If you work on #SED fitting you definitely must have this figure. Thanks to @_jessthorne who took the time to make it!. I've been writing a paper introduction and let me tell you it's extremely useful to develop comparisons between the different fitters

Question: What does this tweeted Astronomy Plot of the Week mean? What does it represent?

It seems that "it's extremely useful to develop comparisons between the different fitters" offers a clue, but I think only someone with substantial knowledge in stellar astrophysics can appreciate all that's going on here at first glance. I don't know where to even begin! 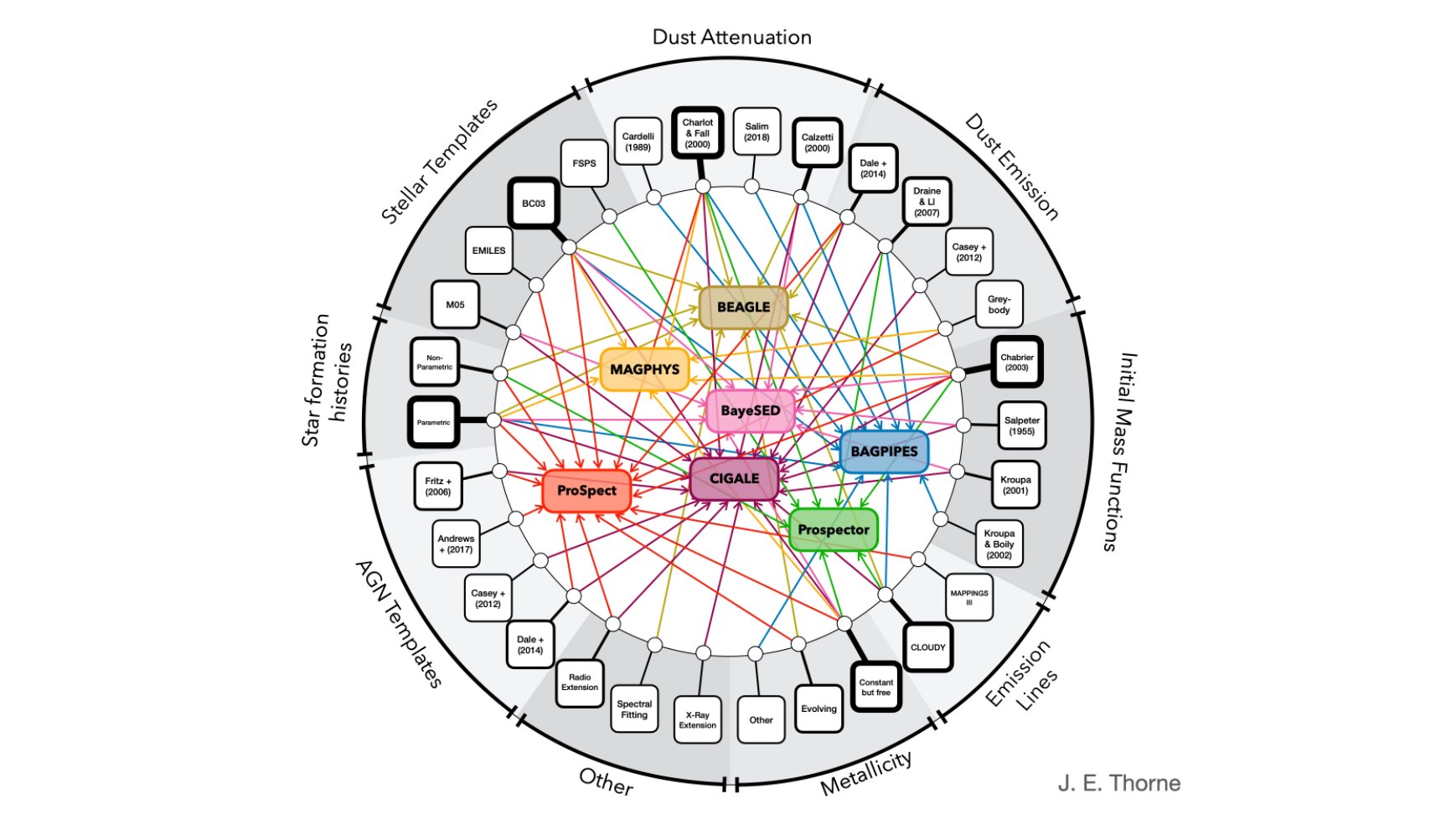 Its a diagram showing all the physics and modeling choices that go into different models (the colored boxes in the middle) to compute an SED.

First a SED is a spectral energy distribution, i.e how the amount of light varies as a function of wavelength. These kind of plots help understand to understand the underlying physics of an object.

This is affected by many things, firstly things that emit light (stars and AGN (Active galactic nuclei), and then by the things that get in the way of the light (gas and dust).

So to build a model of a SED first you need to know when stars form (star formation histories), what their masses are (initial mass functions), how many metals they have and whether that changes over time (metallicity). Then you need to know what those stars would look like (Stellar templates). Then you can sprinkle in some models of active galactic nucli (AGN templates).

Now we have the sources of light, we have to worry what dust is going to do the light (dust attenuation and dust emission), and throw in any other physics you missed (other and emission lines) before we see the final distribution.

But for each bit of physics there can be one or more choices to be made, some models will only cover some region of parameter space so they may need to be combined. For instance the initial mass function box has 4 sub-boxes with map to papers which describe well known initial mass functions. So you need to pick one. Other physics choices you may need to pick one or more sub-box depending on what physics you want to include.

So now we know the background physics of what we need, we need to combine the models into one overall model (the colored lines going to the colored boxes). So what this is showing is what physics is included in each model and in turns into a bit of a mess as each model can include multiple bits of physics (either physics is being combined or different pieces of physics are given as an option to use).

SED fitting is the practice of inferring physical properties of a stellar population (a galaxy, a cluster...) from measures of the Spectral Energy Distribution.

The spectrum of a stellar population is extremely information rich. It can be used to infer age, redshift, metallicity, present and past star formation rate, total stellar, dust and gas mass, as well as the relative proportion of the different kind of stars.

The center of the diagram contains the name of different popular SED fitting softwares. A longer and more comprehensive list can be found at http://www.sedfitting.org/Fitting.html.

How to synthesize a SED

A synthetic SED must take into account many aspects that can influence the spectrum of a stellar population. Different studies give different prescriptions about the treatment of these phenomena. The outer ring of the picture presents some of the most popular prescriptions and link them with the SED fitters that use them. In this sense, the figure is a quick reference to see what each software is taking into account. One expert that works in the field will know at a glance the pros and cons of every prescription, and will be able to select the SED fitter according to their present needs.

As a first approximation, the SED of a stellar population is the sum of the spectra of the single stars. It then goes without saying that a SED fitting software will need a stellar spectra library. Synthesizing the spectrum of a single star is a very complicated task. Authors of SED fitters don't usually roll their own stellar spectra generators, but use other public software. These codes provide a library of precomputed stellar spectra, for different ages and metallicity.

Not all stars are created equal. When stars form, some are more massive and others are lighter. Different masses will lead to extremely different lives and spectra. When $100 M_\odot$ of gas convert into newborn stars, the SED fitter needs to decide how this mass is distributed among the stars. For example, we know that the majority of stars have $M \le 1M_\odot$ and very few stars have $M>10M_\odot$. The initial mass function (IMF) is the distribution of masses among a newborn stellar population.

In the figure there are some of the most popular IMFs, reported with the name of the first author of the paper that proposed them. They usually consist of power laws, or broken power laws.

Were all the stars born in a single burst, like in a globular cluster? Or did they form more slowly? In repeated bursts? Is the star formation still going on now? These questions are answered by the star formation history function, that gives the star formation rate (solar masses per year) as a function of time since the birth of the first stars until now. Young stars have a very different spectrum than old ones, therefore when generating a SED it is important to keep track of the different ages of the stars in the stellar population.

The presence of dust can significantly alter the shape of a SED. Dust particles absorb visible and UV light, and emit the energy back in the infrared. Different models have been proposed to take care of the effect of dust on a SED.

If the galaxy contains an Active Galactic Nucleus, it is fundamental to include it in the synthetic SED. The flux of the AGN can single-handedly exceed the flux of the whole galaxy. Again, different AGN templates can be used.

Some SED fitters are extend their focus on some extreme part of the EM spectrum (most of them typically only treat IR-visible-UV) like radio or X-ray.

5
What uncertainty does an error bar signify in astronomy?
5
Where does energy at the beginning of a star's lifecycle (before any nuclear reactions) come from?
1
What does the filter name I+z' mean
8
Why does the convective core in an intermediate- to high-mass star shrink?
1
Does this CHEOPS first light image imply bad astronomy?
3
What does the Sun "look like" below 100 MHz?
2
Why does this nucleogenesis table not label s and r-processes for all elements (not-labmade) past Fe?
3
What does lowercase 'beta' mean in this graph of radio-emitting galaxies?
2
What does "RV model including a GP with a quasi-periodic covariance structure" mean?