Why does light accelerate instantaneously to c, while no other phenomena do it? [closed]

Ask Question
Asked 5 months ago
Active 5 months ago
Viewed 10k times
29
$\begingroup$
Closed. This question is off-topic. It is not currently accepting answers.

However, photons (light particles) accelerate instantly from zero to c. How? (A visualization would be helpful.)

When a photon is created, it is traveling at $c$. A photon is always traveling at $c$, there is no such thing as a stationary photon which is then accelerated. As an imperfect analogy, consider a pressure wave like sound traveling through air - the pressure wave itself is the movement of energy, you can't have a sound wave that remains stationary and does not move. Similarly, a stationary photon does not exist - if it exists, the electromagnetic wave (which is the photon) must be moving at $c$.

You are looking for a way to visualize the fact that a photon is created traveling at the speed of light.

Remember that a photon is actually a perturbation of the electromagnetic field. That field is everywhere at once. It is part of the fundamental construct of the Universe and it has, essentially, always been so.

An approximation of photon propagation might be to consider a mallet hitting a gong. The force waves (sound waves in the case of the gong) induced by the mallet striking the gong travel with an instantaneous speed; they do not accelerate, they simply propagate. The velocity at which they propagate is determined by the physical characteristics of the gong itself; it's the speed of sound.

The electromagnetic field has the property that all of its waves propagate at the speed of light, c, no matter what else is happening. because of this the gong comparison has its limits.

The key thing to remember is that the photon is not a particle; it is a perturbation. It is the field which determines the velocity of that perturbation and, in our Universe, that velocity is c. 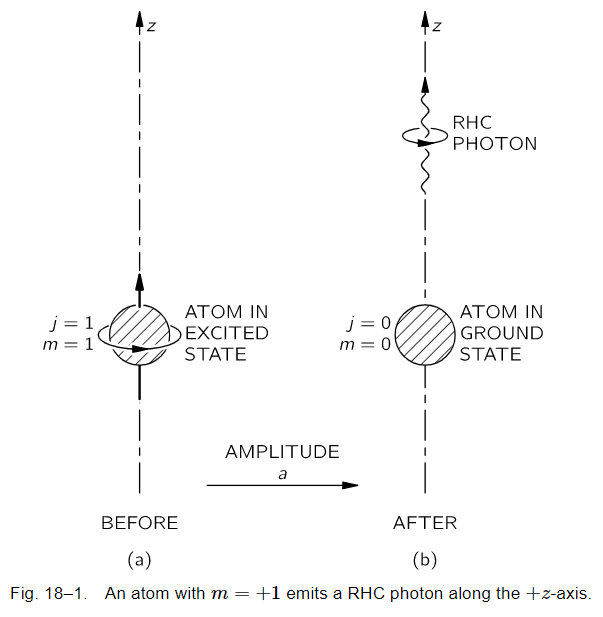 As an analogy, suppose you are on the edge of a merry-go-around, which is spinning very fast. If you let go, you won't speed up, instead you will continue moving in a straight line with linear momentum. The merry-go-around system will lose a corresponding amount of angular momentum so that momentum is conserved. No acceleration is necessary around the time you let go! This analogy, of course has its limitations, since a photon may be emitted off the rotational plane.

I think your core misunderstanding is this :

If a particle breaks up into two other particles, then the moment those two particles are created they have whatever velocities are required to conserve momentum (i.e. momentum before the break up must equal total momentum after). There's no acceleration required - they get that velocity the instant they are created.

In physics,some time is always need for a particle to move from rest to some speed.

This is not true in quantum mechanics. Particles created during a quantum interaction can be born with non-zero linear momentum with respect to the rest frame of the particles that generate the new particle. There is no acceleration. For example, there is no acceleration when a pair of photons are created via a electron-positron collision. The two photons are moving at the speed of light from the instant the collision created them. 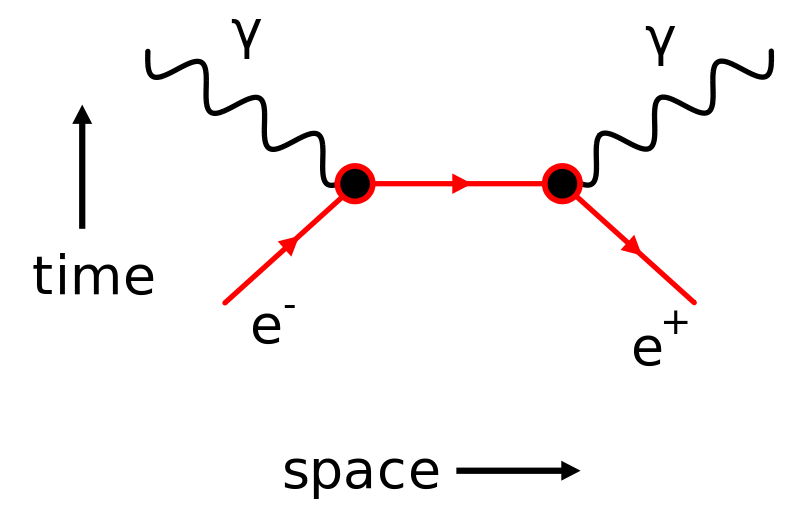 This is a Feynman diagram that depicts an electron-positron annihilation. Starting at the bottom of the diagram, the diagram shows an electron and a positron moving toward one another. At some point in time, the two particles get close enough together that their fields interact. This is the horizontal line in the middle of the diagram. At that point in time, a pair of photons are created that conserve the energy and momentum of the incoming particles. The created photons are born moving at the speed of light.

Not the answer you're looking for? Browse other questions tagged light time velocity or ask your own question.

12
Why is the speed of light 299,792,458 meters/sec?
1
Find constellation over Earth coordinates on a specific date-time
5
Photon Paradox?
0
LLR & Orbital Motion
43
Are photons aged?