With a top frequency of 240 MHz ($\lambda$ = 1.3 meters) and nominal diameter of 1000 km I ballpark the achievable resolution at about 0.3 arcseconds, consistent with the news.

While not as large in diameter, ALMA's resolution in Wikipedia is about 0.01 arcseconds because of it's "millimeter" wavelength range (at nearly 1 THz the shortest wavelength is a fraction of a millimeter).

Question: What is notable about LOFAR's sub-arcsecond radio resolution of distant galaxies? Does the lower frequency range enable new capabilities that millimeter waves can't for this type of observation? 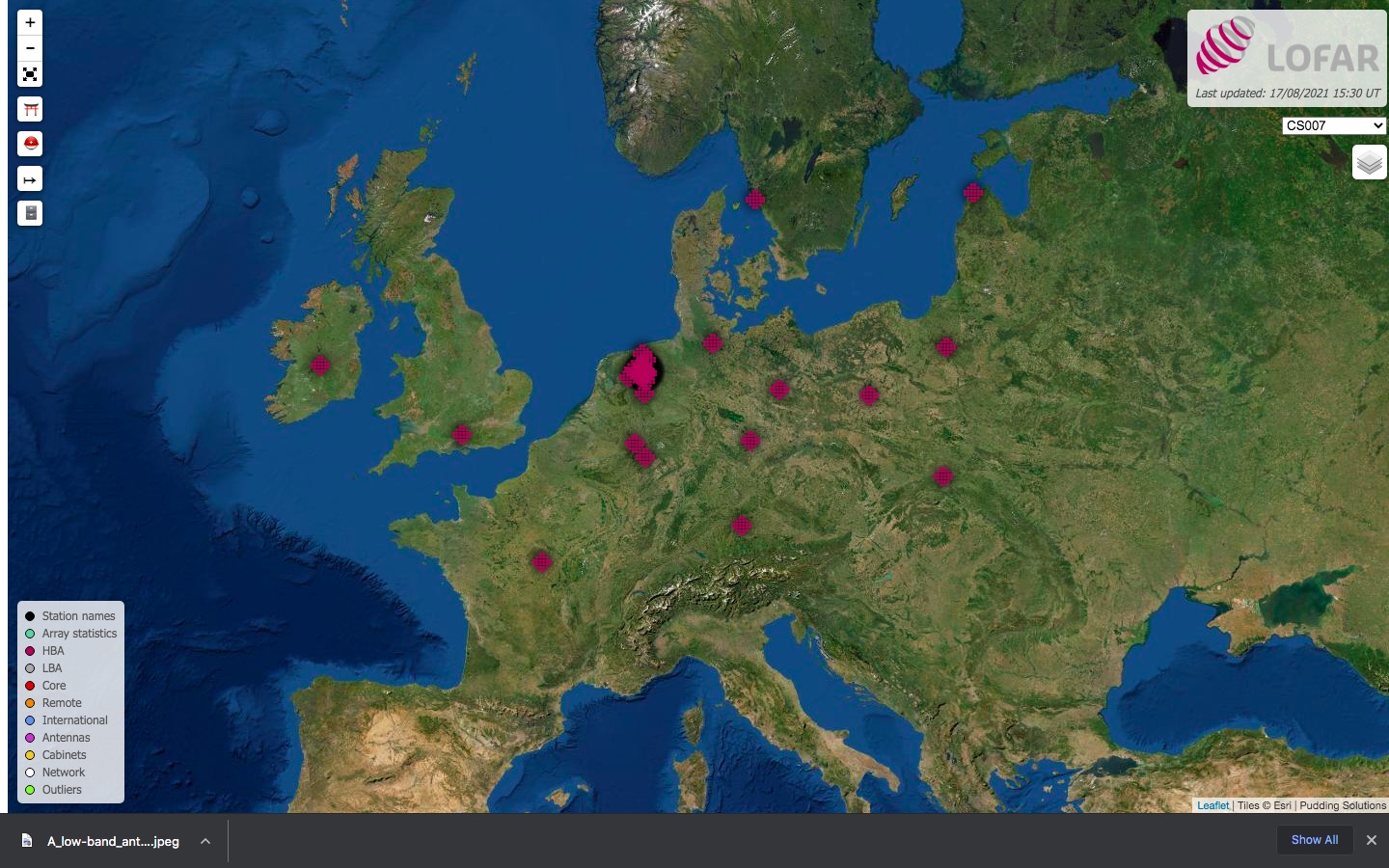 I'm one of the researchers involved with the International LOFAR Telescope (ILT) scientifically and technically, and have also contributed one of the papers and images you may have seen appear on various news outlets. You have asked an excellent question(s)! Let's split them up.

LOFAR has two types of antennas: the Low Band Antennas (LBA) and the High Band Antenna (HBA). The LBA is sensitive to radiation from 10-90 MHz (often restricted to 30-90, because below 30 MHz there is more RFI and it becomes incredibly challenging to calibrate because of the ionosphere, for example). The HBA is sensitive to frequencies from 110-240 MHz, with the most commonly used setup being the 110-170 MHz range. This gives us a central frequency around 144 MHz (colloquially called "150 MHz" for LOFAR sometimes).

Unfortunately, resolution is inherentely related to both the wavenlength and the size of of a radio telescope as $$\theta = \frac{\lambda}{b}$$ where $\theta$ is the angular resolution in radians, $\lambda$ is your observing wavelength and $b$ in this case is the baseline length. Given that with LOFAR we specifically want to observe low frequency / long wavelength radiation, we had no choice but to build an enormous telescope.

Currently our maximum baseline length (= distance between two stations) is just shy of 2000 km, going from Ireland to Poland, which will give you your estimated angular resolution of about 0.3 arcseconds.

What is notable about LOFAR's sub-arcsecond radio resolution of distant galaxies?

The notable aspect of this achievement is that we can now study radio-emitting sources at a similar resolution as optical telescopes and higher-frequency radio telescopes, which have had no trouble reaching these resolutions before.

There have been previous Very Long Baseline Interferometry (VLBI) experiments at low frequencies reaching comparable or higher resolution, but they often suffered from a lack of antennas or a lack of sensitivity. This is where the ILT shines: it has the resolution, but also many antennas (good for calibratability and image fidelity) a great sensitivity (good for studying faint(er) objects).

Does the lower frequency range enable new capabilities that millimeter waves can't for this type of observation?

Certainly! It's not all about the resolution. A galaxy can look very different depending on the wavelength you view it in: 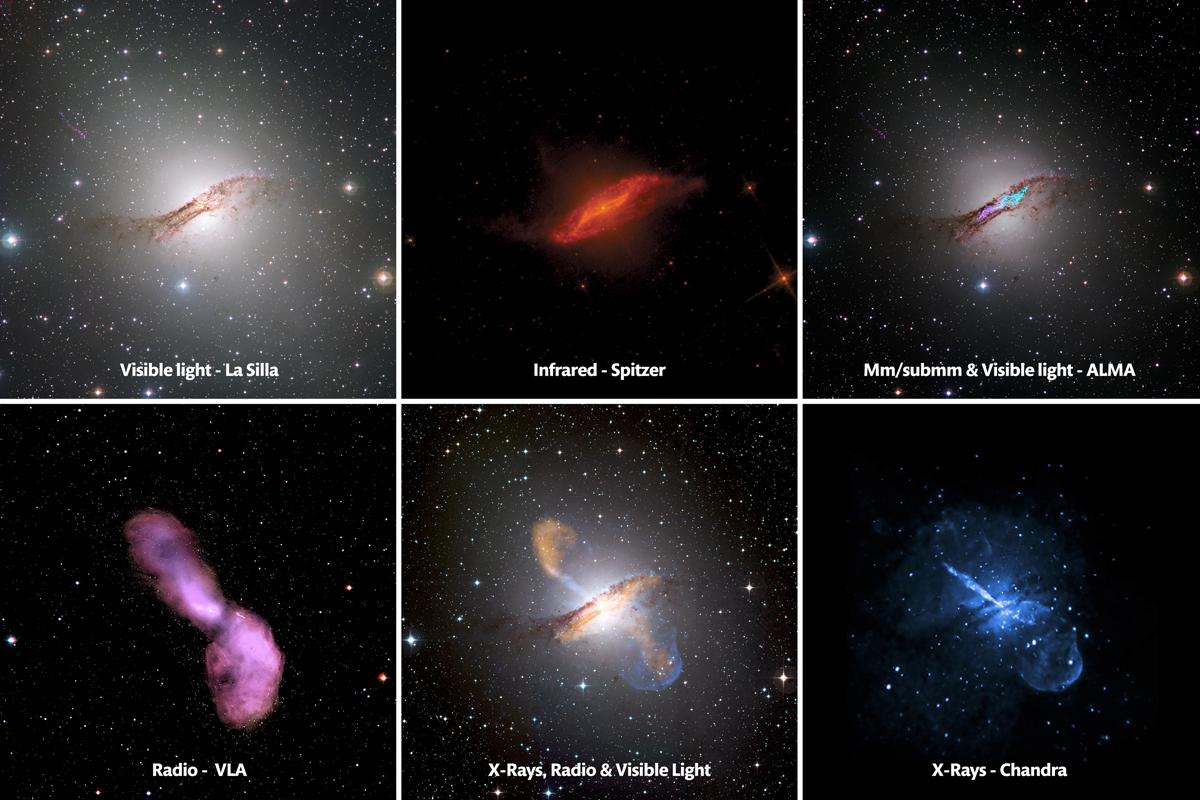 Image from the ALMA observatory. The mm waves that ALMA looks at, for example, trace a plethora of emission lines from molecules or thermal radiation from dust and such.

Radio frequencies on the other hand mostly trace non-thermal synchrotron radiation. This radiation is produced by charged particles being accelerated in a magnetic field. Just one of many aspects of this radiation is that higher energy particles, producing higher frequency radiation, lose their energy quicker than low energy particles producing lower frequency radiation. This means that even with the radio part of the spectrum, a galaxy can look different at 144 MHz (LOFAR) compared to 5 GHz (e.g. the Very Large Array (VLA)). We call this effect "spectral ageing", and low frequencies such as those probed by LOFAR are crucial in measuring and modeling this properly.

Another aspect is that LOFAR is an excellent surveying machine. It has a large field of view, so it will enable us to in the future survey a large fraction of the Northern sky. The LOFAR Two-Metre Sky Survey (LoTSS) has been doing this at a resolution of 6 arcseconds for the last decade, but in the future we can start doing this at 0.3 arcseconds. We will be able to capture a large sample of both nearby and far away objects in great low-frequency detail. Nearby sources will allow us to study physics of radio galaxies in great detail, whereas with this resolution we can also study distant and compact objects in the same detail as we could nearby objects before and compare them over e.g. cosmic time.

Not the answer you're looking for? Browse other questions tagged radio-astronomy radio-telescope radio lofar or ask your own question.

5
How LOFAR pass through the ionosphere?
4
How is it determined that the X-ray and radio intensity come from a magnetic field bridge between two clusters of galaxies?
4
Estimate the number of pixels required to map the full primary beam of a Radio Telescope station
1
Why did it take five years to "figure out" how to use astrometric calibration sources to deblur LOFAR images?
0
How does the Latvian branch of LOFAR radio telescope array communicate its data without a network connection?
1
What could be observed with LOFAR in 230 MHz - 10.0 MHz wavelength?

1
Why did it take five years to "figure out" how to use astrometric calibration sources to deblur LOFAR images?