If one looks up at the night sky, the Stars appear to be so close to one another and yet they are very, very, far away from one another. Why is this?

When I stand in a crowd, I might be able to see hundreds of people. I turn to look at my friend beside me, and in the distance, I see someone else I know. Their faces may look like they're right beside each other (ignoring visual cues like the relative size of their heads), and yet the second person may be close to the other side of the crowd. 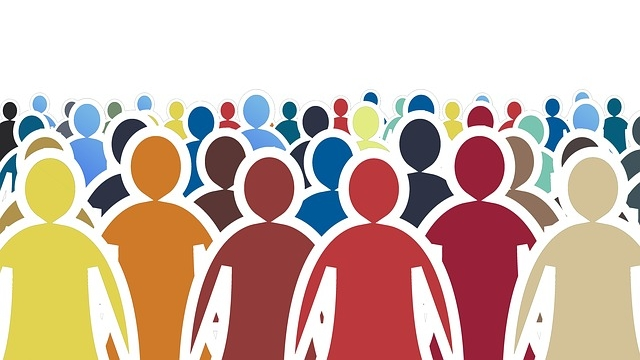 When we look out at the night sky, we see stars that are close (like my friend), and stars that are far away (like the person in the background). Because our eyes/brains are, frankly, rubbish at judging distance when there are no visual cues such as relative size, it doesn't look like those two stars are very far apart from each other. Consider this region of the sky around the Southern Cross, one of my favourite regions: 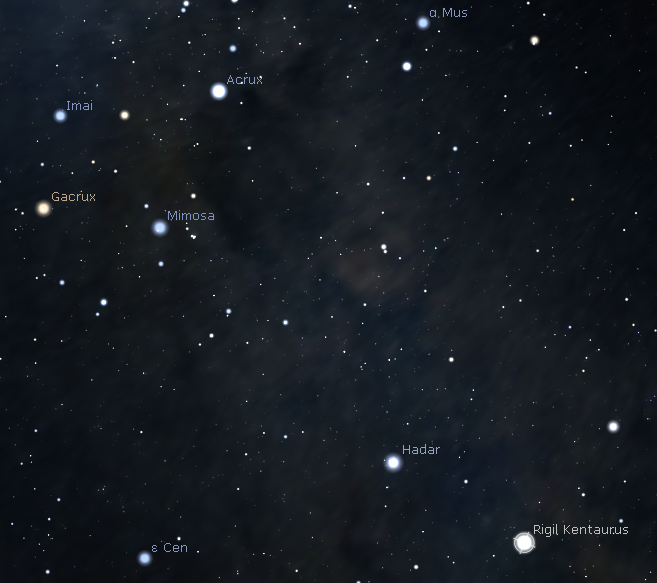 Rigil Kentaurus is the closest easily-visible stellar system to the Sun, at just 4.4 light-years away (that is, when I see it tonight, I'll see it as it was 4 years and 5 months ago, because that's how long the light has been travelling on its way to Earth). The brightest star to the left of it, Hadar, is over 520 light-years away, or 120 times as distant. In fact, some of the dimmer stars in the view above are thousands of light-years away, and yet we can see them in the same field of view.

Just as I can see my friend and the other person in my same field of view, so we can see stars that are separated by huge distances.

Because the distances between stars are so incredibly vast that "astronomical" is used to describe extremely large numbers, and because the farthest star you are looking at could be a thousand times farther away than the nearest one you see in the same view, the apparent nearness of two stars in the sky is an optical illusion.

Part One: The Sky Dome

The sky appears to be a dome with all the stars stuck on the inside of it.

If you hold out your hand at arms length you can cover two stars that appear close to each other with two of your fingers. Since your hand will not touch the imaginary sky dome you will know that it is actually more than arm's length away from you and the stars are more than an inch or two apart.

If you can see a horizon with trees, buildings, and hills in front of the sky dome you will know that the radius of the sky dome must be greater than the distance to the farthest object on the horizon.

Most people never went more than 10 or 20 miles from their home in their whole lives. If the sky dome looked the same wherever they went, they had to assume that i thad a radius of at least 10 or 20 miles.

So two stars on the sky dome would be 0.349 miles apart for each degree of arc they are separated by.

I guess that many billions of children who assumed at first that the sky dome and the stars were just out of reach later realized that the stars had to be at least thousands of feet and maybe miles away.

Some people traveled farther. Some people might believe the sky dome had a radius of at least 100 miles, which would mean that stars would be separated by 1.773 miles for every degree of arc between them.

Some people might believe the sky dome had a radius of at least 1,000 miles, which would mean that stars would be separated by 17.73 miles for every degree of arc between them.

And in time some people realized the world was much larger than a mere 1,000 miles radius, meaning the sky dome had to be much larger.

Some ancient ciivlizations, such as the classical Greeks, eventually realized that the Earth has a sphere shape. This meant that the stars had to be attached to a star sphere instead of a hemispherical sky dome.

So it came to be believed that the stars were attached to the inner side of a vast sphere surrounding the Earth, and that the Sun, the Moon, and the planets Mercury, Venus, Mars, Jupiter, and Saturn were attached to transparent spheres which surrounded the Earth but were inside the star sphere. Since the Moon sometimes eclipsed the Sun and passed in front of planets the moon sphere had to be the closest one to Earth.

Hellenistic Greek philosophers managed to calculate the circumference and thus diameter of the Earth fairly accurately, and also calculated the diameter and distance of the Moon relative to the size of the Earth. So it becaeme known that the Moon was the equivalent of about 250,000 modern miles from Earth.

Which meant that the outermost sphere, the star sphere, could easily have a radius of a million modern miles or more. For each million miles of the radius of the star sphere, stars on it would have to be separated by 17,453.291 miles for each degree of arc between them.

Most ancient philosphers rejected this heliocentric theory and continued to use the geocentric theory. One argument they used against the heliocentric theory was that if the Earth circled the Sun once a year, the stars should appear to have different directions every six months - parallax. And no stellar parallax had ever been detected, and none would be for almost 2,000 more years.

Of course maybe the distance to the star sphere was so vast that no parallex could be detected with ancient Greek observing techniques, even from a baseline of hundreds of thousands or millions of miles. But most ancient philosophers couldn't bear the thought of such unimaginably vast distances.

It was easy to calculate the distances between the planets and the Sun relative to the distance between the Earth and the Sun (a distance called the Astronomical Unit or AU) using the heliocentric theory, so if the AU could be calculated the absolute distances between the Sun and the planets could be calculated. Since the star sphere had to be beyond the orbit of Saturn, the outermost planet then known, as estimates of the AU and the orbit of Saturn increased, the minimum size of the star sphere increased, and I think that more and more astronomers became convinced that there was no star sphere, that stars were as large as the Sun and scattered through space at different distances from Earth.

The Milky Way appears to be a faint band of light in a circle around the sky.

Actual proof of the Milky Way consisting of many stars came in 1610 when the Italian astronomer Galileo Galilei used a telescope to study the Milky Way and discovered that it is composed of a huge number of faint stars.[28][29] In 1750 the English astronomer Thomas Wright, in his An Original Theory or New Hypothesis of the Universe, speculated (correctly) that the galaxy might be a rotating body of a huge number of stars held together by gravitational forces, akin to the Solar System but on a much larger scale. The resulting disk of stars can be seen as a band on the sky from our perspective inside the disk.[30][31] In a treatise in 1755, Immanuel Kant elaborated on Wright's idea about the structure of the Milky Way.[32]

So by then astronomers seem to have definately abandoned the idea of the star sphere.

The length of the AU was first measured in 1972, and astronomers have made more and more accurate measurements by various techniques ever since.

Astronomers tried measuring stellar parallax with more and more advanced instruments and techniques and the minimum possible distance to the stars kept getting larger and larger, thus making it more and more likely that the stars were objects like the Sun.

Finally, in the 1830s, the distances to three stars, 61 cygni, Alpha Centauri, and Vega, were measured. And those distances were so great that some of the astronomers who made the measurments chickened out and couldn't believe tham. The measurer of the parallax of Alpha Centauri refused to publish his result until the distance to 61 Cygni, more than twice as far, had been published, and the measurer of the distance to Vega cut his original, and fairly accurate, distance in half to make it seem more reasonable.

In the last 190 years more and more advanced techniques have measured the parallaxes and distances of tens, hundreds, thousands, and now millions, of stars.

Even the closest known star to the Sun, Proxima Centauri, is about 4.246 light years, or 1.30 parsecs, from the Sun.

A list of the stars which are the brightest as seen from Earth will reveal vast difference in their actual brignesses and their distances from Earth. Some are relatively faint stars which appear bright because they are close. Others are very bright stars which are veru far away. Here is a link to such a list including 93 stars:

The stars in the constellation Orion look close together in the sky, but their distances are different. For example their approximate distances are: Rigel 860 light years (LY), Betelguese 700 LY, Bellatrix 240 LY, Alnilam 2000 LY, Saiph 720 LY, Mintaka 900 LY, and Alnitak 820 LY.

Alnilam looks fairly close to Bellatrix in the sky, but is about 1,760 light years father away, or about ten quadrillion, three hunded and forty seven trillion miles farther from Earth.

Because the distances between stars are so incredibly vast that "astronomical" is used to describe extremely large numbers, and because the farthest star you are looking at could be a thousand times farther away than the nearest one, the apparent nearness of two stars in the sky is an optical illusion.

19
Why do stars appear to twinkle?
8
Why are there no stars on New Horizons images of Pluto
2
Relationship between metallicity and color? Should Pop. I stars be blue?
3
Is night sky getting brighter day by day?
5
When did astronomy first discover that the stars are bigger than the moon?
2
Could population III stars develop directly into population I stars?
9
What's the white glow around this star?
7
Visible Stars in Andromeda Galaxy