Astronomic objects (and their distribution functions) appearing in an old computer game?

Many decades ago, when I learned coding, I was also reading a (red) book on the programming the 8080 processor which was full of code listings and their description. I was in particular fascinated by the astronomical objects references in a text adventure similar to Invasion Force, with a central map, and some navigation control on the right, similar to the following screenshot: 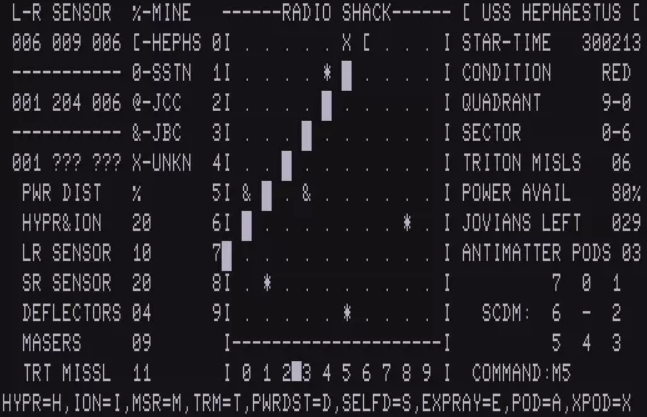 I never played that game (I never had a computer with that processor), but I enjoyed reading the source code and its description. The idea was that you could travel around with your space craft (and non-realistic velocities, pun intended) and beside shooting other star ships, which was probably the actual goal, you had to avoid black holes, and make sure that once you are in a certain solar system, you are not too close to comets, etc. The later part was the thing I am after. There was some interesting distribution function in the code which randomly placed stars (with and without planets) into the game map, as well as comets, rogue planets, black holes (if I remember correctly).

Does anybody know more about the game and the astronomical objects occuring there? Or even about the red book with the programm code listings?

Browse other questions tagged black-hole comets game distribution-function or ask your own question.