How was a rock on the surface of asteroid 101955 Bennu first observed from Earth (Benben Saxum)?

It's hard to imagine what the surface of asteroid Bennu might look like - it's shortest distance from Earth still 250,000 miles away - but the video "Tour of Asteroid Bennu" brings us on a journey to see this landscape up close.

On August 9 and 11, 2021, the video produced at NASA's Goddard Space Flight Center in Greenbelt, Maryland, will be featured in the SIGGRAPH Computer Animation Festival Electronic Theater - a high honor for those in the graphic visualization field.

While the graphics are fantastic and the "tour of Bennu's rocks" is illuminating, the narration is... well... mostly serial mythology factoidisms.

Nonetheless the serial factoids about various rocks on Bennu make it worth a listen.

In the creation stories of ancient Egypt, the universe began as a formless, endless expanse of water. From this primordial sea arose the primordial mound: Benben.

It was upon this rock that the god Atum settled, in the form of the Bennu bird, and sent forth the call that shaped creation.

The story of Benben hearkens to the mounds of fertile silt that once emerged from the receding floodwaters of the Nile, and it provides a fitting namesake for the tallest boulder on Bennu.

Protruding by over seventy feet, Benben Saxum is so tall that it was first detected from Earth. Now, we can appreciate this monumental feature in detail using data from OSIRIS-REx.

Question: How was a rock Benben Saxum on the surface of asteroid 101955 Bennu first observed from Earth? What instrument and observational technique was used in this rock detection? 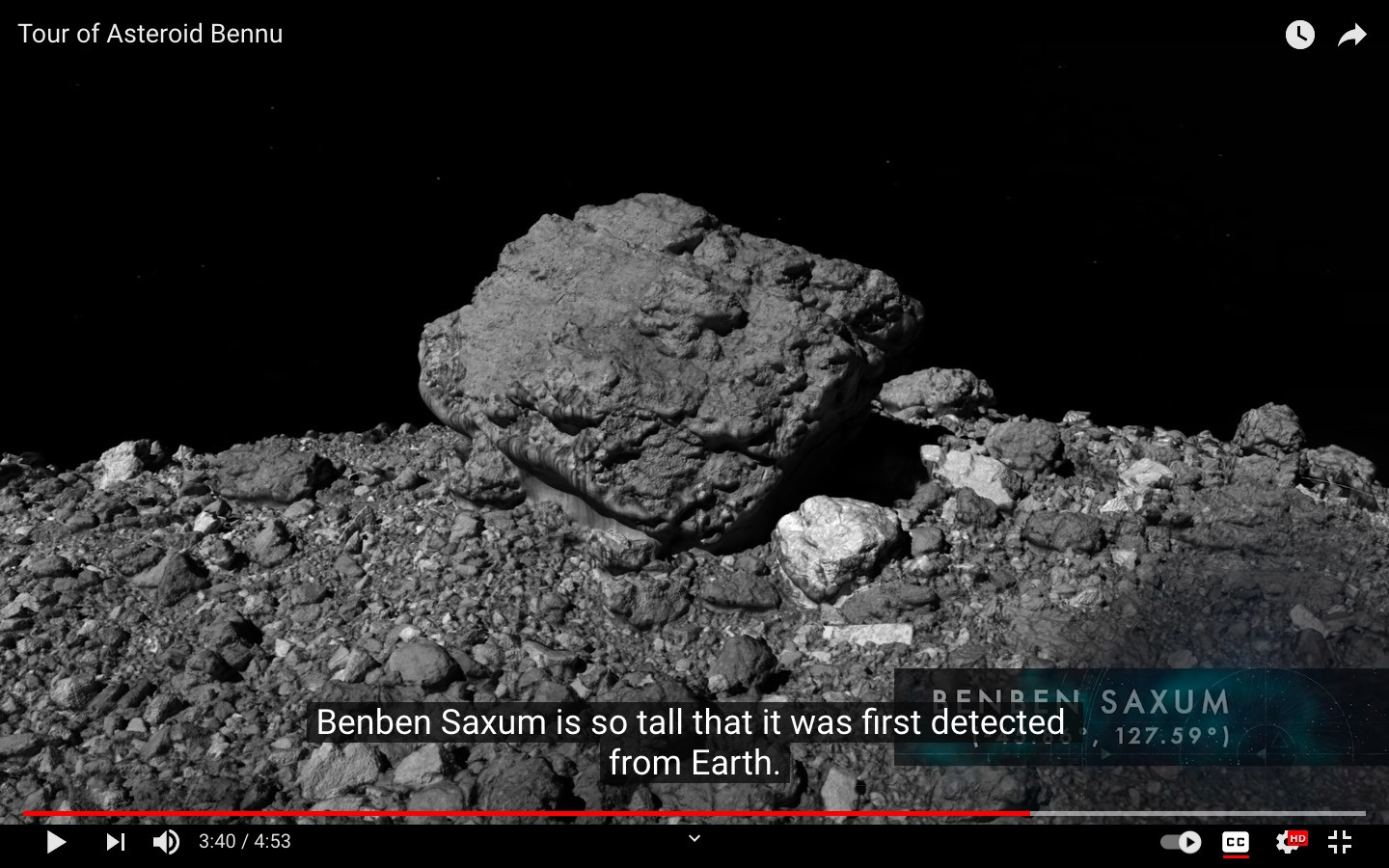 I think it is the "boulder" discovered by Nolan et al. (2013). They used radar images from two ground-based observatories, from two different passes, to perform shape modeling:

The radar observations with Arecibo and the Goldstone planetary radar systems were carried out shortly after discovery, from 21 to 25 September, 1999, and again from 16 September to 2 October in 2005 (Table 1). Further radar observations obtained in September 2011 had too low a signal-to-noise ratio (SNR) to be useful for characterizing the shape of the asteroid.

The modeling process is extensively described in the paper, which is quite technical... The resulting model was used to characterize surface features (among other things):

The shape appears fairly smooth at small scales, with some large-scale features. There is one 10–20 m boulder on the surface that appears in both 1999 and 2005 radar images, but no other small-scale surface features are evident down to the radar resolution of 7.5 m.

20 m is right below the seventy feet mentioned in your question, but given the uncertainty of the model, and the fact that it was the only prominent feature observed, we can be pretty confident it was Benben.

Edit: I finally found a paper mentioning that it is indeed the same boulder! Walsh et al. (2019) wrote (emphasis mine):

Boulders dominate the local topography of Bennu, some with heights >20 m (Fig. 1a). The most prominent boulder on Bennu was first detected with ground-based radar and estimated to be 10 to 20 m in diameter$^2$. This same boulder is apparent in PolyCam images and measures approximately 56 m in its longest dimension (Fig. 1a).

The caption of figure 1a states that said boulder is located at 48°S 125°E, which corresponds to the coordinates of Benben. The boulder is not mentioned by name in the paper, but its name was only approved in 2020.

Not the answer you're looking for? Browse other questions tagged observational-astronomy asteroids near-earth-object 101955-bennu or ask your own question.

3
What effect does the Moon have on the near Earth asteroid population?
1
How ready are we to deal with a asteroid/comet/giant-meteor on a collision course with Earth?
11
How was Earth's "quasi-satellite" 2016 HO3 "first spotted" and it's orbit determined?
1
Size and Mass of a typical "small" asteroid that impacts the Earth?
2
What is this thin, square-ish object on asteroid Bennu? How big is it?
2
Rendering asteroid orientation as seen from Earth
10
How well would the Moon protect the Earth from an Asteroid?
20
When was the martian dichotomy first observed?
13
How loud was the asteroid that killed the dinosaurs?