Does the average proton/electron density in a neutron star change with mass?

My understanding is that although electron degeneracy prevents beta decay, there are still a few protons and electrons hanging around. I also understand that, at least in white dwarfs, as the mass increases, more electrons are forced into higher energy/momentum states. Does this carry over to neutron stars, and if so, does it affect the density of protons and electrons?

The ratio of neutrons to protons (and electrons, since the fluid is neutral) does depend on the overall density. In an ideal n,p,e fluid, the ratio is of order 100 to 1 at average neutron star densities, but decreases towards 8 to 1 as the density becomes very large.

To understand this note that there will be an equilibrium set up, where neutrons can decay and place new electrons and protons at the tops of their respective Fermi seas, but the most energetic electrons and protons can combine to produce new neutrons. A simple argument based on minimising the total energy density of the fluid, whilst conserving charge and baryon number then leads to the following relationship between the respective Fermi energies: $$E_{F,n}= E_{F,p} + E _{F,e}\ .$$ NB: This assumes the species are completely degenerate. At neutron star densities this should be ok if interior temperatures are $\ll 10^{10}$ K, which should be true for neutron stars more than a day old. 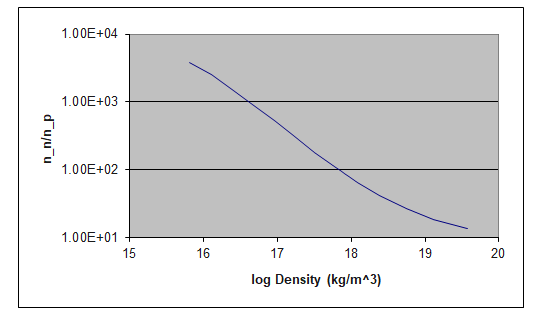 Neutron to proton ratio as a function of mass density for an ideal npe gas.

If you allow the density to increase drastically at the core of a neutron star, and you assume that only neutrons, protons and electrons can exist, then all the Fermi energies become ultrarelativistic, $$p_{F,n}=p_{F,p} + p_{F,e} = 2p_{F,p}$$ and thus $n_n = 8 n_p$.

In practice, as the neutron Fermi energy becomes large, other species are expected to appear, starting with muons at around $8\times 10^{17}$ kg/m$^3$ and then perhaps heavy hadrons, pions/kaons or even a quark plasma. At these densities, the neutron to proton ratio in an ideal n,p,e, gas should be around 10-20, but these non-ideal effects, which are still poorly understood, lead to considerable uncertainty and therefore considerable uncertainty in the structure and cooling rates, particularly of massive neutron stars which are expected to have the highest central densities.

Not the answer you're looking for? Browse other questions tagged neutron-star degenerate-matter .

7
Why is the number density of neutrons much larger in neutron stars?