It's hard to imagine what the surface of asteroid Bennu might look like - it's shortest distance from Earth still 250,000 miles away - but the video "Tour of Asteroid Bennu" brings us on a journey to see this landscape up close.

On August 9 and 11, 2021, the video produced at NASA's Goddard Space Flight Center in Greenbelt, Maryland, will be featured in the SIGGRAPH Computer Animation Festival Electronic Theater - a high honor for those in the graphic visualization field.

While the graphics are fantastic and the "tour of Bennu's rocks" is illuminating, the narration is... well... mostly serial mythology factoidisms.

Nonetheless the serial factoids about various rocks on Bennu make it worth a listen.

The first stop is Simurgh Saxum. This prominent boulder defines the asteroid’s prime meridian, and serves as the basis of its coordinate system.

In Persian mythology, the Simurgh is a large and benevolent bird, and the possessor of all knowledge.

Saxum is Latin for “stone.” 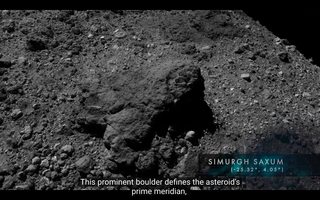 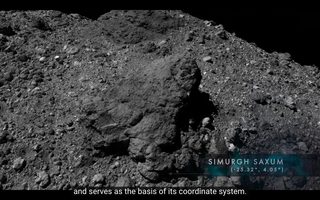 3
How was a rock on the surface of asteroid 101955 Bennu first observed from Earth (Benben Saxum)?

1
What is the difference between equatorial and ecliptical coordinate system?
0
How do comets and other solar system bodies gain energy to exit the solar system?
1
Does the KBO 2014-MU69 have two numbers and entries in asteroid databases? How did it get promoted to Major Body designation?
5
Difference between J2000, FK5 and ICRS coordinate systems? Which one does the Yale Bright Star Catalog use?
1
How to make projection from altitude and azimuth to screen with screen coordinate system?
3
How was a rock on the surface of asteroid 101955 Bennu first observed from Earth (Benben Saxum)?
3
How can you derive equations between the Horizontal and Equatorial system if the two systems have different centers?