Where can I find planetary rotational axis direction?

I can find axial tilt of planets easily, but that doesn't specify the direction of that tilt, i.e. planet's rotation axis may be anywhere in circle defined on a sphere by axial tilt value. And I can't google for obliquity direction as it only gives me obliquity value, not it's direction. Even NASA's HORIZONS only gives obliquity value. I expect there should be another angle, either from main body equinox, Earth's equinox, ascending node or maybe periapsis, that with axial tilt and orbital elements would define direction of planet's rotation axis. I know that the rotation axis precesses, but that takes thousands of years, and compared to time from J2000 it's practically neglectable (or at least it's easier to find precession rate and make a correction for it, knowing some starting value).

PM 2Ring posted the answer in the above comment. The direction of each planet's rotational axis in RA/Dec can be found in the table here: en.wikipedia.org/wiki/Axial_tilt#Solar_System_bodies.

Astronomers have defined a coordinate system on the Celestial sphere, with z-axis coincident with Earth's North Pole, and x-axis pointed to the First Point of Aries (aligned with the vernal equinox). Two angles define a point on the celestial sphere: right ascension and declination are analogous to longitude and latitude respectively as shown from this wikipedia plot. 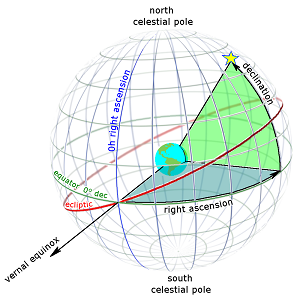 Uranus' North Pole direction had RA/Dec of 257.31, −15.18 degrees according to the wikipedia table from the IAU at 0 January 2010, 0h TT, putting it in the hydra constellation (graphic from Wikipedia) at that time: 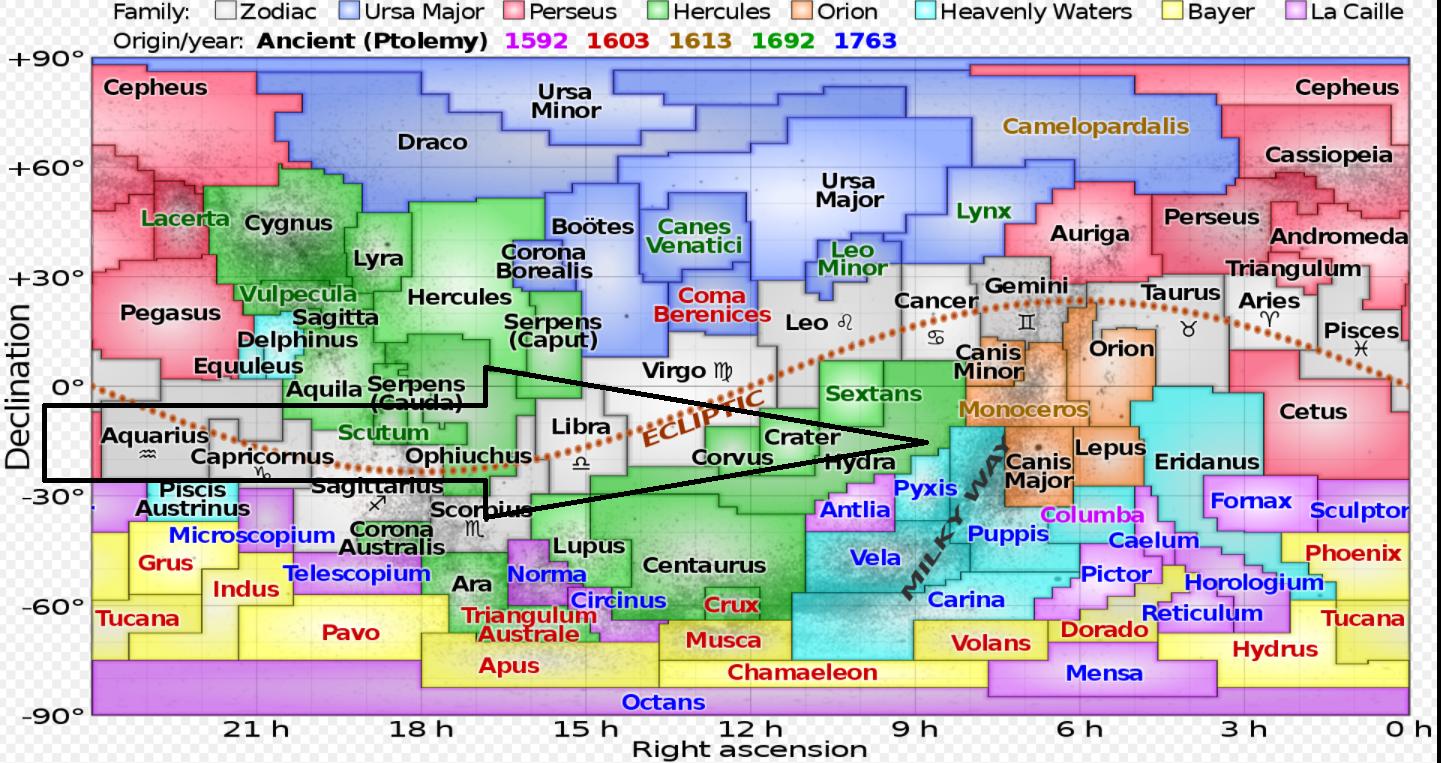 Not the answer you're looking for? Browse other questions tagged planet orbital-mechanics positional-astronomy .

0
Given a location and a time on another planet, how do you determine how many hours before or after sunrise is it there?

1
How precisely is planetary tilt defined (the tilt direction, not just the angle)?
36
Where can I find the positions of the planets, stars, moons, artificial satellites, etc. and visualize them?
3
How to get the axial tilt vector(x,y,z) relative to ecliptic
7
What are the problems that need to be taken in consideration when trying to find planetary position by using jpl ephemerides?
1
Is a year really 365.24 days, or is it 365.2564 days like I remember?
2
Where can I get J2000 epoch initial mean longitudes for all planets and celestial bodies?
15
Can the paper narrowing Solar System's barycentre to within 100m help find Planet Nine?
4
Where can I find a list of retrograde Milky Way stars?