How many iridium layers do we know, besides the K-Pg one (the dinosaur killer "smoking gun")?

The hypothesis of a large asteroid impact playing a role in dinosaurs extinction was strengthened by the discovery of a global iridium anomaly in the geologic record, at the Cretaceous–Paleogene (K-Pg) boundary.

Given we still have several unconfirmed impact craters, for example, the 21 km diameter São Miguel do Tapuio structure centered at 5°37.6′S, 41°23.3′W in Brazil(1), close to my city: 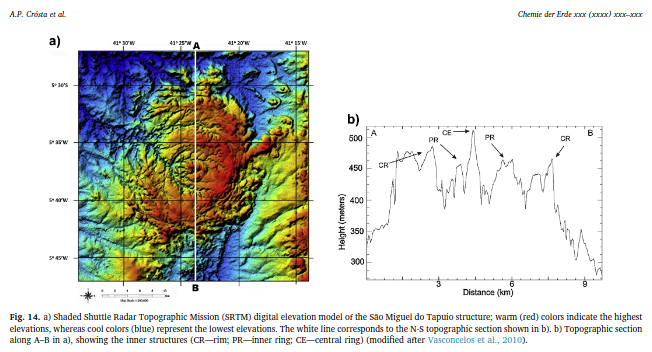 Wouldn't a systematic search for other iridium layers in the geologic record help prove/disprove many structures like this as produced by a impact event? Or even know about impact events that were previously unknown, because the resulting craters were completely eroded and became unrecognizable? Global petroleum exploration surely left a lot of rock plugs that could be searched for such layers. Yet the only iridium anomaly I see people writing about is the famous K-Pg one. So, how many of these do we know? Or has nobody ever bothered seeking them?

There are other iridium anomalies, particularly the Devonian-Carboniferous boundary (D-C boundary), about 350 Ma ago. The K-Pg boundary is only 66 Ma old.

At or very close to the D-C boundary, there exists a geographically widespread black-shale interval, and Ir abundances reach anomalous maxima of 0.148 ppb (Montagne Noire, France), 0.138 ppb (Alberta, Canada) 0.140 ppb (Carnic Alps, Austria), 0.156 ppb (Guangxi, China), 0.258 ppb (Guizhou, China), and 0.250 ppb (Oklahoma). The discovery of global D-C Ir anomalies argues for an impact-extinction model. However, nonchondritic ratios of Ir to other important elements and a lack of physical evidence (shocked quartz, microtektites) do not support such a scenario. The fact that all Ir abundance maxima are at sharp redox boundaries in these sections leads us to conclude that the Ir anomalies likely resulted from a sudden change in paleo-redox conditions during deposition and/or early diagenesis.

the anomaly coincides with a stromatolite bed containing the fossil cyanobacterium Frutexites; iridium, platinum, iron, manganese, cobalt, arsenic, antimony, and cerium are preferentially concentrated in filaments of this organism, with concentrations ranging from two to five times that of the matrix. It is possible that Frutexites extracted these elements directly from seawater, without the need for their derivation from an extraterrestrial source.

When considering meteorite/bolide impacts on Earth one needs to consider when the impact occurred and what has happened to the Earth since then.

It is thought that the total amount of iridium in the planet Earth is much higher than that observed in crustal rocks, but as with other platinum-group metals, the high density and tendency of iridium to bond with iron caused most iridium to descend below the crust when the planet was young and still molten.

So any iridium that may have been present on the Earth's surface during its early history is most likely now locked in rocks below the Crust.

The discovery of iridium is intertwined with that of platinum and the other metals of the platinum group. Native platinum used by ancient Ethiopians[34] and by South American cultures always contained a small amount of the other platinum group metals, including iridium. Platinum reached Europe as platina ("silverette"), found in the 17th century by the Spanish conquerors in a region today known as the department of Chocó in Colombia.

Within Earth's crust, iridium is found at highest concentrations in three types of geologic structure: igneous deposits (crustal intrusions from below), impact craters, and deposits reworked from one of the former structures. The largest known primary reserves are in the Bushveld igneous complex in South Africa, (near the largest known impact crater, the Vredefort crater) though the large copper–nickel deposits near Norilsk in Russia, and the Sudbury Basin (also an impact crater) in Canada are also significant sources of iridium.

As for Norilsk, the Popigai crater is 880 km from Norilsk. It was created 35 million years ago. It created an iridium enriched layer that has been detected on land in the Massignano section near Ancona in Italy and in marine sediments around the world.

So such layers exist, they're just not well known.

Not the answer you're looking for? Browse other questions tagged asteroids impact geology crater chicxulub .

7
How can we tell if the asteroid 2013 TV135 will hit Earth in 2032?
3
Would a killer asteroid shattered into thousands of pieces produce the same devastation?
5
How often do meteorites hit the Earth?
17
How would the Tycho Impact have appeared from Earth?
9
How did the Archimedes crater fill with lava?
28
How early could we detect an asteroid the size of the one that caused the extinction of the dinosaurs?
13
How loud was the asteroid that killed the dinosaurs?
3
How did the mountain range form in Galle crater?