What's the expected distribution of planet masses in a given system?

Given that the mass of a planet at a given orbital distance r is dependent on the protoplanetary material in the neighborhood of r at the time of formation (assuming no planetary migration), what functional form do we expect the masses of planets around a star in theory?

My initial guess was $M(r) \propto r e ^{-r} $, which is roughly similar to our own solar system (with a minimum near the origin, a peak at Jupiter, and then decreasing as you move out again). This is from taking a guess to the density of of protoplanetary material around a young star as $e ^{-r} $, and then multiplying this by the volume of a ring at distance r from the star, $ 2 \pi r \cdot dA$.

Is my guess correct? Do we expect planet masses to be distributed in such a way? Or is there another functional form that is more accurate?

At zeros order such assumption might be made, but a powerlaw relation is more common and accepted.

Also a protoplanetary disk is more complex as is the planet formation process which may include radial migration of the protoplanets. So the mass $m(r)$ available at a distance $r$ might not be exactly representative for the planetary mass found at that distance later on.

Weidenschilling's reference model from 1977 for the minimum mass solar nebular gives a density variation of the nebula as $$ \varrho(r) \propto r^{-2} $$ and the column density (thus all matter vertically integrated or considered compressed to the mid-plane) as $$ \sigma(r) \propto r^{-1}. $$ That is gas and solids combined, but given good mixing, this describes also the (initial) radial distribution of solids; typically a solid to gas mass ratio of 1:100 (minimum) to 3:100 (dense) is considered.

Beyond that, models get more complex, if you start to take into account density variations throughout the disk imposed by the different condensation temperatures of different materials. The most notable of these is the snowline at around 3...5 astronomical units which increases the available mass of solids for planetesimals significantly. So you have to introduce something like $$ \Sigma^{MMSN}_{solid}(r) = 7.1F_{ice}\left(\frac{r}{1AU}\right)^{3/2} \qquad \mathrm{with}\qquad F_{ice} = \begin{cases}1, r < r_{ice}\\ 4.2, r \ge r_{ice}\end{cases} $$ (see Min et al (2011), who cite Thommes and Duncan (2006) for this equation.

Now, once the protoplanets formed this way, the larger ones will start interacting with the disk and through that also with eachother. Planetary migration WILL occur at least to some degree. That's an area which is still in ongoing research and a lot of ideas and processes have been brought forward in the last decade or two on this topic - and IMHO no "final decision" can be made there yet.

Thus it might actually be worthwhile to analyse the known exoplanet systems to give an idea of the radial planet mass distribution (a thing done in this area of research anyway to benchmark which types of system a disk and / or migration model can explain). The type impossible to explain without migration are the hot jupiters, thus giant planets in close-in orbits which orbit their host star within days, even closer than Mercury in our own solar system. Given this, there is no general formula available which gives the planetary mass as a function of radial distance. Even when the observation bias acts in favour of detecting giant planets close-in, this is some process which does happen often (plot from exoplanet.eu): 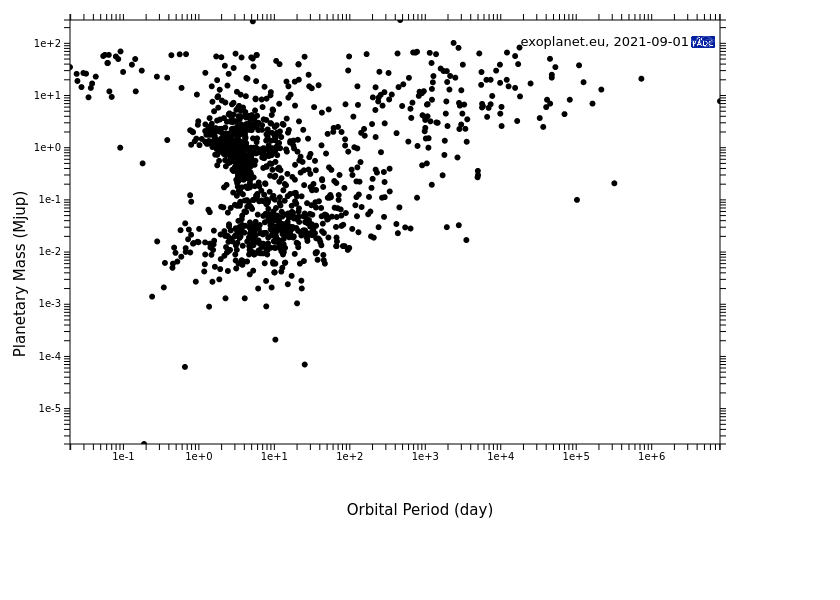 Looking at the systems with multiple known planets seems like the way to go - yet I am not aware of a very recent such analysis. The best I currently have at hand is this text by Davis et al. on the stability of systems.

Not the answer you're looking for? Browse other questions tagged planet planetary-formation planetary-science planetary-systems solar-system-evolution or ask your own question.

2
Frequency of planet masses in any given star system?

12
How to calculate the expected surface temperature of a planet
4
Ejected planets during the early stages of the formation of the Solar System
6
Currently proposed ways to distinguish between a really big planet and a really small star
1
How to find the Orbital Period of two Binary Planets around a Single Star?
5
Can the order of planets change in a young planetary system?
8
How likely are planets to form after neutron star collisions?
22
Is the closest planet to another planet always the innermost planet?