Can large scientific telescopes observe the Moon without being damaged?

When I look at the full Moon through my 10cm telescope, it is so bright that it hurts. Can large scientific telescopes observe the moon at all? Does that require special protection equipment? Or dedicated telescopes (or none at all)?

In particular, the E-ELT (European Extremely Large Telescope) will have a mirror with a 39m diameter. If it were pointed at the full moon, would that damage the science instruments? Would that generate a significant temperature at the focal point?

No chance of damage (the giantness of the telescope makes little difference!), but these cameras can not shoot at a shutter speed of 1/1000 second, so the lit part of the Moon is out of reach due to overexposure.

The bright part will probably be too bright to easily image with a deep field camera because it's designed for integration times of seconds to minutes.

The hardware won't be able to provide a 1/1000 second exposure, so only objects in shadows (or the unlit side of the Moon) have a chance of being exposed.

When I look at the full moon through my 10cm telescope, it is so bright that it hurts

Because of conservation of etendue (see below) the Moon has the same surface brightness when seen through any telescope or binocular. It's just that it's bigger and so is spread over a larger area of your retina.

It's just like looking at 100 full Moons in the sky, but each Moon is no brighter than the one we see now.

Put in less than precise but simple wording, magnification increases the size, but not the apparent brightness per unit area of extended objects.

There's no chance of damage.

This answer to Can a telescope ever increase the apparent luminance of an extended object? says No and explains that this is the result of conservation of etendue

In big telescopes, the focal planes are also pretty huge.

So per square micron, the image of the moon will be $(2.8/1.23)^2 \approx 5$ times brighter on the worst case1 telescope's focal plane than on our retina (seen through a telescope or by eye), that's not going to hurt the silicon.

After all we often take outdoor photos with the Sun in the field of view and that doesn't even melt the polymer coatings and color filters on top of the CCD!

1lowest f/no. big telescope so brightest per unit area on the sensor. 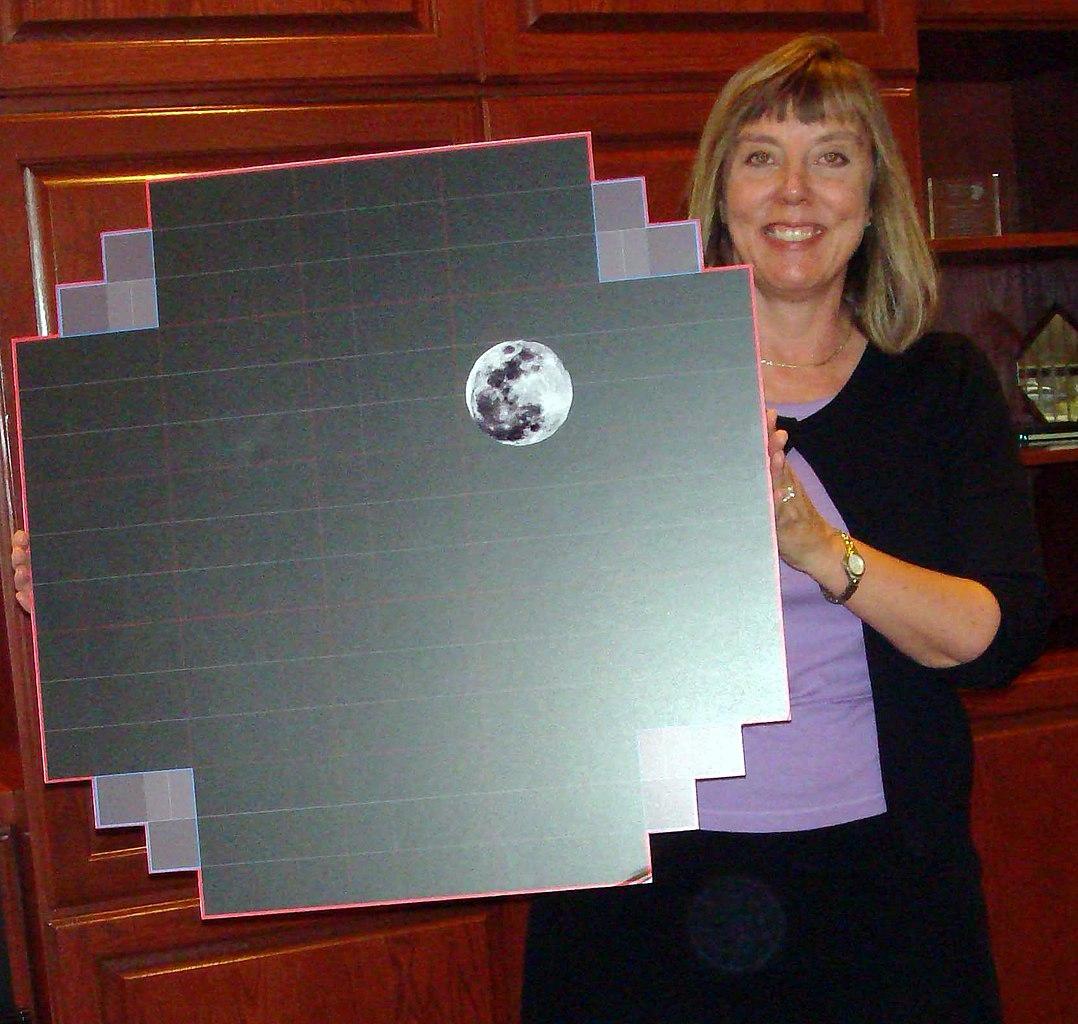 Suzanne Jacoby with the LSST focal plane array scale model. The array's diameter is 64 cm. This mosaic will provide over 3 gigapixels per image. The image of the moon (30 arcminutes) is present to show the scale of the field of view.

It could damage the instruments, but it can't generate very significant temperature. You can't use optics (mirrors, lenses) to heat something more than the temperature of the thing itself! If you could you would be transferring heat from something cold to something hot, without doing any work, and that breaks the second law of thermodynamics.

The surface of the moon is at about 100*C, so thermodynamically it is impossible to use moonlight to heat something above that temperature. In practice, even with a large mirror, you don't get lots of heat. At least not enough to melt the CCD.

However, the instruments are not designed to deal with that much light for a long time. This could be handled by simply using very short exposures.

It probably depends on the details of the equipped sensor(s).

Let's assume the sensor size in the focal area is around 10cm x 10cm (a typical size, if you look at VLT instrumentation).

So the irradiation at the focal area hence is:

Thus we end up with an irradiation intensity about 1/3 of that of the naked sun - that's something typical CCDs can still cope with - though I'd caution to do so for extended exposures and not attach an objective for visual observation - it would damage your eyes. Depending on the detailed thermal properties of the sensor, its cooling and fixation might sustain damage when some elements become overheated due to prolonged exposure. This is an especially likely scenario if filters are involved as often employed - they are not designed to absorb much energy, they are designed for low light situations and wavelength precision.

Not the answer you're looking for? Browse other questions tagged the-moon telescope e-elt .

4
Can a telescope ever increase the apparent luminance of an extended object?
2
How does eyepiece exit pupil diameter affect image clarity and viewing experience?

5
Is it possible to steer the sight of a Liquid Mirror Telescope using a plain mirror scheme? If yes, why hasn't it been done?
3
Telescope choice
9
What is a quaternary mirror and why does the E-ELT need one?
21
Why are wavelengths shorter than visible light neglected by new telescopes?
3
Are these parallel lines I'm seeing in this image a real pattern on the Moon?
5
lousy mirror corrected by software
5
Can the transit of satellite in front of Sun be visible in 10-inch telescope?
2
How does eyepiece exit pupil diameter affect image clarity and viewing experience?
6
Could someone explain what is wrong with my telescope, and what should I be able to see with it?