Is the Astronomical Unit measured from the Sun's center or from the surface?

1 AU is defined as the distance between the Sun and the Earth, which is roughly 150 million km. But is this supposed to be from the Sun's center (Solar system's center of mass) or from the Sun's surface which already is almost 696 thousand km from the center? That's not an insignificant difference.

Intuitively I would say this should be the distance between the centers of mass (for the other objects as well), but I'm really not sure. And I can't find the answer anywhere.

This is based not on a distance to the sun (which varies) but on the shape of an ellipse that closely approximates the orbit of the Earth. An ellipse has two foci. In a Keplerian, two-body orbit, the combined centre of mass of the two bodies lies at the focus of the ellipse. For the Earth/sun this is only an approximation since there are more than two bodies in the solar system.

An ellipse has a long axis, and half this long axis is called the semimajor axis. The original notion for the AU was that it would be the semimajor axis of the Earth. Equivalently it is the average of the shortest and longest distances of the Earth from the focus of the ellipse. And since, to a good approximation, the sun is at the focus of the ellipse, the AU is the average distance to the sun.

The actual semi-major-axis is slightly variable, due to perturbations of other planets. By 1976 a new definition was needed in terms of a theoretical, negligible-mass particle in a circular one-year orbit about the sun (in that definition it was the theoretical distance to the centre of the sun from the particle), and by 2012 the known accuracy of the AU was such that corrections would need to be made to account for General Relativity. It was then decided to fix the length, rather than try to account for ever more accurate measurements.

For comparison, the semimajor axis is measured as 149,597,887,500 m. This differs from the defined value by 10km. The actual distance to the sun varies by about 4 million km

The sun's center is not the solar system center of mass and sun is not so big for this question to be important. Just compute the ratio of the quantities — you will find that the difference is negligible.

There is a more important problem: the orbit of the earth is elliptical, not circular. So the distance to the sun is not constant.

Just take it as 149597870700 metres as the International Astronomical Union

James K's answer, which seems cogent and self-referential enough that I'm willing to buy it without researching his points would, by the logic of his points, require it to be the center of the sun. This is mainly because the foci are mathematical points, not smeared objects in real life that have "width", so to speak, and even vary as the sun pulses.

That variability in the sun's radius itself would militate against any possibility that the surface is the intended other end of the line measured by the AU.

However, given its current definition as an exact number of meters, divorced, however slightly in practice, from being a literal "that's how far the surface, or center, of the sun is from the Earth's surface, or center" kind of definition, the easy answer is to find how far the sun's center (or surface, whichever is easier to find) is considered to be from Earth, and calculate the other distance of the two, and see which is radically closer to the currently defined distance. The logic of the folks along the way who influenced the old values no longer matters: only which is a better match to the slightly separated from any exact correlation with a "real" (whatever that could even mean given the variables vary, constantly) physical system... only which is a better match to the defined value matters to the question's answer.

Prallax's question in Comments for Uwe's answer would be roughly answered by the idea that the measurement is taken from the Earth to an apparent position of the target star so that is what varies. If one decided not to have a fixed line between the sun and the star against which to relate the measured value, but rather to have a line that also moves to always be at the sun's surface (presumably the surface literally nearest to the Earth as we and the sun dance around each other during the year), then the mathematics would be hideously harder than one would desire...

So logically, the moving measurement being the Earth-to-star measurement, one would expect the sun-to-star relationship to be fixed to avoid that hideously harder math (the harder math which would benefit no one at all). Given a sensible desire to not complicate that math, one would expect it also go from the center of the sun to the center of the star so that as it moves with the Earth, it wouldn't move at all. Again, so to speak.

To reiterate, there being no value at all to complicating the math for a simple measurement, a simple system to relate the measurement to would logically include the other long leg of the triangle be fixed to as simple a set of choices as possible: center to center, sun to star.

If you look at the definition of a parsec in Wikipedia: 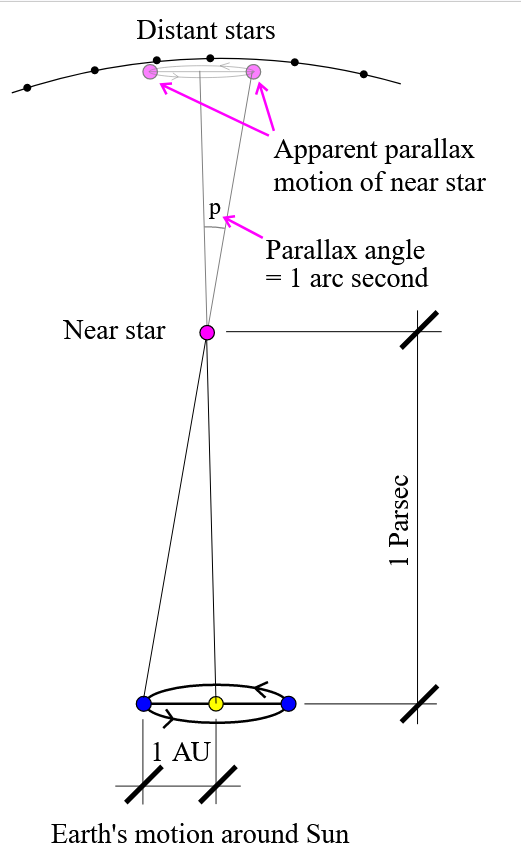 the distance between the left and the right position of the Earth should be 2 AU. Therefore the reference point must be the center of the Sun.

Not the answer you're looking for? Browse other questions tagged definition astronomical-unit or ask your own question.

2
How far above the Earth's surface does interplanetary space begin?
16
What is the most accurate measurement of the Astronomical Unit?