What are practical considerations for backyard radio-astronomy detection of black holes?

Evidently, direct observation of a black hole for an amateur astronomer, such as described for what professionals do in the question "How are black holes found?" would be nigh on impossible, so the observations would be based on their effects of the surrounding matter (specifically, accretion disks and jets) and more likely detecting the radiation signals.

Given that the locations of many black holes are known, what practical considerations would a backyard radio-astronomer need to consider to attempt to do detect black holes?

Amateur radio-astronomy detection of pulsars and gamma ray bursts are discussed practically in Introduction to Radio Astronomy (Society of Radio Astronomers), this question is to see what practical considerations would be needed to extend those techniques to detecting black holes.

The resolution/error box. Radioastronomy has always been hindered by the resolution, because it is inversely proportional to the size of the telescope and making larger telescopes (even with interferometry) is not always easy. No amount of modern technology can substitute for a large effective diameter. (When I say effective I'm including interferometry here; either way one needs a large area to build on).

Let's take a look at Reber's initial paper1 where he first mapped the sky: 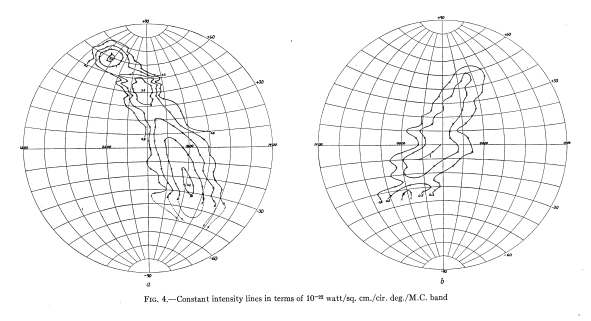 In the diagram on the left, from top down, the three peaks in the contour map are Cas A, Cyg A, and finally Sgr A. The latter two have black hole origins, the former is a supernova remnant.

The resolving power of Reber's telescope here seems to have been 6 degrees, and it was 31.4 feet in diameter (and he focused on a 1.9m wavelength).

Now, by the Rayleigh criterion, the angular resolution is proportional to the wavelength divided by the diameter. As mentioned before, this is the major limiting factor for radioastronomers, and will be what holds amateur radioastronomers from making great telescopes — amateurs usually don't have acres or land in which to build a good interferometer (let alone the precision), and single-dish telescopes can't be made too large by an amateur. One may notice that I'm citing rather old observations here, on old telescopes; however given that radioastronomy technology has not changed nearly as much as size has, it should be OK to compare amateur telescopes with the smaller telescopes of the past.

Now, Cyg A was the first to be identified as a black hole, even though the radio-brightness of Sgr A was discovered at the same time. I'm focusing the rest of my analysis on Cyg A for this reason, as it stands to reason that the first confirmed BH out of the brighter radio sources would have more prominent indicators that it is a black hole.

Let's have a look at Cyg A with a better resolution: 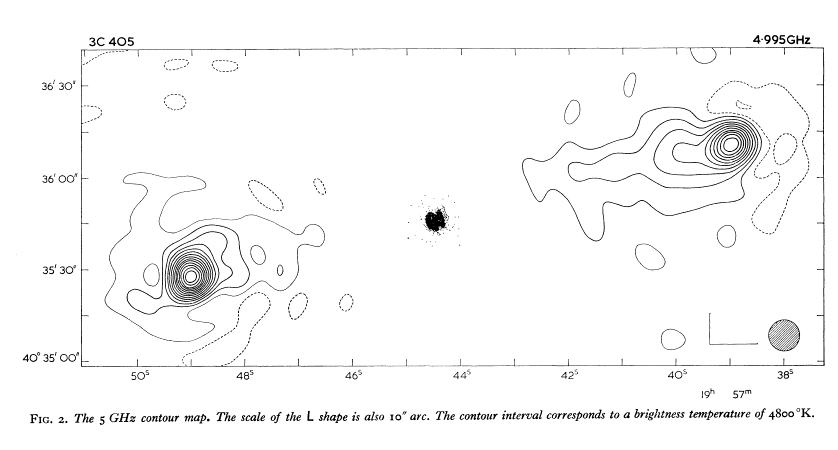 (From this paper2, using the 5km array)

Note that the black blob in the center is the actual galaxy (probably an optical photograph superimposed on the contour map).

We can see that the lobes are less than a minute wide. (The actual galaxy is around 50 arcseconds wide)

To me, the most interesting thing that one would like to see here are the gas jets coming from the central galaxy. As mentioned in my answer here, these radio-emitting gas jets are in a steady line over thousands of light years, indicating that they come from some sort of cosmic gyroscope which has been steady for very long. However, even with the Ryle telescope the 1969 people could not get a picture of them; just a slight hint of their existence from the shape of the lobes.

Alright, so no gas jets. What else can indicate a black hole? They could try to look at the lobes themselves. They do not directly indicate the existence of a black hole, but their shape hints towards them being formed from jets (this is pretty much in retrospect).

However, with lobe dimensions of less than an arc minute, there's not much an amateur can get here, either. It's possible that a really good amateur telescope would just manage to notice that there are two lobes, but not much else as far as I can tell.

The other interesting bits would be the central galaxy itself, but it's too small. In the optical region one may have a chance of seeing Baade's "colliding galaxies" (it only looks like a pair of colliding galaxies). The gravitational effects (lensing, etc) are really only visible in the optical and beyond, for it to be visible in the radio we would need to be very lucky and have a huge radio source pass behind Cyg A — not happening anytime soon.

I'm pretty sure that a similar analysis would work for Sgr A or any other black hole candidate; the gas jets would be too small for an amateur radiofrequency resolution, and the gravitational effects of the black hole would only work well in the optical and X ray frequencies.

another problem for an amateur looking for black holes is that the telltale signature of a black hole, coming in the form of continuous or bursts of X-rays and gamma rays, cannot be observed from the surface of the Earth, because the atmosphere (thankfully) protects us from that sort of stuff.

So that is why you need to go in space, or on the surface of a planet without atmosphere (the Moon would be suitable, Mars should do as well, since the atmospheric pressure is 6 millibars there and space rays come all the way to the surface, compared to 700-1000 millibars on Earth at sealevel), or send up your own space telescope, such as the likes of

40
How are black holes found?

40
How are black holes found?
19
What practical considerations are there for amateur observations of transiting exoplanets?
18
Jupiter FM - What are practical and inexpensive ways for the amateur detection of signals from Jupiter, especially of the transit of her moons?
6
What shape are black holes theorized to be?
9
How big a dish do I need for radio astronomy?
3
Current topics on Radio Astronomy and looking for advice
1
Can black holes be a subset of quark stars? If not, what are black holes made of?
1
What are detached black holes?
7
What radio frequency ranges are most beneficial for astronomy?