I've been trying to wrap my head around capabilities of current radio-astronomical spectrometry technology to isolate not too distant tenuous sources, say, chemical composition and density of the the interstellar medium right in the neighborhood of our Solar system. In essence, what is our local interstellar cloud made out of and how much of it is there: 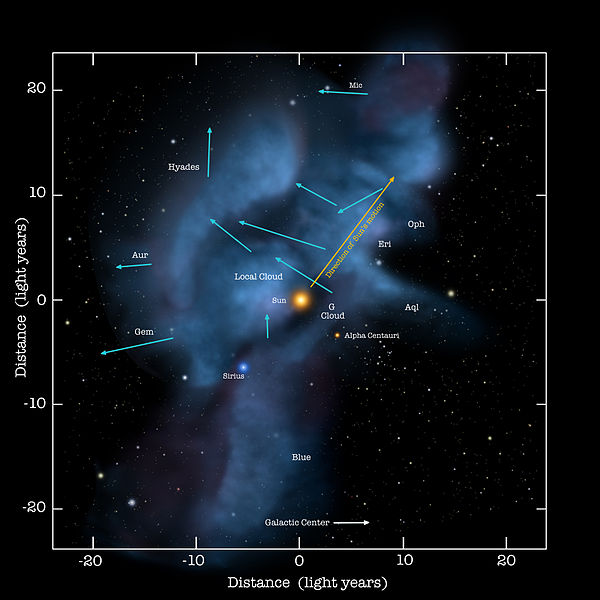 We've had much success so far in isolating distant radio wave sources and analyzing their hyperfine, i.e. molecular level composition. Same goes even for interstellar medium composition down to molecular ions of diazenylium (N2H+) that is surrogate to the presence of unobservable, nonpolar N2.

For example, P. Caselli et al. from the Harvard-Smithsonian Center for Astrophysics presented a paper (PDF) on J = 1 → 0 transition of N2H+ at 93 GHz toward the quiescent low-mass cloud core L1512 in Taurus, back in 1995. That is 18 years ago!

What I don't understand is, what's preventing us, with current technology, from isolating local low-mass formations in the radio wave spectra from its background noise and analyzing its hyperfine structure through radio-astronomical spectrometry? Is the signal to noise ratio simply unworkable and the density of the local cloud too thin to filter it out from its background? Or have such observations actually already been done, and we already have molecular data on the local cloud that I'm not aware of?

The first thing to notice is that the Local Interstellar Cloud, in which the Sun is evolving right now, is a fairly diffuse region, with a typical density of about one to a few particles per cubic centimeters. Clouds with such low density are actually mostly atomic; as you can see on this plot (Snow & McCall 2006, adapted from Neufeld et al. 2005): 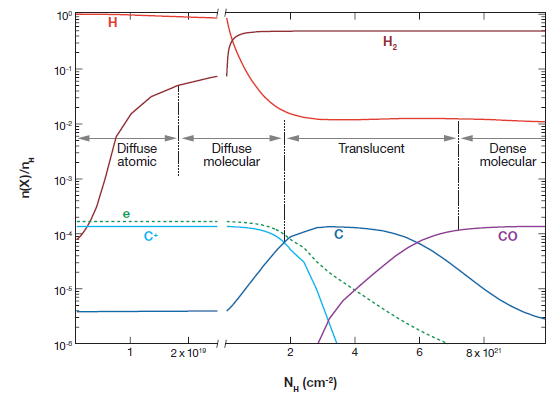 It is then quite challenging to observe molecules in this region.

Good news is, there is not only molecular lines to give informations about the physical properties (temperature, density, ionization, velocity structure and morphology) of the Local Interstellar Cloud. In particular, ultraviolet is a perfectly suited wavelength range to sudy this region in absorption, and there are some quite extensive studies of the subject (see for example Paper I, Paper II, Paper III and Paper IV of Redfield et al.).

Not the answer you're looking for? Browse other questions tagged radio-astronomy spectrometry or ask your own question.

6
Can astronomical radio sources be used as a verifiable randomness beacon?
7
Are there any astronomical phenomena that could emit strong radio waves with multiples of a discrete frequency?
3
Current topics on Radio Astronomy and looking for advice