Does the transition between total convection and partial convection cause a significant decrease in lifespan?

A star with less than a certain mass M, which is somewhere between 0.5 and 0.35 solar masses, is fully convective, the hydrogen in the core is constantly being replenished, so it takes much longer for the star to run out of fuel. A star with more than mass M has a radiative center, meaning the core can no longer be replenished. Does this cause a sudden and drastic decrease in the star's lifespan?

As already noted in another answer, there aren't many studies about the long-term evolution of low-mass stars because we're fairly sure they don't evolve off the main sequence within the life of the Universe. But the answer inspired me to (quickly and roughly) compute the main-sequence lifetimes of some (roughly) solar metallicity objects between 0.15 and 0.80 solar masses using a stellar evolution program. The models are fairly basic and I haven't the time to fully interpret them but they bear out the inference from the other answer. I refined my parameter space around the transition at about 0.39 solar masses. The lifetimes do appear to decrease more rapidly as the mass approaches the transition from below. 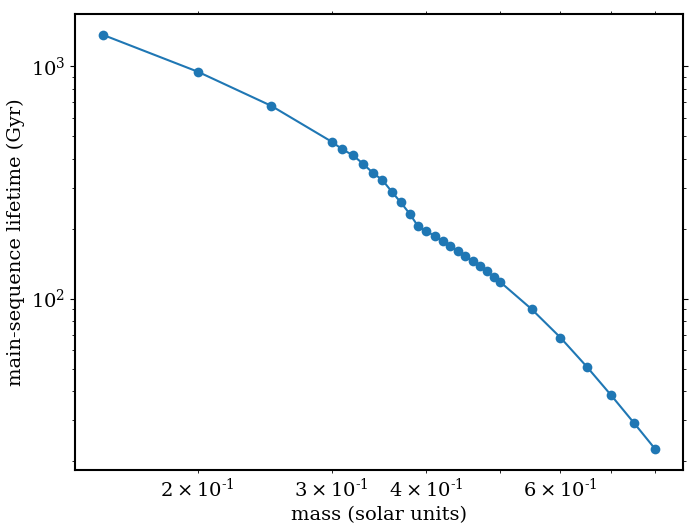 When looking up the issue, I found surprisingly few publication that deal with such low mass stars and provide figures for their lifespan. Namely, I have found only two:

The End of the Main Sequence: (1997) Laughlin, Bodenheimer, Adams

It deals with stars up to $0.25M_\odot$, so only the convective ones. Figure 2 contains a small subfigure with the values of the lifespan of such stars. The plot is small and difficult to read, but fortunately Wikipedia provides a larger plot from the same data in the Red Dwarf page.

Contains values for the duration of the main sequence and the core He burning for stars with $M>0.6M_\odot$. It gives them for two different metallicities (Z=0.004 and Z=0.008)

I wrote down the values of the lifespan of the stars provided in the two papers and made the following plot. 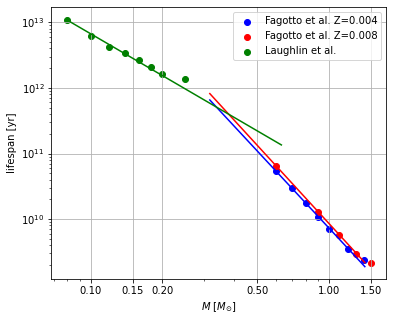 I have fitted the points with power laws, and it appears indeed that there is some kind of transition between the two regimes. But it could also be due to different parameters and methods used in the two papers. Therefore I am not able to give a definitive answer to the question.

Not the answer you're looking for? Browse other questions tagged star stellar-structure or ask your own question.

3
What is the difference between LMC and SMC?
5
Could non-supernova carbon, oxygen, or silicon flashes be observed?
0
The relation between the energy of star and heating effect
1
What is the difference between equatorial and ecliptical coordinate system?
4
Why does the adiabatic exponent decrease at the ionization zones?
6
Why does the sun have a convection layer and a radiation layer?
2
What does the opacity of a molecular transition mean?
4
How does pair production cause a pair-instability supernova instead of leading to the formation of a black hole?