If Proxima Centauri was replace with a quasi-star, would our telescopes be able to see it in fine detail?

Quasi-stars, if they ever existed, were stupid big and stupid bright; many times bigger, brighter, and more massive than any star supported by fusion can be. There's no question that it could be seen with the naked eye, but could our telescopes get detailed images of its surface?

As a side note, what effects would relpacing Proxima Centauri with a quasi-star have on our solar system, if any? Would it be like a second sun?

A quick calculation tells us that a quasi-star with a radius of 10 billion kilometers (a figure suggested by the Wikipedia page) at 4.25 lyr (Proxima's distance from the Sun) would have an angular diameter of 1.7 arcmin, which is about three times Jupiter's. 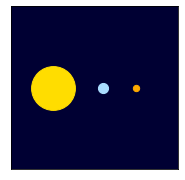 As a comparison, here from left to right there are the apparent sizes of the Sun, the quasi-star and Jupiter. Since we are able to take exceptionally detailed images of Jupiter, even from the ground, then we would definitely be able to study the surface of the quasi star in detail. 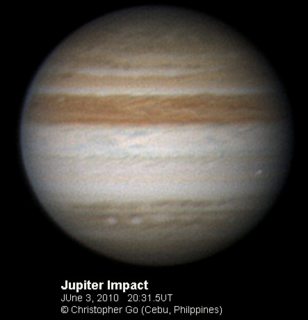 As for the last question, yes, it would be like a second Sun. A star with that radius, and a temperature of 10000 K (from Wikipedia) would have an apparent magnitude of -23, while the Sun has a magnitude of -26.7.

Most of the quasi-star's light would be in the UV, and so it would be blocked by the atmosphere, but it would emit in the visible enough to lighten up the night.

Not the answer you're looking for? Browse other questions tagged star telescope photography or ask your own question.

8
If we were to see the Sun with our naked eyes from the Orion belt, would all planets be encompassed inside the star? Is this calculable?
19
What would the effects be on Earth if Jupiter was turned into a star?
3
Enhanced Star-Gazing with Special Glasses
4
How to make a telescope for viewing planets, moon and DSOs using a convex lens of aperture 100 mm and focal length 200 mm and other lenses at home?
0
Hypothetically, if our sun was yellow would we still see "white" colours?
5
Which star has the faintest absolute magnitude (largest magnitude) yet is still visible with the naked eye from Earth (either hemisphere)?
2
How does eyepiece exit pupil diameter affect image clarity and viewing experience?