What percentage of the time can we see the moon during the day?

From sun rise to sun set what percentage of the time is the moon visible?

I saw one thing at the top of google saying an average of 6 hours a day but that seems like a weird way to answer it. Would that be 25% of the it’s visible

Any math or diagrams are much appreciated to better help me grasp it.

The New Moon occurs when the sun and moon are on the same side of the earth. On this day, if you could somehow see the moon (which one obviously can't in reality) you would see the moon being up in the sky for roughly the entire duration from sunrise and sunset.

During Full Moon, both are on opposite sides of earth. So the moon rises roughly when the sun sets and vice-versa, hence no time when you can see both together.

Now consider the first quarter from this image: 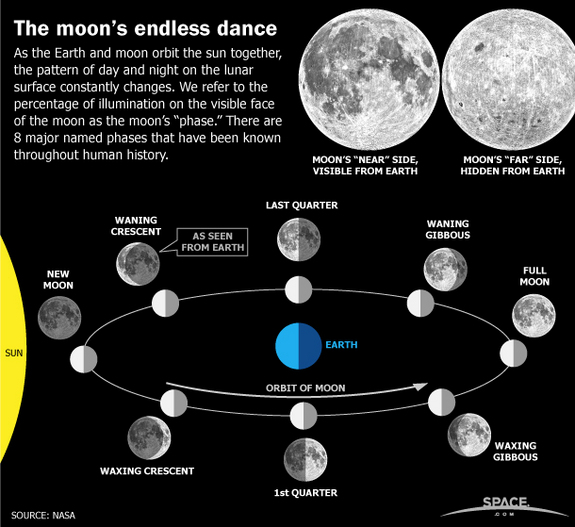 As is apparent, on the day of first quarter, sun and moon are at 90$^\circ$ to each other. Imagine it is noon, you are directly facing the sun. If you look to one side, you see the half moon just rising above the eastern horizon. Now imagine it is sunset. The sun would just be sinking on the western horizon. You would directly face the first quarter moon. So the sun and moon had a common time from noon till sunset, roughly six hours. This common time changes based on the relative positions of sun and moon i.e. the phase of moon.

As the moon progresses from New to Full, the common time gradually reduces from the full sunrise-to-sunset (12 hours) till 0 at Full Moon, and reverse in the latter half of the cycle. Since the change is smooth, passing through each phase at equal gaps of time (thanks to the Moon's near circular orbit), the average is given by the mid-value between 0 and 12, that is 6 hours or 25% of the day. It only means that over a full lunar cycle, there is an equal chance of seeing both sun and moon for 8 hours (6+2) and 4 hours (6-2).

This is only a rough estimate; in reality the New Moon is hardly visible, the Moon's orbit is slightly tilted and elliptical, and the Moon revolves even through the course of the day, so the number will slightly change.

Just to be obnoxious: both the Sun and Moon are above the horizon more than half the time because they have non-zero angular radius and all objects rise/set when they are geometrically 34 minutes below the horizon, due to refraction.

17
Why can we sometimes see the moon during the day?

17
Why can we sometimes see the moon during the day?
14
Why does the darkening of the Moon go from left-to-right during an eclipse?
9
Why can I see the whole moon during various non-full-moon phases?
3
Visibility of earth from moon during day-time of moon
4
How Soon Could a Waxing Crescent Moon Be Seen?
2
Jean Meeus - calculating moon rise, transit and set times - help isolating error in logic
3
How many days a month can you see a moonrise during daylight?
1
What was the day of the week for the total lunar eclipse (saros 61) that occurred on April 14, 32 AD?
1
Can the Celestron Powerseeker 127EQ observe the moon during day time?