Can we estimate the number of stars which have died in the observable universe?

We know there are currently between 10^22 and 10^24 stars in the observable universe, but can we make an estimate of how many stars have died so far? Or, in other words, how many supernovæ have taken place so far?

This ignores many things like whether the average of all galaxies look like the Milky way, whether the star formation rate changes over time, whether the fraction of stars that undergo a supernovae change over time, and probably many more things. Also ignores effects like how many supernovae would have had enough time for the light to reach us.

Rob's answer already gives a rough estimate. I will try to make it more precise by relaxing some assumptions.

How many star have been born in our universe?

The cosmic star formation history $\psi(z)$ is a function that gives, for every redshift, the density of star formation rate. It is usually expressed in units of $M_\odot$ $yr^{-1}$ $cMpc^{-3}$. The total mass of stars formed in a given comoving volume $dV$ at redshift $z$ in a time $dt$ is $\psi(z)dVdt$.

You can find the state of the art of the estimation of the cosmic star formation history in figure 9 of Piero Madau, Mark Dickinson (2014). 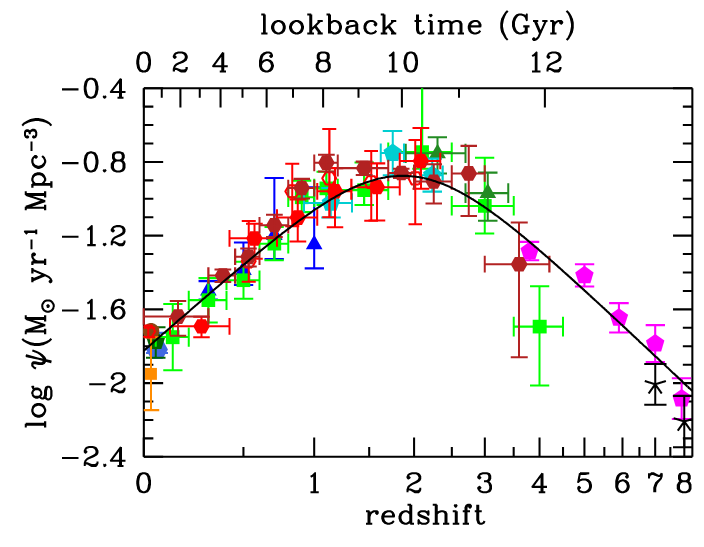 You can see that star formation reached a peak around redshift 2 and now it has dropped very low. This means that the supernova rate that we measure now in the milky way is much lower that the rate we would have measured some billion years ago.

Above $z=8$ very few stars had formed, and we can ignore them.

How many stars die as supernovae?

$\psi(z)$ tells us how many stars were born, so we need to know the fraction of these stars that died with a supernova. We know that small stars, like the Sun don't end their life as a supernova. Only more massive stars, with $m>8M_\odot$ have a chance to explode, and they do it after a few million years since their birth: almost instantly from a cosmic point of view. For this calculation, we can assume that every star with $m>m_{SN}=8M_\odot$ instantly goes supernova after its creation.

If we know (from $\psi(z)$) that a certain mass $M$ of gas has converted into stars, how many of these stars will have $m>8M_\odot$? The answer to this question is provided by the Initial Mass Function (IMF) $\xi(m)$. $\xi(m)dm$ is proportional to the number of stars that form with mass between $m$ and $m+dm$.

We can choose to use the IMF provided by Kroupa (2001), that is defined as a broken power law 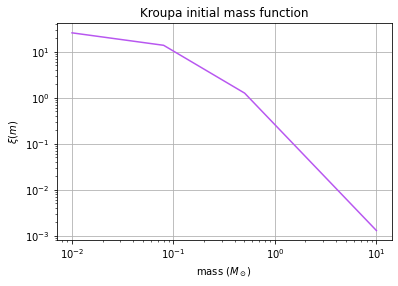 Here I have normalized the IMF such that $\int_{m_0}^{m_1} m \xi(m) dm = 1M_\odot$. You can see that small mass stars are far more common than high mass stars. In particular, we can estimate that in a recently formed star population, the fraction of stars with $m>m_SN=8M_\odot$ will be

Only 1% of the formed stars will become a supernova! Actually the integral shouldn't go up to $+\infty$, because above $40M_\odot$ stars start to directly collapse into a black hole, but those stars are so rare that we can safely ignore their contribution.

Now we have everything we need to estimate the number of supernovae that ever took place in the observable universe.

This result is in good agreement with Rob's one.

Edit: This answer neglects type Ia supernovae. A good start may be this paper https://arxiv.org/pdf/2105.11954.pdf

Not the answer you're looking for? Browse other questions tagged star supernova observable-universe or ask your own question.