How much are the benefits of installing a telescope in orbit?

I know that our atmosphere acts like a protective blanket letting only some light through while blocking others. We send telescopes to orbit to get a clearer view of space objects.

I want to know that how much is this benefit. How clear, detailed and helpful-to-study are the pictures compared to pictures from ground based telescopes?

Space telescopes are expensive. However they have advantages

But the benefits come at a price. A amateur astronomer can build a telescope for money, homemade setups in the 10-100 thousand dollar range and laboratory grade ones cost millions or billions.

The new "Thirty Meter telescope" will cost only $1 Billion.

How much are the benefits of installing a telescope in orbit?

In the past the benefits have been astronomical!

Sorry, I couldn't help it.

...our atmosphere acts like a protective blanket letting only some light through while blocking others...

For visible light astronomy, much of the light above the Earth reaches the ground, but astronomical seeing has limited resolution. Bigger telescopes could collect more light, but they couldn't resolve much better than a 15 cm diameter aperture.

So the 2.4 meter diameter Hubble Space Telescope delivered by far the highest resolution visible light images ever. Putting that telescope in space is one of the single biggest game changers in visible light Astronomy ever, matched only by the invention of the telescope, okay and photographic plates, and digital imaging...

How clear, detailed and helpful-to-study are the pictures compared to pictures from ground based telescopes?

Then speckle interferometry and especially adaptive optics were developed that could mostly overcome the atmospheric effects. But adaptive optics is complicated and expensive and needs computers, calibration and often artificial guide stars to work. Until recently it was only working in the near infrared, though it is pushing into the visible spectrum now.

As @RobJeffries points out the Hubble also covers some ultraviolet wavelengths that are not accessible from Earth's surface due to atmospheric absorption.

There are many other electromagnetic bands for which we must go to space to receive signals. These include UV through X-rays and most gamma rays. The atmosphere is too absorbing to to receive this radiation on the surface.

For the highest energy gamma rays however, astronomers use the Earth's atmosphere to convert the gamma rays to a shower of lower energy photons and particles then use a big array of detectors to record the shower and time the individual particles to reconstruct the direction and energy of the gamma ray.

For charged particle or cosmic ray astronomy (e.g. protons and heavier nuclei) you also must go above the atmosphere to directly measure the particles (low energy) but you can also use the Earth's atmosphere to produce a shower. 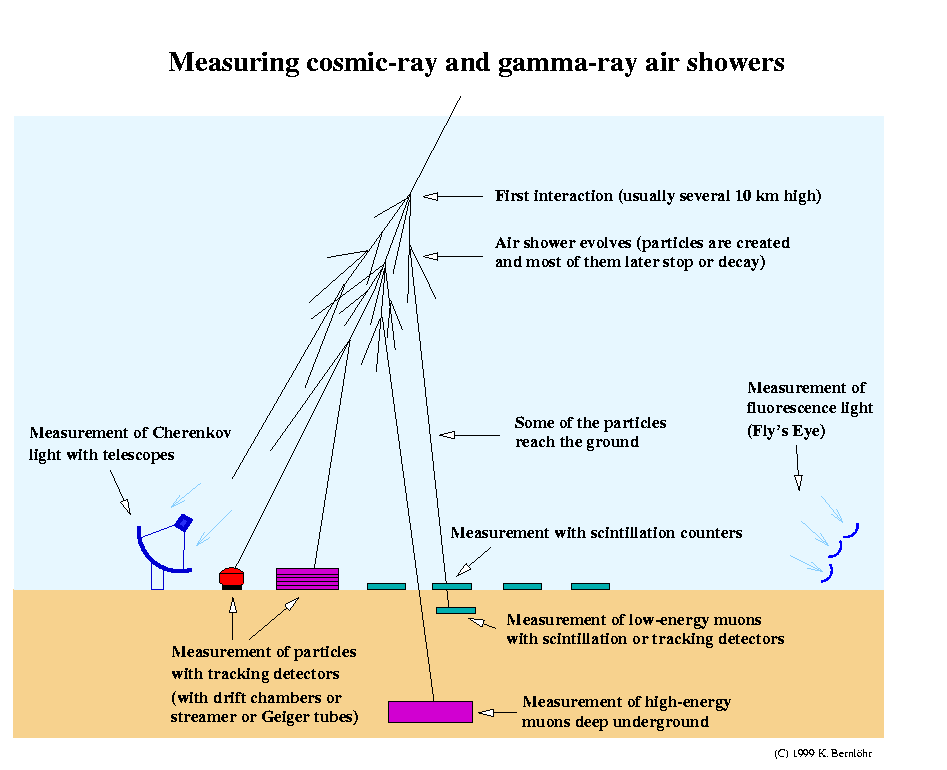 For low energy protons and nuclear cosmic rays, there is the Alpha Magnetic Spectrometer aboard the International Space Station.

At the other end of the electromagnetic spectrum, starting below 20 or 30 MHz the Earth's ionosphere becomes reflective to low frequencies. This is why short wave radio listeners can hear signals from the other side of the Earth. For these lower frequencies radio astronomers must also get above Earth's atmosphere.

Another advantage of going to space is distance!

VLBI or very long baseline interferometry is the use of radio telescopes separated by very large distances to make a synthetic aperture for very high resolution. Currently the most famous case is the Event Horizon Telescope which is "as big as the Earth" and firmly on the ground, but VLBI from space offers even larger baselines.

10
Why aren't ground-based observatories using adaptive optics for visible wavelengths?
6
Requirements to resolve position of Jovian Whistlers up to magnitude of Red Spot with amateur radio equipment?
6
How did VLT's adaptive optics obtain this resolution for Neptune? Is it really working in visible wavelengths?
5
What (if any) capabilities of Hubble are unique and irreplaceable? What can it do that can't be done by any other ground or space-based telescope?
2
What can be learned from low frequency radio astronomy available outside of Earth's ionosphere?
3
Will the E-ELT use Adaptive Optics at visible wavelengths?
3
Current topics on Radio Astronomy and looking for advice
2
Number of actuators in adaptive optics
0
Did the Spectr-R space-based radio telescope use on-board accelerometer to measure non-gravitational acceleration for baseline correction?
0
Why is space-based VLBI scattering sub-structure "Hopefully, a new promising tool to reconstruct the true image of observed background target(s)"?
See more linked questions