At 06:30 in the nice video Sound Waves from the Beginning of Time about the baryon acoustic oscillations (BAO), the speaker says the sound horizon is about $500$ thousand light-years. But, according to the figure to his right, the bump (peak) of the baryon overdensity (mass) indicates that before recombination, the position where the sound reaches is $150$ Mpc, which equals $500$ million light-years rather than $500$ thousand light-years. Was that a slip of the tongue of the speaker? 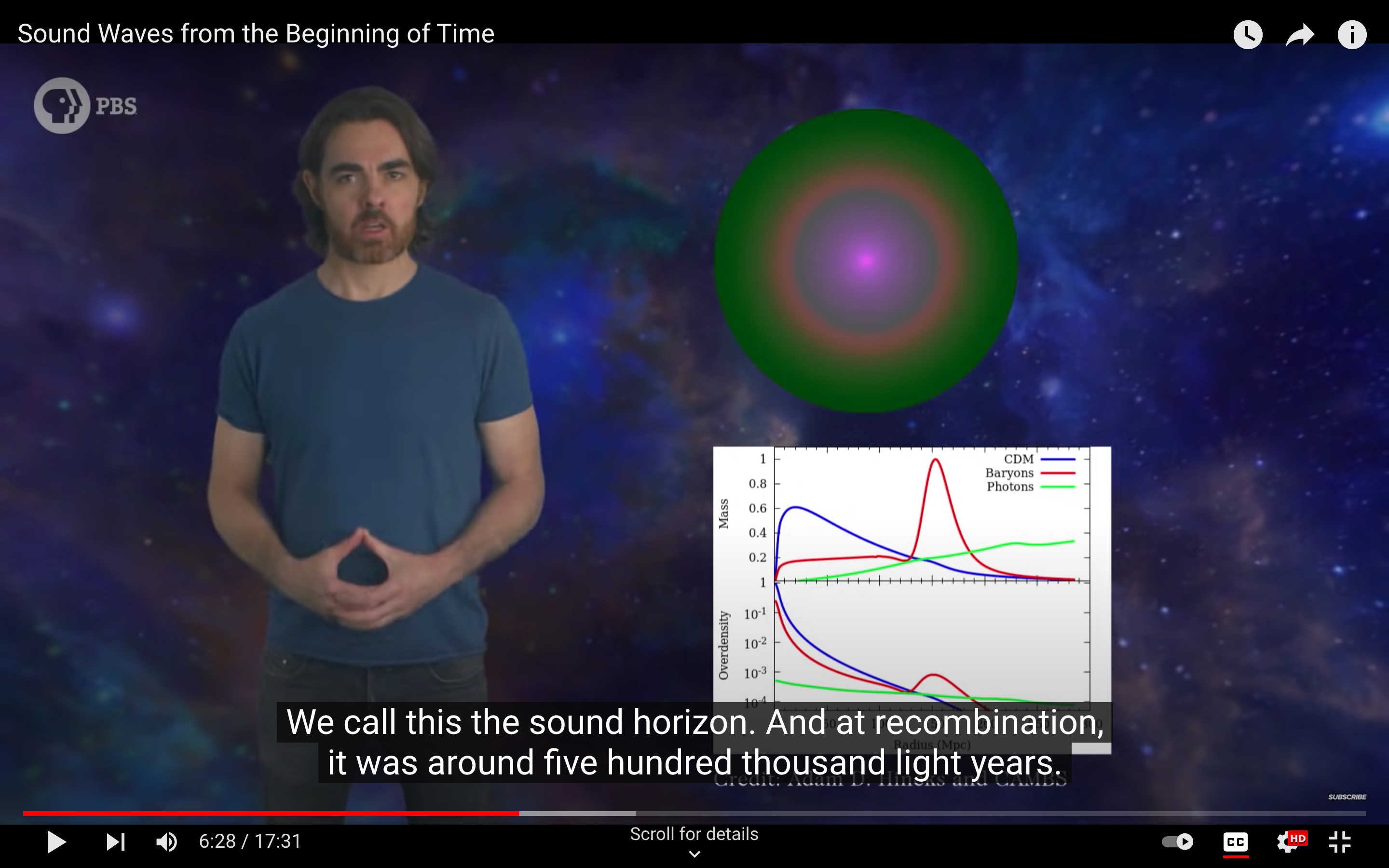 I think you answered your own question in the comments, but I'll answer here to provide a definitive answer.

the speaker says the sound horizon is about 500 thousand light-years.

You're missing out on the crucial part of that phrase which is "At the recombination, it was around five hundred thousand light years". That was more than 13 billions years ago though, and the universe has continued to expand since then.

After that initial shell got frozen in at the period of recombination at a radius of around 500,000 light years (0.15 Mpc), the universe expanded and that shell is now, in the present day, roughly 1000 times larger at 500 million light years (150 Mpc).

This statement is corroborated by sources such as this one from the UCLA which states:

However, this seems to be a disconnect with the diagram in the video which shows a wave traveling out and freezing at 150 Mpc. For reference, the video's source is from Adam Hincks website. A similar visual can be seen on Daniel Eisenstein's website (one of the major players in the field of BAO).

The explanation is that these diagrams are illustrative only and are not making an effort to properly model all the physics involved in generating a BAO and then having that BAO expand due to an expanding universe. Instead, they're merely trying to explain the physics involved. Importantly, they only simulate the creation of the wave and not the subsequent expansion of the wave due to the expansion of the universe. The numbers used and physical setup has been carefully constructed to be as pedagogical as possible.

I do think it is a slight disservice to create a simulation which shows acoustic waves being created with a radius of 150 Mpc simply because that is the size of the wave today. Such an event is not physically possible as the matter would have to be traveling faster than the speed of light in order to reach that size by recombination. Suffice to say, the graphics should not be taken at face value, but merely as instructive tools on the process.

Not the answer you're looking for? Browse other questions tagged astrophysics cosmology cosmic-microwave-background sound .

2
Can matter leave the cosmic horizon?
0
Seeing a galaxy (quasar) greater than 46.6 billion light years away
23
What would happen to a polished marble statue left in space for a million years?
7
What was the length of the solar day 73 million years ago?
3
Where can I find the previous years' International Astronomy Olympiad question papers?
2
What was the size of the universe around 400 million years after the Big Bang?
6
If an object 1 billion light years away emits light, does it take more than 1 billion years to reach us because of the expansion of the universe?
8
Why was the Cosmic Microwave Background (CMB) released at a blackbody temperature of 3000K rather than 30,000K?