Are all the steps below leading this approximation for a zero-shadow latitude correct?

Here we calculate an approximation of the latitude which experiences zero shadow on (at the start of) a given day of a year.

The Earth's axis of rotation is inclined (with respect to its orbit) by about $23.5°$. As the Earth revolves around the sun, the latitude which experiences zero shadow ranges between $23.5°$N and $23.5°$S.

If we assume absence of rotation, it implies that there will be one spot on the Earth at any given time of the year which experiences zero shadow.

For initial conditions: assume that the starting time is the day of Spring equinox (which is roughly on March $20$) and the point experiencing zero shadow at the start of the zeroth day is P. Therefore P lies on the equator. 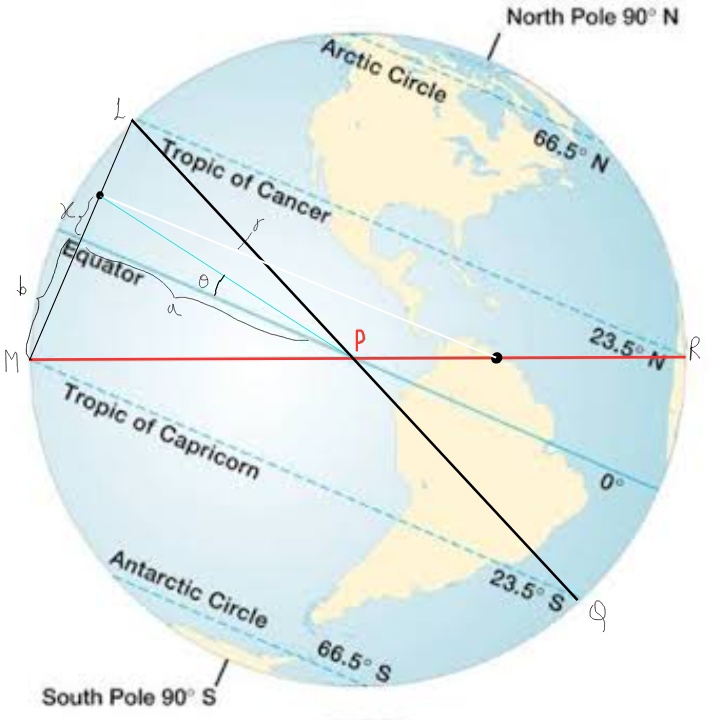 The zero shadow spot moves along its circular path on the Earth (shown in red color in the figure) in uniform circular motion, with period equal to 1 year. It's projection along the diameter MR in the figure is a SHM with frequency $\frac {1}{365.25}$. per day.

The value of x can be used to calculate the angle with the equator, $θ$. This is the required latitude.

The commonly used first approximation for the latitude of the Sun's GP is $23.5 sin(\frac{2d \pi}{365.25})$,where d is the number of days since the vernal equinox. If your sine lookup is for degrees use 360 instead of $2 \pi$ in the formula. South latitudes are negative.

Not the answer you're looking for? Browse other questions tagged equinox earths-orbit or ask your own question.