What is k2, how does it relate to Io's volcanism and how can Juno constrain its value?

This answer to Does Juno's UVS have any chance to spot Europa plumes? links to Juno OPAG REPORT by Scott Bolton, OPAG, September 2020. The slides detail past and future Juno flybys of Jupiter and some of its moons, and last slide (shown below) says:

Question: What is $k_2$, how does it relate to Io's volcanism and how can Juno constrain its value? 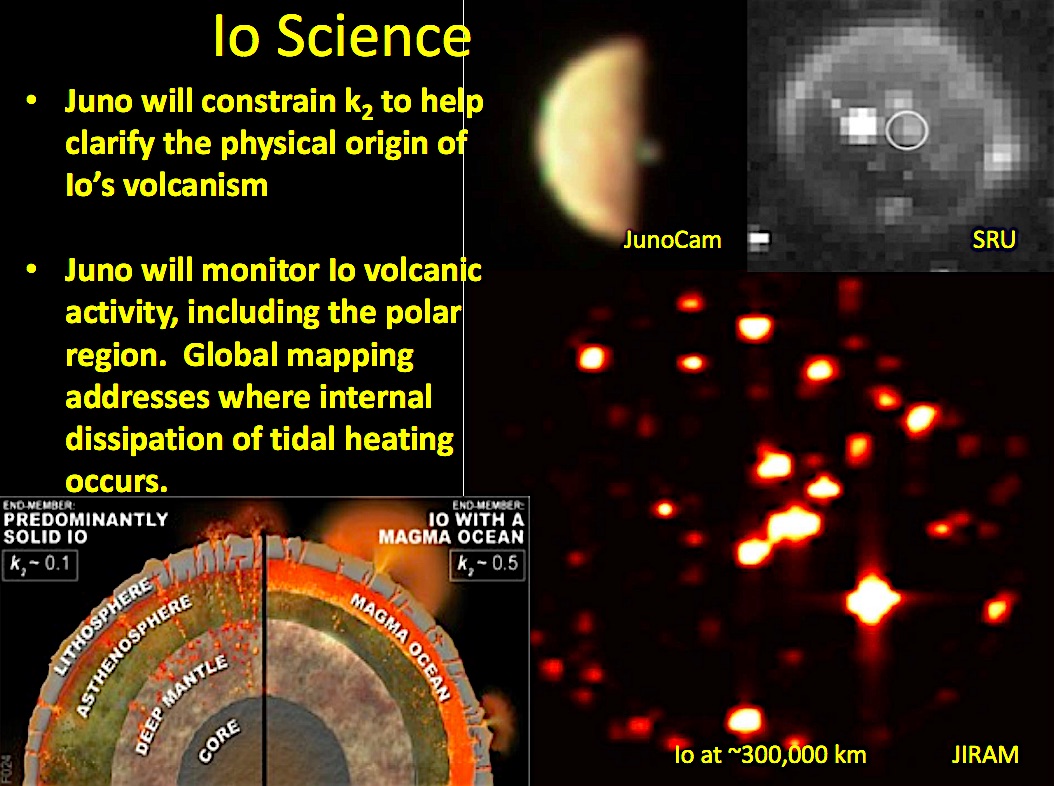 It is called Tidal love number. The definition is as follows:

In Newtonian gravitational theory, a tidal Love number relates the mass multipole moment created by tidal forces on a spherical body to the applied tidal field. The Love number is dimensionless, and it encodes information about the body's internal structure. (Poisson et.al., 2009)

For more information, refer to these papers:

$k_2$ is one of three tidal Love-Shida numbers related to how gravitation of another body (Jupiter in this case) changes a planet-like body's second degree spherical harmonics (Io in this case).

Three Love and Shida numbers exist for each degree of spherical harmonic coefficients. The three Love-Shida numbers for a given degree $n$ are

A.E.H. Love described the Love numbers $k_n$ and $h_n$ in a 1909 paper to aid in describing the Earth's solid body tides. T. Shida added $l_n$ to the mix a bit later (1912). The zeroth order Love numbers are in a sense baked-in to the spherical harmonics model. The second order Love and Shida numbers are the key numbers of interest as the time-varying changes to the second degree spherical harmonic coefficients strongly dominate over higher degree terms.

How does it relate to Io's volcanism?

There are multiple models regarding the details of Io's volcanism. Each of these different models results in different plausible range of $k_2$. Estimated values for $k_2$ based on Juno gravity experiments can thus rule out some of these models. By way of analogy, scientists long thought that the Moon and Mars had completely solid cores. Gravity experiments ruled out those concepts. The Moon and Mars have molten or partially molten cores (solid inner cores and a molten outer cores). The observed $k_2$ values from gravity experiments are inconsistent with the solid core hypothesis for those two bodies but are consistent with the molten / partially molten core hypothesis.

How can Juno constrain its value?

Juno by itself cannot do so. Juno's telecommunication system is outfitted with equipment that enables the Deep Space Network to track Juno's range and range rate with extreme precision. (The range rate measurements are the ridiculously precise.) With multiple close fly-bys of Io, those precise measurements give the Juno gravity science team the data needed to estimate Io's second degree spherical harmonics coefficients, and hence Io's $k_2$ value.

9
What implications does younger volcanism have on the Moon's thermal evolution?
9
Is Io's orbit or rotation affected by its volcanism?
2
How much time does the ISS take to repeat its orbit?
8
How can it be known that Venus does not have plate tectonics?
6
How does Io's atmosphere behave locally near volcanic plumes?
1
What else can we learn from a Foucault pendulum? Have they ever been used to determine anything more than that the Earth rotates on its axis?