Could the Moon placed near the Sun-Earth L1 point remain in a heliocentric 1:1 resonant orbit with Earth? If Earth were at 1 AU, where's the Moon?

This answer to How much mass can be put in an L4 or L5 and it still maintain reasonable stability? has left me with the gedankenexperiment of the Earth in a circular orbit around the Sun, and the Moon placed somewhere near where the Sun-Earth Lagrange point would normally be.

Question: Could the Moon placed near the Sun-Earth L1 point remain in a heliocentric 1:1 resonant orbit with Earth? If Earth were still at 1 AU, what would the Moon-Earth distance be?

Most discussions of Lagrange points use the simplification of the circular restricted three-body problem, where two objects (e.g., the Sun and the Earth) are massive and in fixed circular orbits about the center of mass, and we are interested in the possible motions of a third particle with effectively infinitesimal mass (e.g., a spacecraft or asteroid). This is simple and easy to understand, and is a good approximation for things like satellite orbits, Trojan asteroids in the Sun-Jupiter system, and the like. But the underlying basis of this was actually worked out for the general three-body problem, where all three objects have nonzero mass (and orbits can be elliptical).

The start of this was work by Euler in 1760s, who described a family of "collinear" exact solutions of Newton's equations where all three objects had orbits that kept them perfectly lined up. Here's an example figure, showing an elliptical-orbit solution for the case where $m_1 : m_2 : m_3 = 1 : 2 : 3$

In the 1770s, Lagrange found an additional set of exact solutions, where the three objects are always arranged in a equilateral triangle (the orientation and possibly the size of the triangle changes with time, but the angles between the bodies are always 60$^{\circ}$). Here's an elliptical-orbit example for the same mass ratios as the previous figure 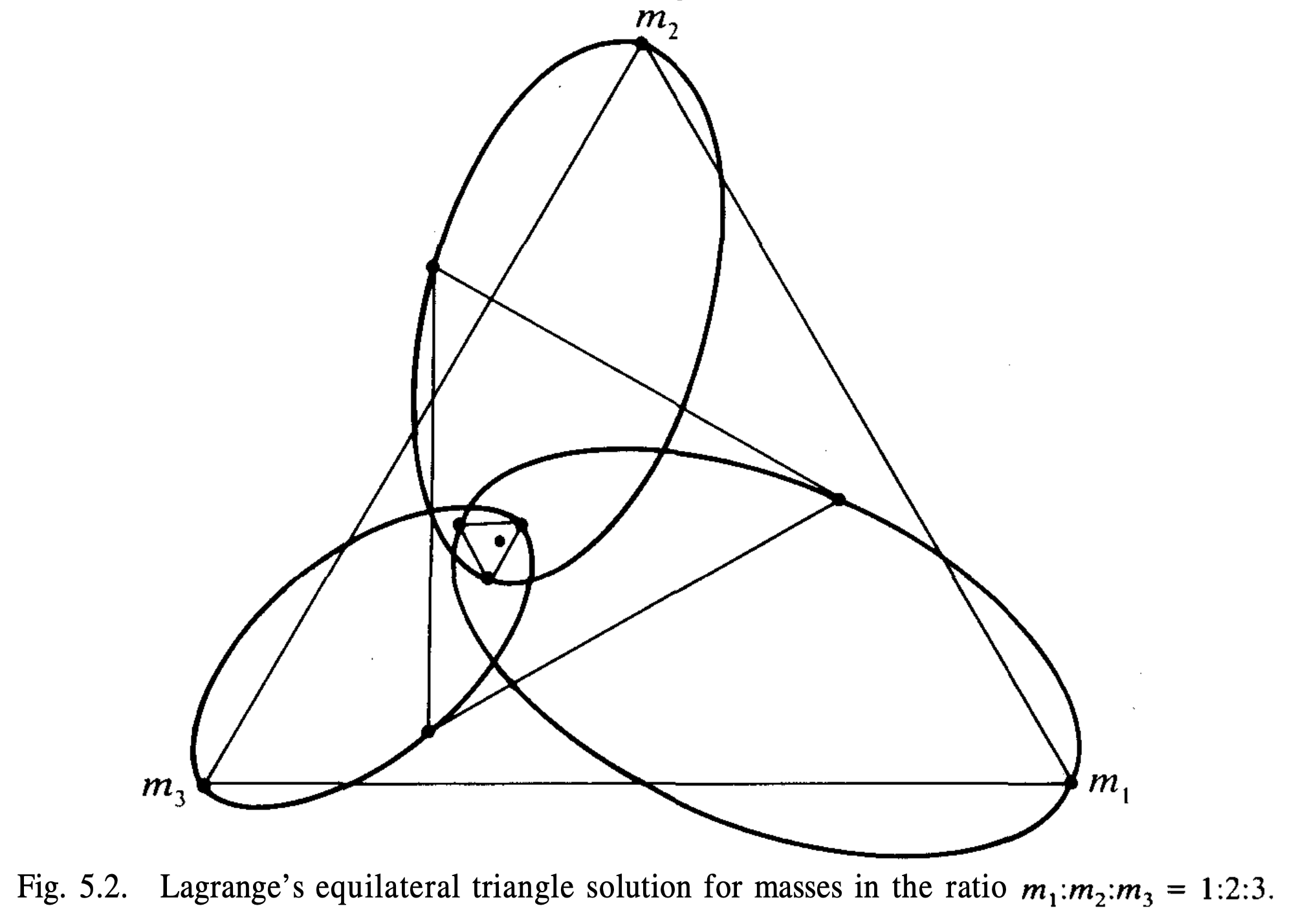 Work in the 19th Century by Liouville (1842), Gascheau (1843) and Routh (1875) demonstrated that Lagange's triangle solution (i.e., the L4 and L5 positions) was stable only if the sum of the masses of the two smaller objects was less than a small fraction of the total mass, and that Euler's collinear solution (corresponding to L1, L2, and L3) was always unstable. (See, e.g., the discussion in the Introduction of Leleu et al. (2018).)

So while it is in principle possible to have the Moon at L1, L2, or L3 -- that is, a collinear arrangement where the Sun, Moon, and Earth are always on a line -- this is always unstable, and so you could never get it to work in practice.

Not the answer you're looking for? Browse other questions tagged orbital-mechanics lagrange-point or ask your own question.

7
Can the Gaia telescope detect small temporarily captured asteroids near its Lagrange orbit?
6
How can Earth-Sun Lagrange points L1 & L2 even be semi stable considering the moon?
21
Would an object shot from earth fall into the sun?
7
Why do particles from a comet that result in meteor showers spread out mostly along the comet's orbit?
3
Small changes to Earth's orbit caused by a large impact on the Moon
1
If a satelite is in orbit around a two body system what is it's shape?
5
Lagrange points for bodies in elliptical orbits?
9
Why don't we find planetoids at L4/L5?