What exactly will happen when the Sun leaves the main sequence? I know it expands to a red giant twice, but what happens exactly? What's the timeline? [duplicate]

Ask Question
Asked 3 months ago
Active 3 months ago
Viewed 114 times
1
$\begingroup$
This question already has an answer here:
How long does it take a star to transition from main sequence to red giant? (1 answer)
Closed 3 months ago.

The community reviewed whether to reopen this question 3 months ago and left it closed:

Needs more focus Update the question so it focuses on one problem only by editing this post.

I've seen numerous claims surrounding this, with some claiming the expansion of the Sun from its end-main sequence radius to its peak red giant radius will take over 1 billion years, while others claim it will happen in two phases (a slow expansion followed by a faster one over the same time frame (I'm not talking about the AGB, this is within the initial RGB)), or a far more rapid expansion, covering 5 million years or less. Furthermore, I have seen some claim that the Sun's maximum radius will be achieved during the RGB, while others claim that it is within the AGB that this will be reached (roughly 256x modern day value, or 1.5AU or so, from what I've heard). It was also always my understanding that the Sun will continuously expand throughout both stages, reaching its peak shortly before collapsing to the red clump or finally destroying itself, for the RGB and AGB respectively. But I have seen some allude that the Sun will reach its peak RGB radius, and then remain relatively static for some time longer, around a billion years, before collapsing to the red clump. From what I can tell, nobody seems to disagree that the AGB is marked by continual expansion with little time spent at a static radius, the peak AGB radius being achieved before the last pulse fully destroys the outer layers of the Sun and begins ejecting them into a planetary nebula. I have also heard conflicting things about the fate of the surviving planets when the Sun finally dies.

What do our latest models, calculations and observations suggest will occur? How fast is the Sun's expansion to a red giant? In which stage of the red giant phase will the maximum radius be achieved, the RGB or the AGB? What will be the rate of luminosity increase and mass loss in both stages? Which planets are likely to be engulfed in which stages; will all three survive until the AGB, is, say, Mercury destined to be destroyed in the RGB but the rest of the inner planets (bar Mars) will survive until the AGB, or will they all survive until the AGB? Will the Sun's radius remain static for any time during the RGB or AGB (I know it stays constant during the red clump)? What will the Sun's radius and luminosity be during the red clump? How long will the AGB last? In which phase will the peak luminosity be achieved, and what is that value, to the best accuracy? When the Sun finally does destroy itself, what will happen to the surviving planets that didn't get engulfed? Will the surviving inner planets (Mars and Earth if in the unlikely event it survives) be destroyed by this event, due to their proximity? Will other orbiting bodies around the Sun be ejected or will they just move further outwards? How likely is it that the four giant planets will be transformed into cthonian planets? I would assume that it's almost guaranteed that the Kuiper Belt, SD and Oort Cloud will be either largely destroyed (in the KB's case considering it will find itself within the red giant Sun's snow line and thus lose its volatiles and gases, which make up a major percentage of its mass) or lost to interstellar space during the red giant phase and final destruction of the Sun?

Lots and lots of questions, I know. I just want to know the latest information we have about the Sun's fate, since the web seems to be polluted with ambiguous and old info.

I've used a research-grade tool to calculate a very simplified and definitely not research-grade run of the evolution of a roughly Sun-like star roughly from birth to its white-dwarf cooling sequence. I don't often run models to the white-dwarf cooling branch so some of my parameter choices are probably poor but, all these caveats aside, it's a basis on which to discuss many of your questions.

Here's a snapshot of the radius from the start to a bit more than the age of the Universe and a zoom in on the stuff around 12 Gyr. 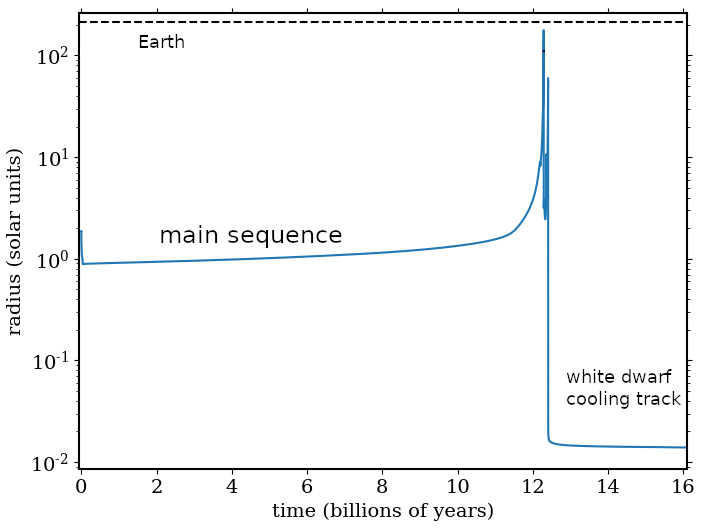 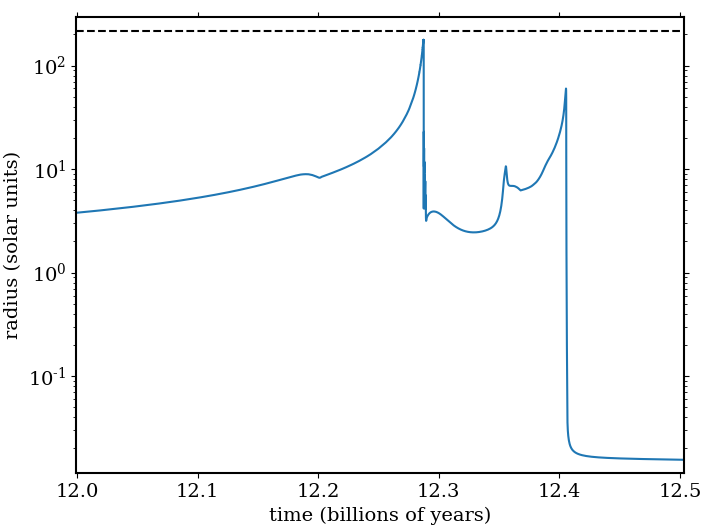 The main things you can see here are that most of the time is spent on the main sequence, followed by a short subgiant phase and the various phases of evolution in the red. The dip around 12.2 Gyr is the "red giant bump", which is a bit complicated to explain. The convective envelope grows inwards in mass during the first part of the red giant branch before receding, which leaves a composition discontinuity. When the hydrogen-burning shell reaches that discontinuity, there's a brief adjustment in the star's structure, which manifests as a contraction. (See Fig. 10.5 in Onno Pols' lecture notes.)

The greatest radius is reached at the tip of the ascent of the first giant branch and is about 185 solar radii (0.86ish AU), not quite as large as the Earth's orbit. The roughly constant radius phase lasting ~0.1 Gyr around 12.3 Gyr is core helium burning, which we'd observe as the red clump.

But this is only a Sun-like model: I used a initial hydrogen mass fraction of 70% and helium mass fraction of 28%, which, though not crazy, aren't quite right. I also haven't calibrated the model to reproduce the Sun's luminosity and radius at the age known from radioisotopes (I'm off by a few per cent). Even so, the models have a free parameter to define the efficiency of convection whose value mainly changes the radius of the model and could reasonably vary somewhat over the star's life. So there's some uncertainty there too.

The biggest uncertainty I expect, though, is in the rate at which the model loses mass through it's wind. I've thrown in some not-insane values that are probably a bit too high. The model started core helium burning with a total mass of only about 0.52 solar masses, whereas those same lecture notes have 0.7 solar masses. The core helium burning is probably not too far off¹ but the evolution after that is questionable. So I won't claim to answer whether or not the model reaches a larger maximum extent on the AGB. If it has a weaker wind than my parameters, I wouldn't be surprised if it's somewhat larger than my model's ~60 solar radii. This may explain why you've seen conflicting numbers.

The final expansion is what we associate with the planetary nebula phase, though my model hasn't gone through any thermal pulses on the AGB, probably because of my aggressive mass loss parameters.

¹ For experts, I say that because the envelope remains large and cool and a normal helium-burning shell appears to start after core helium burning.

3
How long does it take a star to transition from main sequence to red giant?
0
How rapidly does a main-sequence star become a giant star?

3
What will the last days of Earth be like?
13
Fate of Jupiter when our sun dies
8
How fast will the sun grow when it becomes a red giant?
3
What will be the temperature on Earth when Sun finishes its main sequence?
10
If Sunlike stars become a red giant and eventually a white dwarf, what do red dwarfs become?
1
How large will our Sun get during the red giant phase (ie which planets will it engulf) before the helium flash?
3
What would happen to the Sun's evolution if it collided with another yellow dwarf?
4
How much mass is lost in the red giant phase of a sun?