Are the dispersion directions of the prism and the grating in Hubble WFC3 UVIS G280 perpendicular? Can we call this a "grism"? With cross-disparsion?

From Into the UV: A precise transmission spectrum of HAT-P-41b using Hubble's WFC3/UVIS G280 grism:

The UVIS grism, however, comes with several quirks that make it difficult to observe with and challenging to analyze.

Pushback against the idea that the Hubble Space Telescope's Wide Field Camera 3's UVIS G280 has it's refractive dispersion crossed with its diffractive dispersion, and that that would disqualify it from being called a grism (despite evidence to the contrary) under this answer to Why do space telescopes have GRISMS? Why a grating AND a prism for cross-dispersion in slitless spectroscopy? has lead me to examine this instrument even more closely.

The image below from HST/WFC3 in-orbit grism performance (also here) shows slitless spectroscopic images of a star using each of the three WFC3 "grisms".

The top one is from UVIS G280 and differs from the other two in that it is 2D; each grating order curves "up" apparently perpendicularly to the main dispersive direction.

It is this curvature that caught my eye and lead me to post the linked question.

A detail of the first few positive orders, from Hubble Space Telescope User Documentation 9.3.4 Spectroscopy with the WFC3 G280 Grism:

Figure 9.9: Zoomed view of the G280 positive spectral orders. Overlap between the +1st and +2nd orders occurs for wavelengths greater than about 400nm.

Fig. 3.—: UVIS G280 spectrum of WR14. Several orders are labeled. As shown here, the dispersed spectra are highly curved at lower wavelengths (right hand side of panel (b) and overlap at longer wavelengths where they merge.

In visible light glass prism dispersion dramatically increases at lower wavelengths due to the presence of strong absorption in the ultraviolet. It is a consequence of the Kramers–Kronig relations where the absorption in the UV is expressed as a series of poles. This leads to Cauchy's equation as a convenient approximation in the visible, far from the poles in the UV. 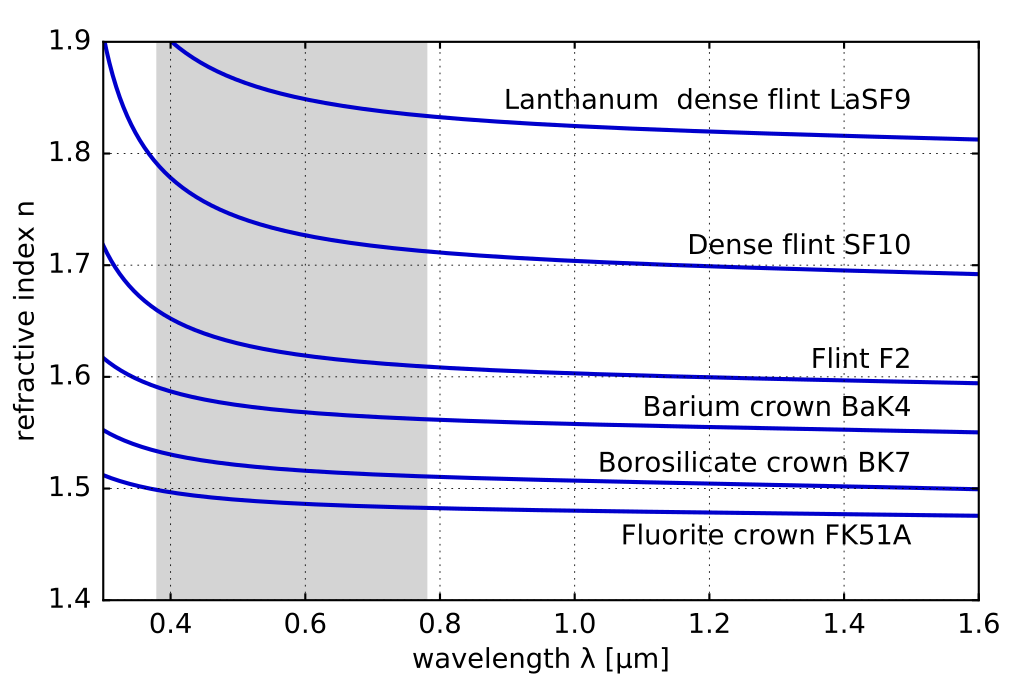 ST-ECF Instrument Science Report WFC3 2009-01; The ground calibrations of the WFC3/UVIS G280 grism includes the following simulation based on a calibration polynomial, fit to measured positions of variably monochromated light, which is highly illuminating! 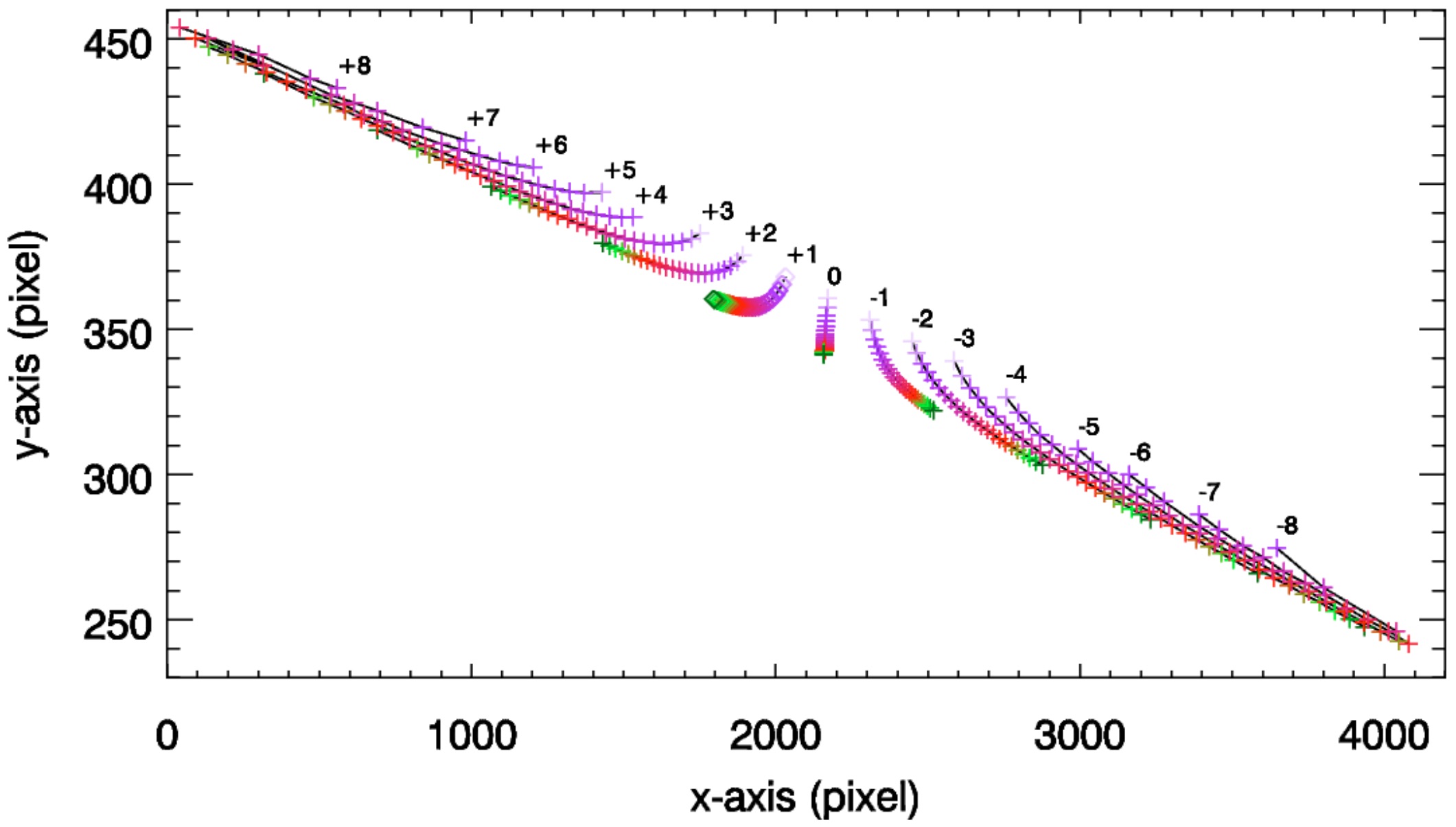 Figure 2: Schematic representation of traces in orders +8 to -8 as derived from monochromator steps obtained during TV2. For each order, colours visualize wavelength from pale purple to green for wavelengths of 200 to 530nm, respectively.

The fundamental design parameters of a grism are the deflection of the incident beam by the grism (defined by the prism angle), dispersion in the various orders and the energy in each order (defined by the groove frequency and profile). In order to extract slitless spectra from grism images it is necessary to know these parameters and their variation with position in the field.

note the compression of the x-axis scale compared to the y-axis in this image, which distorts the angle between the diffractive and refractive dispersions. Here is what a bit of that figure looks like compressed 10:1 vertically to have roughly pixel spacing in both directions:

They look substantially (though not perfectly) perpendicular!

Are the dispersion directions of the prism and the grating in Hubble WFC3 UVIS G280 perpendicular?

Can we call this a "grism"?

Sure. (Everyone who works with it does.)

Perhaps, though it's really not clear if there is meaningful cross-dispersion going on, and if there is, it doesn't serve any useful purpose.

All the discussions, reports, and manuals dealing with the G280 grism call it a "grism", and there is no mention of anything bizarre like the prism and grating directions being perpendicular. If they were, the images produced would be very different from what you see.

The only possible indication for anything odd about this grism, as far as I can tell, is that it was apparently a "spare" for a grism in the original Wide Field Camera (aka WFC1) of HST. Brief references in documents from the 1980s indicate that the "G200" grism of WFC1 was actually a (normal) grism butted against a prism oriented in a perpendicular direction. This was intended to produce crossed-dispersed spectra with the first two grating orders separated and usable for spectroscopy, as indicated by this figure from the Wide Field - Planetary Camera Instrument Handbook (1992): 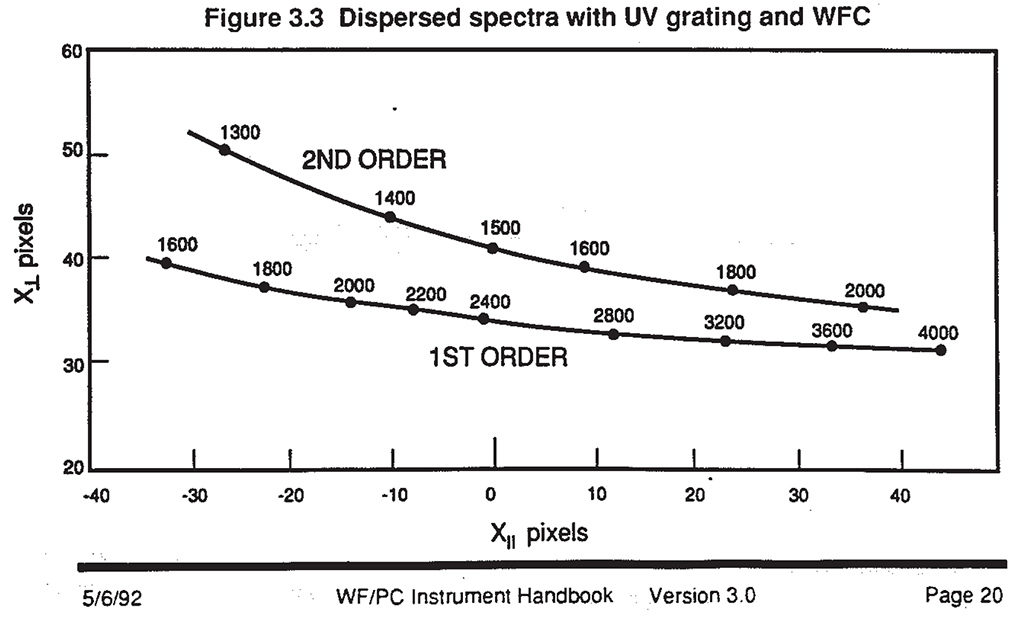 Note that unlike G280 grism images shown in your question, the 1st and 2nd order spectra are clearly separated over their whole lengths. (Due to the mirror defect, this grism was apparently never used for any observations.)

This seems to be similar to the design of the GR700XD grism for the James Webb Space Telescope, which consists of a normal grism (with grating and prism dispersions in the same plane) mounted next to another prism with a perpendicular orientation: 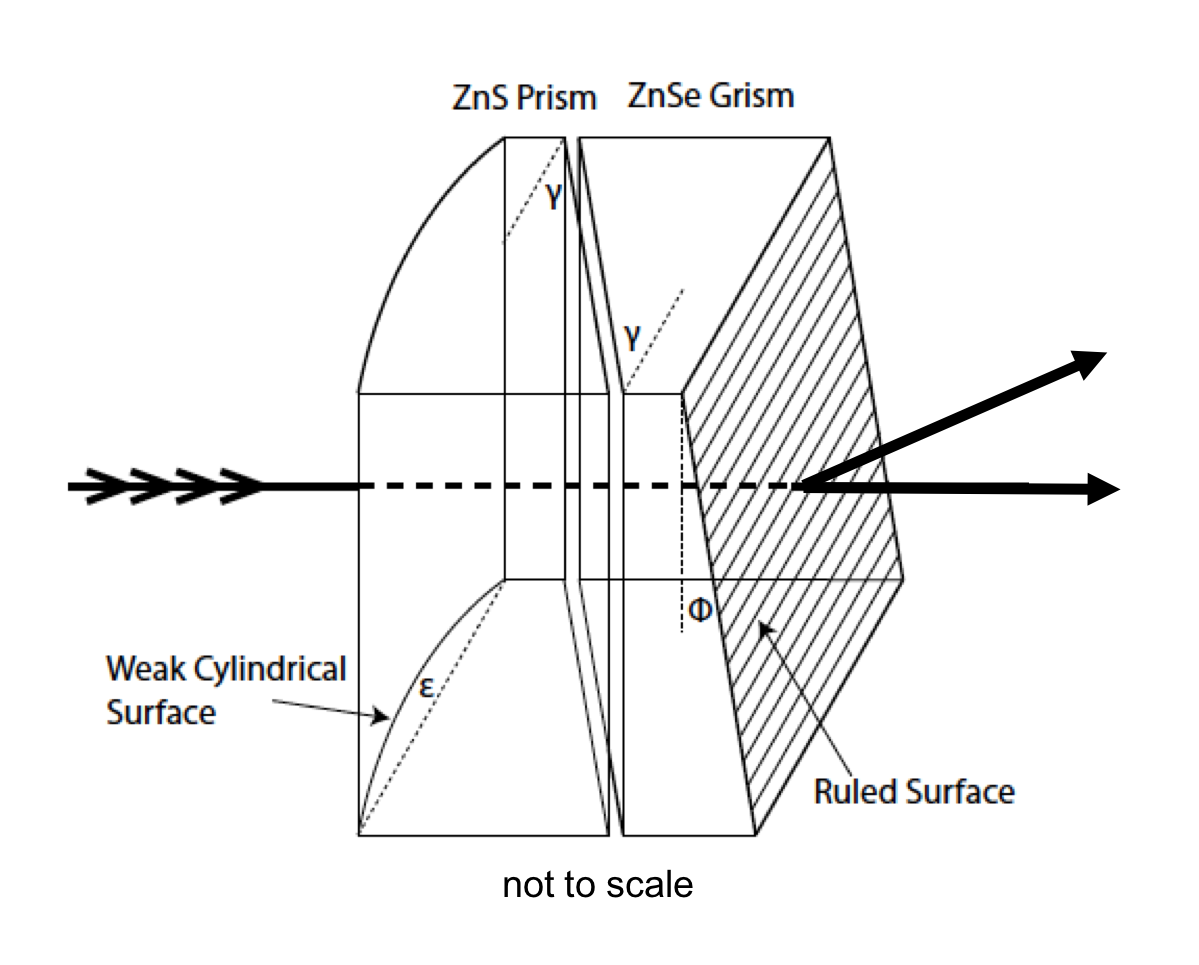 This is intended to separate the first three spectral orders of the grating, as shown in this image

Note that -- again -- unlike G280 grism images, the 1st, 2nd, and 3rd order spectra are clearly separated over their whole lengths (though not by very much).

I can see two possibilities for the WFC3 G280 grism:

Finally, I will point to this paper (Yang & Wang 2018), which describes a grism design matching your supposition: a grating with its dispersion direction perpendicular to the prism's dispersion direction. This is not a description of an actual instrument; it is a purely hypothetical analysis ("What if we installed the grating perpendicular to the prism? We ran some optical simulations for this scenario."). There are two things to note here: 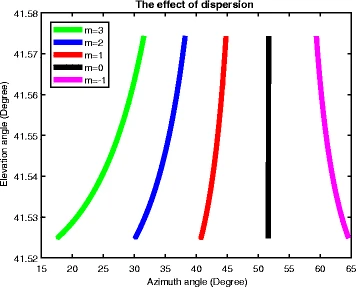 So let's look at a couple of things that seem to be confusing you:

Curvature of a spectrum from a grating is almost always present, although in well-behaved systems it can be very small (as in the WFC3 near-IR grisms). That's why there is always a step in the reduction of spectroscopy where one "traces" the spectrum from a given order, so that one can extract the full spectrum properly. The curvature in the first and higher-order spectra produced by G280 is rather extreme -- possibly indicating design or manufacturing flaws in the grism, or design compromises for working in the UV -- but it almost certainly has nothing to do with "cross-dispersion".

There is this comment in ST-ECF Instrument Science Report WFC3-2005-17:

... the offset in the y-direction (relative to the common trace definition) seen at short wavelengths appears to be similar for all orders when expressed in pixel units, suggesting a slight dispersion in the y-direction by the G280L grating.

They seem to be suggesting that the grating itself may have some unexpected dispersion in the y-direction, in addition to its (expected and obvious) dispersion in the x-direction. Again, we may be dealing with defects in the grism itself.

No, the prism angle is always just the angle between opposite faces of the prism (i.e., the face where the light enters the prism and the face where it exits). In a classic triangular prism, the angle is 60 degrees; in a "right-angle prism", it is 90 degrees. No one uses the term in the second sense you suggest.

Not the answer you're looking for? Browse other questions tagged observational-astronomy spectroscopy terminology hubble-telescope instruments or ask your own question.

0
What is Hubbles WFC3 "UVIS 47 G200" filter? What is it used for? How to find an example?
1
Why do space telescopes have GRISMS? Why a grating AND a prism for cross-dispersion in slitless spectroscopy?

8
What is a radio "homology telescope" and is the 500m dish in China one?
6
What forces expelled these huge clouds, then blocked further progress, yet allowed it to maintain its threads?
4
What is a pupil slicer, and how does it work with anamorphic optics in VLT's ESPRESSO Echelle spectrograph?
3
How does a cross dispersed spectrum look like in a reality (from echelle spectrographs)?
34
Can Pluto be seen with the naked eye from Neptune when Pluto and Neptune are closest?
1
Why do space telescopes have GRISMS? Why a grating AND a prism for cross-dispersion in slitless spectroscopy?
0
What is Hubbles WFC3 "UVIS 47 G200" filter? What is it used for? How to find an example?