Could Planet X have a perihelion much closer than 300 AU and still be responsible for the gravitational interaction with 19 TNOs?

In August, Michael Brown and Konstantin Batigyn proposed new data concerning the hypothetical Planet X to explain the orbits of the 19 TNOs. They suggest a perihelion of 300 AU, but might Planet X be even much closer? Is there something like a minimum perihelion it must have to account for the TNOs' highly elliptical orbits?

The quoted error bars represent their estimate of the 16th to 84th percentiles of a probability distribution, so conceivably the perihelion could even be a little lower. One or two of their simulations suggest a perihelion as low as 200 au, but they are less favoured than those with a larger perihelion distance.

This picture from Batygin et al. (2019) is quite helpful. It shows the parameter space for any new planet that is ruled out by other current observations (e.g. infrared surveys by WISE, the limits on perturbations of giant planets ["ruled out by ephemeris"]). The hatched region shows what might still be possible and does admit the possibility of a small planet between 100 and 200 au, but I would think thathas been superseded by Brown & Batygin's recent work. 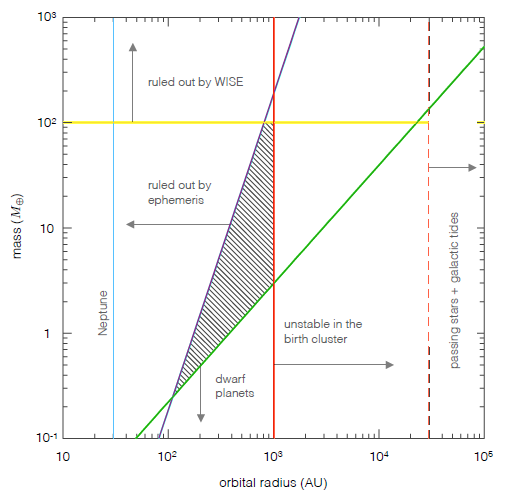 Not the answer you're looking for? Browse other questions tagged orbital-elements trans-neptunian-object hypothetical or ask your own question.