If an object with mass were to somehow go the speed of light, would it destroy the whole universe? [closed]

My premise behind it possibly destroying the whole universe is that an object with infinite energy should also have infinite mass ($e=mc^2$, and infinity / $c^2$ is still infinity). Infinite mass should have infinite gravity, which may well destroy the entire universe (although, would this destruction travel at the speed of light, so it would "slowly" destroy the universe vs. instantly?).

One thought is that it could just form a black hole instead, but as I understand it, a black hole is an infinitely small (singularity) of infinite density, with a "net mass" equal to the net mass that it has ingested.

Would an object with mass traveling the speed of light destroy the whole universe because it would have infinite energy / mass?

If we understand the question as a limiting process, which is the only way it makes any sense, the answer is no. For illustrative simplicity, take a spherically symmetric isolated body, so that its exterior gravitational field is the Schwarzschild spacetime. Now boost this to ultrarelativistic speeds. In the speed of light limit, the result is a linearly polarized axisymmetric gravitational pp-wave, the Aichelburg-Sexl ultraboost.

Its effect on test particles it passes is an impulse: it instantaneously bends the worldlines, but does not destroy anything. You can think of this as infinite force acting for an infinitesimally small time, making the overall effect finite and nondestructive, somewhat analogously to a particle encountering a Dirac-delta potential in Newtonian physics.

This is similar to the ultrarelativistic limit of a moving electric charge. The electric field lines are Lorentz-contracted along the direction of travel, squeezing them together (image credit: wikipedia): 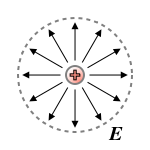 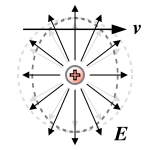 In the ultrarelativistic limit, the electric field in the transeverse direction becomes infinitely strong, but it is also Lorentz-contracted to be infinitely thin. Without ignoring the magnetic field, the result is an electromagnetic plane wave with a Dirac delta profile. The gravitational case is analogous, though quantitatively different. Some details on this can be found in arXiv:gr-qc/0110032.

My premise behind it possibly destroying the whole universe is that an object with infinite energy should also have infinite mass (E=mc^2, and infinity / c^2 is still infinity).

The concept of 'relativistic mass' is largely deprecated in modern physics. Mass is more properly related to energy and momentum via $(mc^2)^2 = E^2 - (pc)^2$.

One thought is that it could just form a black hole instead, ...

Not the answer you're looking for? Browse other questions tagged universe light speed mass special-relativity or ask your own question.

11
How does light affect the universe?
2
Meaningful theories of the shape of the universe
15
Could light be dark matter?
4
What type of energy is escaping from black-hole's poles?
0
If the Universe is infinite, would heat death be impossible?
1
Black hole darkness a result of gravity or temporal distortion?
3
Light beam (1 photon) in the limited universe?
3
How much time passes in the outside universe when falling into a black hole?