How do bars form in barred spiral galaxies?

I am aware this duplicate question exists, but its only answer is unfortunately a rather unsatisfying quote which I could not even find within the provided link. Also, that question is from 2017 so there might be more up-to-date information.

For completeness, this is the quote in that link:

"Galactic bars develop when stellar orbits in a spiral galaxy become unstable and deviate from a circular path. The tiny elongations in the stars’ orbits grow and get locked into place, forming a bar. The bar becomes even more pronounced as it collects more and more stars in elliptical orbits. Eventually, a high fraction of the stars in the galaxy’s inner region join the bar. This process has been demonstrated repeatedly with computer-based simulations."

which raises many questions. Do stellar orbits really start out in a circular path? Why do they undergo those elongations, and why do the disturbances get locked into place forming a bar structure?

It seems strange to me that a galaxy, which I imagine as a structure with some level of cylindrical symmetry, goes on to develop an elongated bar structure in its central region.

The general idea is that galaxies with thin, kinematically "cold" (= stars or gas clouds in close-to-circular orbits) disks are generically unstable to non-axisymmetric instabilities, which can give rise to both spiral arms and bars. (If you think about it, having spiral arms is just as much a violation of "cylindrical symmetry" as having a bar.) Such instabilities can be provoked by an interaction with another galaxy, but they can also be triggered by local density variations (galaxies are never perfectly symmetric).

We still don't really know. The strongest correlation seems to be with total stellar mass of the galaxy: galaxies with stellar masses of $\sim 5 \times 10^{9} M_{\odot}$ are most likely to have bars, with both higher and lower mass galaxies less likely to have bars. I will immodestly illustrate this with a figure from my 2018 paper on the fraction of bars in spiral galaxies: 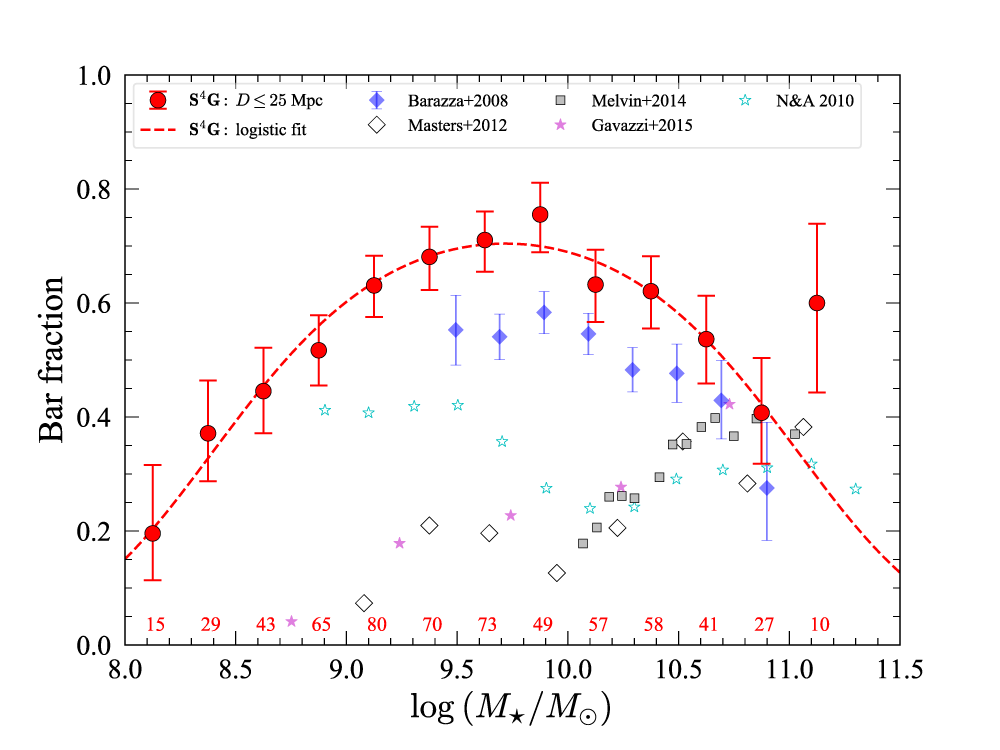 [Taken from Figure 5 of Erwin 2018. The key things to note are the large red circles and the accompanying dashed red curve, which trace the fraction of local spiral galaxies with bars, as detected in the infrared, as a function of the base-10 logarithm of the galaxies' total stellar masses. See the paper for more details and data sources.]

The idea that bars might be transient has been around for a while. Although there have been some simulations (Bournaud et al. 2002, 2005) which suggested that bars could dissipate easily -- and even reform later -- these results have generally not been replicated in other simulations, and the current evidence from simulations and observations generally suggests that bars are pretty durable and long-lived. For example, this paper by Gadotti et al. (2015) looks at the stellar populations in the interior of a bar in the S0 galaxy NGC 4371 in the Virgo Cluster, and argues that the bar has been around in this galaxy for the past 10 billion years or so.

I can suggest reading this paper. A study that use N-body simulations to understand the formation, destruction and re-formation of bar in spiral galaxies F. Bournaud et al (2002)

It's a long paper, but from what I remember the formation and maintenance of spiral structure (in most disk galaxies) means that the galaxy accretes enough gas from its surrounding (also known as the Intergalactic Medium, i.e.: the gas that falls into the potential well of the galaxy) so to continue establishing disk instability.

Apparently, if the inflow is high enough this create high enough instability so to form a bar under the influence of its rotation and torques. However, if the stellar component in the region of the bar becomes hot enough it can then dissipate the bar. This leaves space for more gas accretion that eventually creates more instability and so form a second bar. So, the study highlight how a galaxy can have several episodes of bar-formation (with shorter and shorter lifetime) due to gas accretion.

I strongly suggest reading the entire article, as I remember it was very well explained (even if a bit long), and take my answer as a condensed (but definitely incomplete) summarisation.

Not the answer you're looking for? Browse other questions tagged galaxy galactic-dynamics formation .

4
How is the bar formed in a Barred-Spiral galaxy?

22
How do we know Milky Way is a 'barred' spiral galaxy?
19
Questions about spiral galaxy arms
1
Could discoid galaxies be expanding?
4
How is the bar formed in a Barred-Spiral galaxy?
4
Are magnetic field lines Spiral for Spiral Galaxies? If no, then how it look like topologically?
12
Why do we see galaxies with their actual spiral shapes?
2
How do disk-shaped galaxies then form at the sites of spherical galactic halos? Do the halo stars start orbiting or just sit in place?
12
Why aren't there blue elliptical galaxies or yellow spiral galaxies?
1
Fate of lone spiral galaxies?