Is there any planet bigger than a star?

Or a star smaller than a planet?

Which star and planet would be an example of this?

The answer depends on whether you mean is any planet bigger than any star, or whether the planet and star have to be in the same system and have been discovered/measured, rather than just that they could exist in principle.

There are a few known planets with measured radii that are bigger than the lowest mass stars. Here is a plot from Chabrier et al. (2008) (and plenty more data will have been added since), which shows the basic picture. This is the mass-radius plot for both stars and exoplanets. 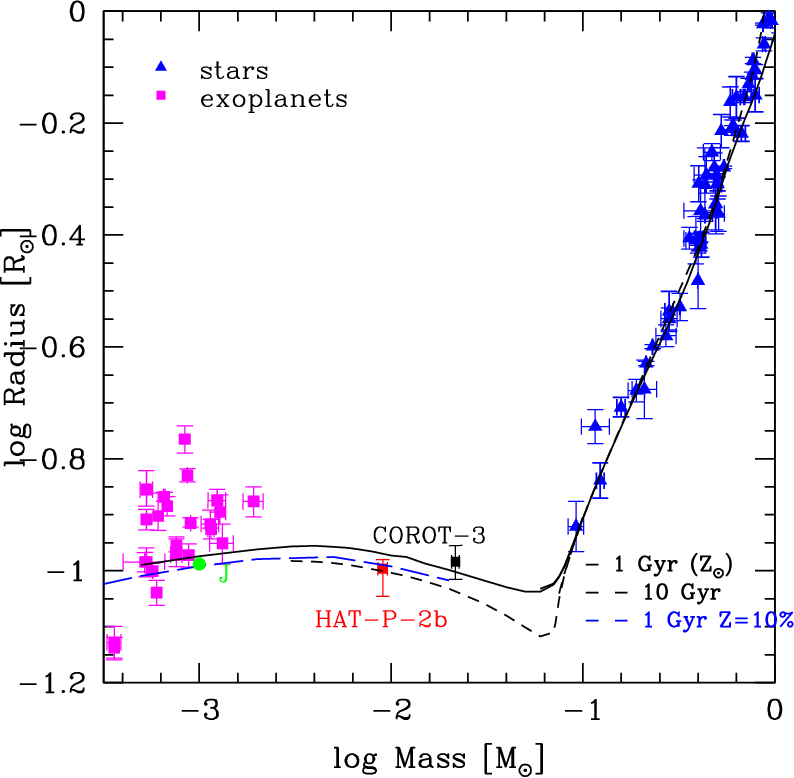 It turns out that there are some hot Jupiters that have radii about twice that of Jupiter in our Solar System. You can find examples at exoplanets.org, such as HAT P-67b and XO-6b. These planets are bigger than theory suggests for a "cold" exoplanet, probably because of "insolation" (heating by their parent star) - e.g. Enoch et al. (2012).

On the other hand, the smallest stars, those just above the brown dwarf limit of $\sim 0.075M_\odot$, that are predicted to have radii (at least once they are a billion years old and have reached the main sequence), of about 1.3 times that of Jupiter. At older ages they can become even smaller - about the size of Saturn (black dashed line).

In terms of measurements, there are low-mass objects in eclipsing binaries and also a handful of very low-mass stars that have interferometric radii. For example Proxima Cen (the nearest star to the Sun) is reported to have an interferometric radius of $(0.145 \pm 0.011)R_\odot$ (or 1.44 Jupiter radii) by Demory et al. (2009) and so this is clearly smaller than the biggest exoplanets.

If one demands that the exoplanet and star are part of the same system, then although they could exist in principle (as per the discussion above), there aren't any examples (yet). The curves in the plot above are not dependent on the type of star a planet orbits. Therefore, in principle, it might be possible for a $>1M_J$ planet to be found orbiting a (only just) smaller $<0.1 M_\odot$ star, even if it receives negligible insolation.

In practice, giant exoplanets are rare around low mass stars, so it could be some time before an example is found. However, a close candidate might be GJ3512b which is an exoplanet with $M\sin i = 0.46 M_{\rm Jup}$ (i.e. this is a minimum mass, since the orbital inclination $i<90^{\circ}$) that orbits an M5.5V star quite similar to Proxima Cen (Morales et al. 2019). The star has an estimated radius of $(0.139 \pm 0.005) R_\odot$ and the age is thought to be a few billion years. Looking at the curves in the plot then a cold exoplanet with $i \sim 30^{\circ}$ might be comparable in size to the star. Unfortunately, the exoplanet doesn't transit so no radius measurement is available and it is unlikely to be inflated by stellar insolation because it is in a relatively wide orbit around a faint star

An interesting suggestion is that a young exoplanet might offer the best chance of being bigger than its host star. This is because the contraction timescale of a giant planet is longer than the pre main sequence contraction timescale of its star. The curves in the plot above for 1 Gyr and 10 Gyr show this effect, but it is even more extreme for ages $0.1$ Gyr. Thus the best chance of finding planets bigger than their host stars is to look at young systems in star forming regions. Some of these may already have been found using direct imaging, though in my opinion these quite high-mass "exoplanets" ($>5$ Jupiter masses) orbiting at very large distances ($>100$ au) are more like binary brown dwarfs.

If by "bigger" you are referring to mass, disregarding radius, then the answer is strictly no for a regular "star"

There is an exception: if you are willing to accept stellar remnants like white dwarfs and neutron stars as "stars" (they are hot but there is no fusion occurring) then these can be smaller (in diameter) but much more massive (weight) than a planet.

A white dwarf would be about the size of a moon or small planet, but a mass of about 200-1300 times the mass of Jupiter. Neutron stars are even more extreme, with a size comparable to an asteroid, but a mass of several thousand Jupiters.

Just from theoretical principles, suppose there is some mass $M_s$ above which a body undergoes gravitational collapse and becomes a star, and below which it doesn't. A body with mass $M_s+\epsilon$ would become a star, begin fusion, then radiate energy, becoming a body with mass less than $M_s$. However, it would continue being a star; once a body has undergone gravitational collapse, its density increases, and the mass needed to sustain gravitational collapse is lower. There would need to be a certain amount of energy radiated away before the body ceases being able to sustain fusion. So we should expect there to be a range from $M_s$ to whatever this lower mass is in which there exist both planets and stars.

On top of this, having a sharp boundary of $M_s$ would depend on all star candidates of the same mass being the same in terms of density, composition, temperature, etc. Variations in such characteristics would be another factor creating a "star or planet" band of mass.

Not the answer you're looking for? Browse other questions tagged star exoplanet size or ask your own question.

9
Is there any planet/star bigger than VY Canis Majoris?
10
Is there any way a planet could form independent of a star?
4
Can a star orbit around multiple planets or a planet with massive moons?
5
How can a gas planet become tidally locked with a star?
5
A "tidally locked" double planet?
4
How do astronomers know if a planet is orbiting a star, or it's simply another star in the background?
3
Is there a possibility of finding a system where a star is orbiting a planet?
4
Any known Triple Star Systems with this hierarchy?
6
Can a habitable planet be smaller than 0.58 Earth radii?