I’m hoping to find a method (probably some modeling software?) that would allow me to find pairs of locations on the Earth’s surface that occupy the same point in space relative to the sun, one second apart in time.

It would be best if this method is searchable by choosing a location and seeing at what times it would cross paths with another location one second later (with the sun as the frame of reference).

Any advice is greatly appreciated!

The Earth's orbital speed around the Sun is about 30 km/s. So we can calculate the intersection of two spheres offset by 30 km. Suppose we put the first sphere at the origin [0,0,0], and the second sphere at [30,0,0]. That is, the x-axis is aligned with the orbital velocity vector. 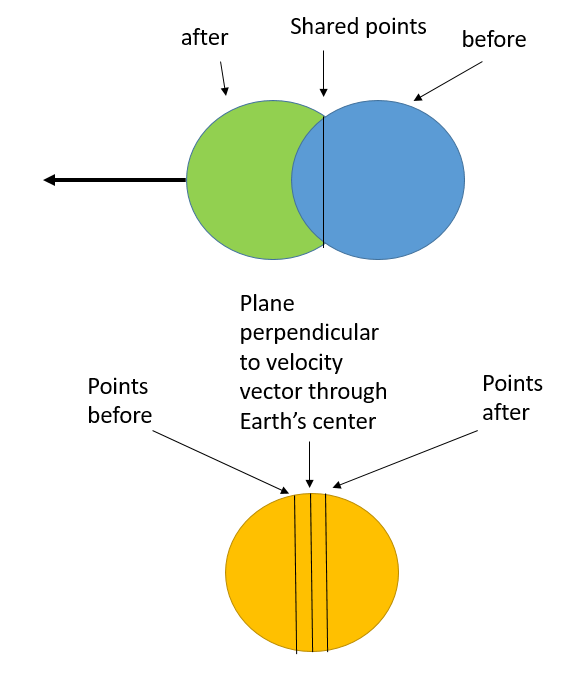 Do you want to account for the revolution of the Earth during that time (a point on the equator moves about .46 km in a second)? Then apply a rotation prior to calculating the latter set of points using a rotation matrix from axis and angle where your angle is $2\pi/86,400$ radians, and your axis is a unit vector specifying the orientation of the Earth's rotational axis from a Sun-centered coordinate system. At summer solstice, this is about $[0,-\sin(23.5),\cos(23.5)]$.

In the following assumptions:

your task is to find the intersection of two spheres, which should be a circle if exists. The first sphere is the Earth now. The second one is the Earth 1 sec later. The difference between these two spheres comes from the orbital motion and from rotation. Due to the Earth's rotational axis inclination to the orbital plane, you also have to keep in mind the day of the year (a 3D angle between the axis and the velocity changes).

In the next step, you may use any realistic model of the Earth's surface and orbit. Anyway, it will be only about finding intersections of 3D shapes.
This way you can get all the points on Earth that have their counterparts as you stated them.

Not the answer you're looking for? Browse other questions tagged the-sun solar-system earth modeling or ask your own question.

1
the length of second, minute or hour, what defines the time of exo planetary bodies
2
Asteroids in langrangian Points 4 & 5
4
Is there a prediction when our solar system would fall apart?
3
Why is sun's photosphere a million times less dense than air at the surface of the Earth?
2
Direction of Earth’s poles relative to the Sun’s movement around the Galaxy
2
How are cardinal points on horizon defined?
17
Official degrees of earth’s rotation per day
3
Are Sun-Earth L1 & L2 points generally considered outside the Earth's Hill Sphere?
4
How to derive gravitational-wave frequency vs time from strain vs time