Have interference effects (in space) ever been observed by a single instrument, as opposed to interferometry?

Interferometry can be done with multiple instruments who's light paths or signals are combined interferometrically, or even between different parts of a single aperture, e.g.

For example comment under Is Diffraction of light observed in gravitational lensing/microlensing? links to Studying wave optics in the light curves of exoplanet microlensing At the longer wavelengths observed via radio telescopes, the authors propose that interference fringes (in time) between a lensed and un-lensed path for light from a given object can be observed at Earth, thereby increasing the amount of detailed information that can be modeled in order to better characterize the lensing event.

That's an example what I would consider as "interference effects (in space)... observed by a single instrument, as opposed to interferometry".

Question: Have any such effects been observed?

When a star is occulted by a "sharp edge" such as the limb of the Moon or by an asteroid, then diffraction effects are seen.

If we are using the Moon as an example, a typical fringe spacing would be about 15m. But of course, the fringes track rapidly across the Earth's surface as the Moon moves in its orbit in front of the source (in much the same way that a solar eclipse tracks rapidly across the surface of the Earth). Thus to observe the phenomenon you need to use a narrow bandwidth filter (different wavelengths have different fringe spacing) and a very fast frame rate camera ($\sim 100+$ Hz). These restrictions mean you also need a bright star to be occulted (rare), or a big telescope.

In principle such measurements, if done carefully enough, reveal the angular structure of the stellar source, including angular diameters and angular separations of binary components or exploring limb darkening. Some random older examples where this has been observed and done include Ridgway et al. 1980; Fekel et al. 1980 (nice example of a binary). The technique is still being used and improved upon in the present day - the image below is the light curve caused by the tracking of the diffraction pattern across a detector during the lunar occultation of $\mu$ Psc (from Zampieri et al. 2019. The upper curve shows the data points modelled with a point source. The lower curve is the same points modelled with a disk source - a better fit, giving an angular diameter of $3.14 \pm 0.05$ milli-arcsec. 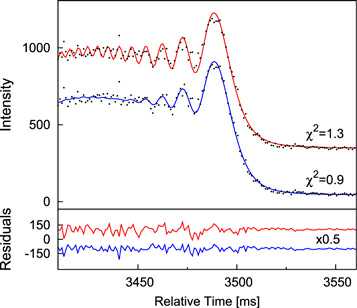 Not the answer you're looking for? Browse other questions tagged observational-astronomy interferometry .

12
How do we know that objects that appear in duplicate or triplicate, etc. due to strong gravitational lensing aren't actually multiple objects?
10
How can I hear (or at least detect) a pulsar at home?
3
What equipment and techniques were used to study Betelgeuse's diameter in 1920?
4
How did Michelson measure the diameters of jupiter's moons using optical interferometry?
3
Is Diffraction of light observed in gravitational lensing/microlensing?
1
Why does the Simbad page "A.A. Michelson's Jovian Galilean-satellite interferometer" show data for Betelgeuse?

17
Has Hawking Radiation Ever Been Observed?
18
Have we ever observed a body, such as a large asteroid, "hitting" the Sun?
17
Is Optical VLBI theoretically feasible? If not why not?
1
Why does the Simbad page "A.A. Michelson's Jovian Galilean-satellite interferometer" show data for Betelgeuse?
3
Has a gravitational microlensing event ever been predicted? If so, has it been observed?
0
What else can we learn from a Foucault pendulum? Have they ever been used to determine anything more than that the Earth rotates on its axis?