Is there any difference between tidal locking and synchronous rotation?

I'm trying to understand more about orbital mechanics, and I'm encountering a few terms which I'm not sure if they are exactly the same. The two terms are Tidal Locking and Synchronous Rotation. To my understanding, Tidal Locking is when the period of one body orbiting another is matching the period of the body rotating around its own axis (like the earth and the moon), however, I'm not sure if Synchronous Rotation means the exact same thing.

Synchronous rotation is when the orbit of a body has the same period as its spin. If the inclination and obliquity are the same, then the same face of the body will always point towards the barycenter. Here is an animation of Pluto and Charon Credit: Stephanie Hoover Wikimedi commons.

Tidal forces impart torque to orbiting body rotations. An orbiting body is in tidal lock if this torque lies in a local minimum, keeping the existing spin rate stable. That is, the tidal torque opposes both increasing and decreasing spin rates, and other rotational torques aren't large enough to break into another spin/orbit configuration ratio.

Usually, tidal lock occurs in synchronous rotation, like our Earth and Moon (almost), or Pluto and Charon. However, Mercury's rotation/spin ratio is tidally locked and stable at 3:2.

Also, other forces than tidal forces can cause torques on an orbiting body. Examples are atmospheric heating torques and torques due to asymmetric mass distributions.

Mercury has a 3:2 spin-orbit resonance, that has evolved as a form of tidal lock, but not synchronous rotation (a 1:1 resonance)

"Tidal lock" could be used strictly to mean only the 1:1 resonance that develops in circular orbits, or it might also refer to other tidal resonances, such as Mercury's, that are possible with more elliptical orbits.

The semantic difference is that "synchronous orbit" is simply the description of an observation, a phenomenon, while "tidally locked" describes a mechanism, an interaction. You asked because the mechanism typically results in the phenomenon; but they aren't perfectly congruent in the Venn diagram — there are tidal locks that don't result in the same period, and there are synchronous orbits not caused by a tidal lock:

Others have already mentioned the Mercury exception whose tidal lock results in a synchronization whose ratio is not 1.

An example for a synchronous orbit not caused by tidal forces is your TV satellite.1

1 I must admit that I had second thoughts after I wrote this — even at 36 Mm Earth's gravitational field is probably too inhomogeneous to ignore that. But an answer of the indefatigable uhoh indicates that TV satellites indeed control their attitude by different, active means. In other cases though, passive attitude control through tidal lock is not unheard of.

A synchronous rotation should also occur in the absence of any tidal forces in the traditional sense, even in case of a perfectly rigid spherical mass in a homogeneous gravitational field. That is if one accepts the claim of General Relativity that gravitation propagates with the a finite speed (the speed of light). As I have shown in a recently published paper Retardation effects on observed particle distributions (full text here) an object with uniform density will appear to be non-uniform if it is rotating in case of a finite signal propagation speed. The receding parts of the object will appear to have a higher density (by a factor $1+\frac{v}{c}$) and the approaching part a correspondingly lower density. See the illustration below for the case of a clockwise rotating ring (v=0.5*c) as seen from an observer on the positive x-axis (x=3)) 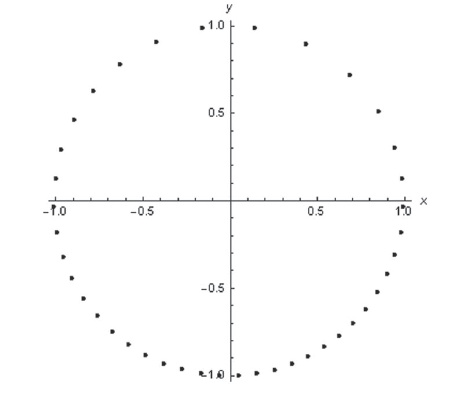 As the gravitational force on the receding half of a rotating object should thus be higher, and that on the approaching half lower than the average force, there should be a torque slowing down the rotation until the object is stationary. That is in case of an orbital motion the object would then have a synchronous rotation. Each mass element of the rotating object would then always have the same distance from the center of gravity and no retardation effects due to the finite speed of gravity would occur.

2
Does tidal locking also slowly reduce the orbiting body's axial angle?
5
Is a three body gravitating system doomed to collapse?
2
Special case of rotation period
1
Do relativistically measured rotation speeds (Special Relativity) change planetary mass slightly through Lorentz transformation?
2
Relative orientation in a 1:1 resonance of a planet and a satellite
4
Why circularization of an orbit has longer time scale than tidal locking?
6
Why would a freezing liquid layer accelerate a rocky body's rotation?
3
Best way to quantify the tidal stress on an exoplanet?