How to calculate the nodal precession range of the Moon with respect to the celestial equator?

[T]he node precession of Moon-orbit with respect to the equator is not complete. in the sense the nodes (again with respect to the equator) are not running over 360 deg in 18 years. But they run over much smaller span of maybe around 25 deg, ~12.5 deg from each side of the solar equinox. The precession works as regular (360 deg in 18 years) when we consider the nodes of the intersection not with Earth equator but with the ecliptic.

I have provided there a rough estimate of the range. The calculation of this was as follows: If at the Solar-node we make the declination of the Moon +5 deg. (due to his tilt 5deg to the ecliptic), and if we assume (this is the estimate) that in this setting the max declination of the Moon is 23.5, this Solar node is 12.62 deg from the the Lunar node. ($\sin(x) = \sin(5)/\sin(23.5)$); hence my estimate of ~12.5 on each side of the Solar node.

But I believe the answer should come a little lower, for at this setting the max declination of the Moon is higher than 23.5 and also it seems not to be 5deg at the Solar node. I tried to calculate this but got somewhat confused, and I'm not sure how to calculate this at the end. Also, I didn't find the correct figure online so I was missing something to validate whatever answer I will come up with.

I hope my question was clear, but here is another way to formulate this question: for a period of 18.6 years to take all the RAs of the ascending (or descending) node [dec=0] of the Moon. What is the maximum/minimum RA we will find?

Edit: It struck me that the inclination that was previously estimated to be 23.5 (and really thought it should be little higher) can be calculated relatively easily. this is because we have 2 points on the arc (RA, dec): (x, 5) and (90+x, 23.5) (because we know that if we tilt the 5 deg at a given location, the locations 90 deg from there not going to change their original declination.) Hence we know where $-x$ is the node location and $z$ the inclination:

I now suspect this is the correct answer but not quite convinced yet. Any kind of validation from this forum would be appreciated. I'm afraid that actual observational data - though will be very close for sure - cannot give us the accuracy I seek, because the 5 deg tilt I used is really ranging between 5 and 5.3 and moves quite fast as @PM 2Ring showed in the last graph of this answer - hence the data should range (if we use the more accurate 23.44 ) between 12.35 and 13.07 and perhaps little lower because of the resolution of observation once a month in which the moon actually passes through the node.

Second Edit (Hopefully the last one):

Unless I have an error it is what it is.

For the record, the general equations with $\alpha$ as parameter are (reminded in those equations the node is at $-x$ not $+x$):

When comparing second edit to PM 2Ring's answer, there is a discrepancy of less than 0.002 deg in Moon numbers. (For more info read my comment to that answer), nevertheless in other hypothetical numbers - especially if we increase the 5 deg inclination to the ecliptic - the difference becomes bigger: up to more than a full degree even. So the method in the second edit is wrong. I think the mistake was as follows: When I performed the 5 deg tilt, I made this tilt in the equatorial coordinate system by adding +5 deg to the declination in a selected point (RA or $\alpha$) on the ecliptic. But this operation results in a plane which is not 5 deg inclined to the ecliptic. (only 5 deg inclined to the "ecliptic" after some another rotation operation). In other words, when we do the right thing: and perform the tilt in the ecliptic coordinate system by adding 5 to latitude at a given ecliptic longitude, and only then convert the orbit to the equatorial system, we will get somewhat different orbit that cannot be obtained by adding 5 to the declination anywhere. The sole exception being when $\alpha=90$ then this method works.

Another final note: My initial estimate calculation $\sin(x) = \sin(5)/\sin(23.5)$ turned out to be the correct answer. I guess this is not a mere coincidence. It means that the intersection of the Moon orbit with the equator after this 5 deg tilt, is equal to the intersection of another imaginary plane path that keeps the 23.5 inclination, but increase the declination in 5 deg at the node.

You want to know the range of RA where the Moon's orbital plane crosses the celestial equator from south to north, so we need to find the line of intersection of those two planes.

The vector corresponding to the line of intersection of two planes equals the cross product of the normals of the planes. We can find those normals using rotation matrices. The relevant parameters are given relative to the ecliptic plane, so it's convenient to work in that coordinate system. I'll use a right-handed coordinate system, treating the celestial sphere as a unit sphere, so our planes of interest are represented as circles of radius 1.

We have the Moon's inclination $i$, which is approximately 5.14°, but it ranges from roughly 4.98° to 5.30°. The obliquity of the ecliptic $\varepsilon$ is currently a little over 23.436°, but we need to negate that to get the inclination of the equator relative to the ecliptic. The final lunar parameter we need is $\omega$, the longitude of the Moon's ascending node, which ranges from 360° to 0° over the course of the lunar precession cycle.

To find our plane normals, we start with a circle in the XY plane, so its normal is the $Z$ vector $(0, 0, 1)$ then we rotate it around the X axis by its inclination, using matrix multiplication. To precess the lunar plane we then rotate it around the Z axis by $\omega$. This leads us to the following equation for the vector of the line of intersection:

Generally, $P$ is not a unit vector, but we can easily normalize it so that does have unit length, if necessary. Bear in mind that our XY plane is the ecliptic. We can rotate $P$ around the X axis by $-\varepsilon$ to determine its coordinates in the equatorial plane.

I won't do all the algebra here, but the equatorial coordinates of $P$ are

Finding the $\omega$ corresponding to the maximum & minimum of $\alpha$ involves some tedious trigonometric calculus and algebra. Fortunately, the results are fairly simple. :)

Hopefully, I haven't messed up a minus sign somewhere while transcribing all those equations. ;)

Finally, here are some actual results. Using the value for $\varepsilon$ mentioned earlier, 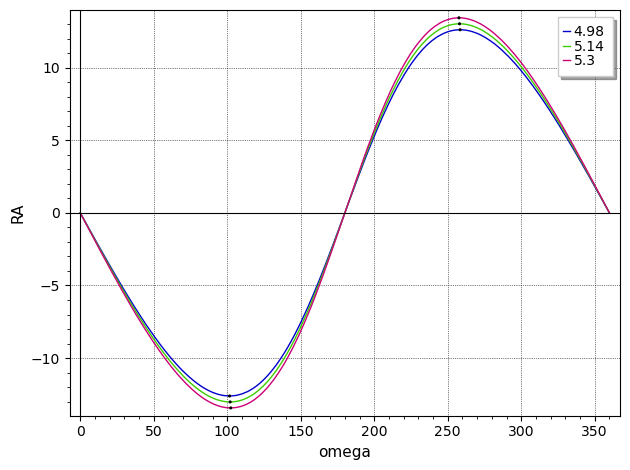 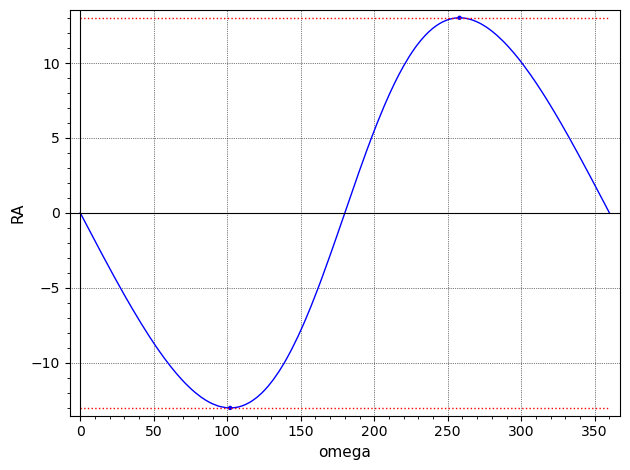 And here's the Sage / Python script that made that plot.

Lastly, here's an interactive anim that demonstrates that the above algebra actually works. ;)

The large black circle is the ecliptic. The blue plane is the celestial equator, the orange plane is the lunar orbital plane. The alpha parameter controls the transparency of the lunar & ecliptic planes; set it to zero if you want unfilled circles for those planes. The blue ball on the equator is the First Point of Aries. The orange ball on the lunar plane is the Moon's north node. Both of those balls sit on the ecliptic. The green line and ball show the intersection of the equator & lunar plane, and the small red balls show the maximum travel of the green ball.

By default, the anim uses -30° for oe = $\varepsilon$ and 10° for inc = $i$ to make it a little easier to see what's happening. You can change those values to whatever angles you want, but inc should be positive and oe should be negative, otherwise north nodes & south nodes get swapped. Also, the absolute value of inc must be less than the absolute value of oe or the program will crash.

Interaction of the Planes

In the following animation, the various planes are intersected with a sphere: the ecliptic is in red, the Earth's equator is in green, and the Lunar orbital plane is in blue:

The following animation shows the locations of the north ecliptic pole in red, the north celestial pole in green, and the north pole of the Lunar orbit in blue, and how they affect the location of the lunar ascending node along the celestial equator. 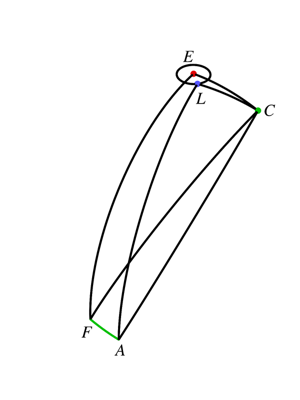 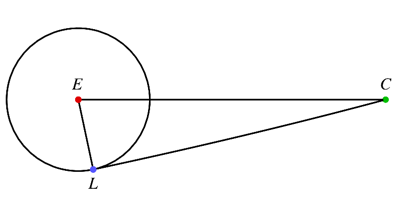 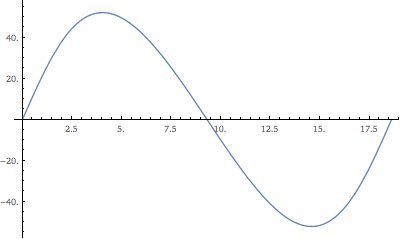 The Lunar Standstills occur when the graph above crosses $0^\text{m}$, that is also when the poles align, and so they occur $9.3$ years apart.

I'm leaving this old answer here because the OP found it useful. But please see my new answer. ;)

The Moon's ascending node progresses with (mostly) retrograde motion around the ecliptic. It's customary to specify it in terms of its ecliptic longitude, but we can easily convert it to equatorial coordinates using the standard spherical trigonometry equations. Since the ecliptic latitude of a point on the ecliptic is zero, those equations simplify to:

We can obtain the ecliptic longitude of the Moon's ascending node from JPL Horizons, via an osculating elements query.

The JPL Planetary and Lunar Ephemerides DE440 and DE441 offers this formula for the obliquity of the ecliptic, which can also be found on Wikipedia:

This Sage / Python script fetches the necessary data from Horizons, converts to RA (in degrees), and plots the results as a graph. I chose the time interval

As you can see, the right ascension of the node covers the full range from 0° to 360°.

Here's the corresponding graph of the declination.

You can easily use the script to create plots covering other intervals: Horizons can supply the necessary data for any time interval from 9999 BC to 9999 AD. However, the formula for the obliquity is probably not valid at the extremes of that range.

Here's a new version of my interactive orbit plane anim script which makes it easier to see that the Moon's RA is indeed close to 0° when its declination is 0° (and going from south to north of the celestial equator). Setting the equatorial checkbox rotates the system so that the equatorial plane is horizontal.

Not the answer you're looking for? Browse other questions tagged the-moon declination precession space-geometry .

20
Where in space would the Earth and Moon appear to be the same size?
7
Why aren't there eclipses every month when the moon's orbit is aligned with the ecliptic as a result of lunar precession?
9
How does the Moon move in the "night" sky as seen from the poles?
6
The moon rises at a different time each day, but that difference changes. Why?

2
How do you find the altitude of the Sun if you are on the Moon?
0
Why is the Lunar Node in a daily motion?
1
Does the Earth ever cross the Moon's path with respect to the CMB?
0
Nodes and declinations of Moon
9
When the Moon formed and early on, did it orbit over the Earth's equator?
2
Moon inclination
2
What percentage of the celestial sphere can the Moon cover?
1
Precise declination of Moon
2
How can the oblateness of Earth impart torque to change the longitude of ascending node of a satellite?
7
Why aren't there eclipses every month when the moon's orbit is aligned with the ecliptic as a result of lunar precession?