why the difference in resolution for images of Pluto?

Pluto was explored by the New Horizons probe. The most detailed images of Pluto's surface come from this flyby. But if you look at the images, there is one hemisphere where the images have a much better resolution that the other. Why is this? 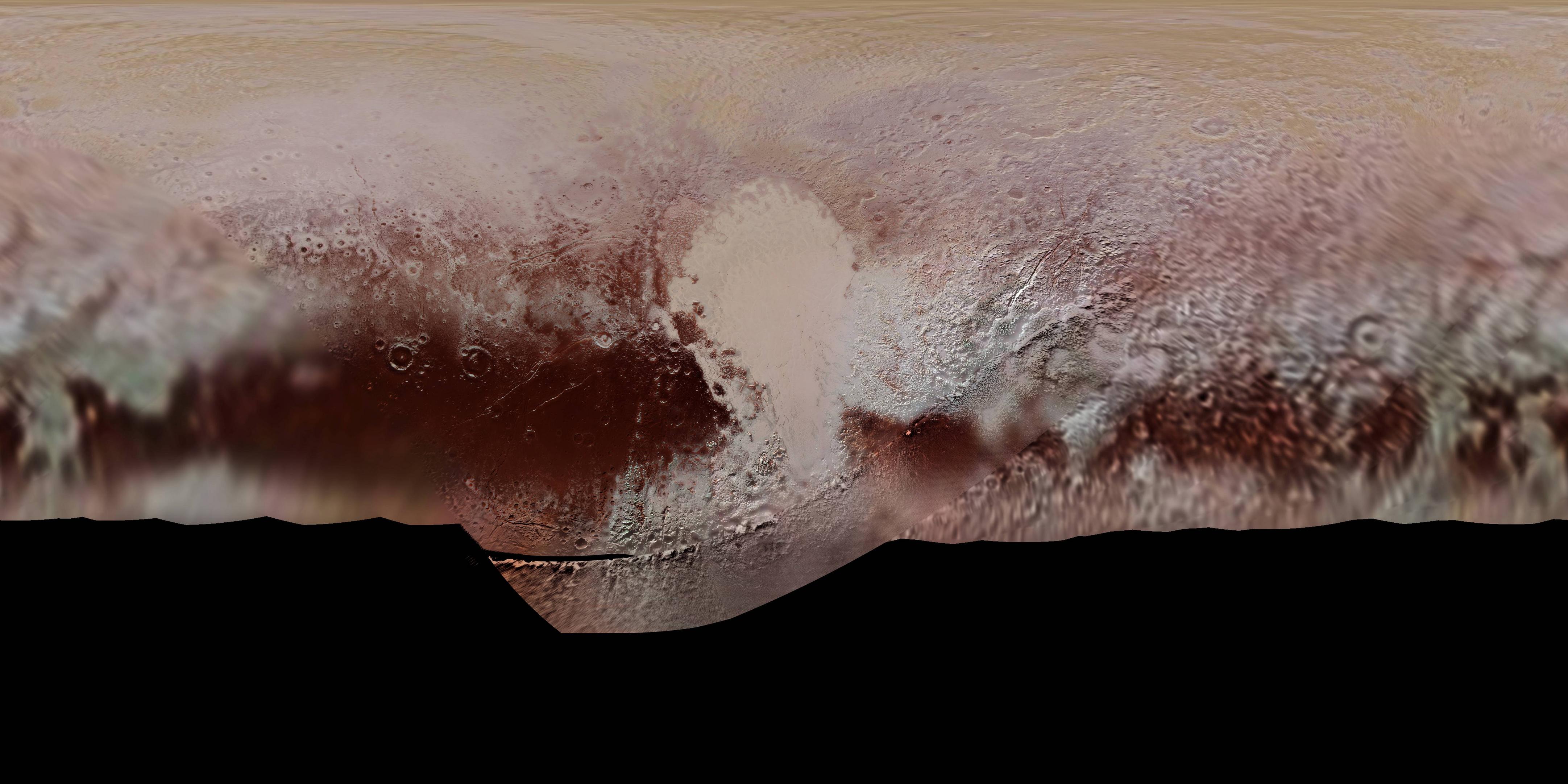 On the left side of this image, there is a oblique line where the resolution is very high to the right of the line, but it isn't as high to the left of the line. The contrast between the two is rather stark. Why is there this difference in resolution? If it is due to the distance between the spacecraft and the planet, shouldn't the image become blurrier much more progressively?

Basically you say it yourself: The reason is in the flyby itself. One doesn't cover every part of the surface with equal resolution when just passing by. Some parts (as seen in the lower part of the image) are not covered at all if the trajectory is aligned such with respect to the rotational axis that one pole is never visible.

"Short" Version: The New Horizons flyby of the Pluto-Charon system took place at a little over 14 km/sec. The images used in that mosaic include the highest resolution images that were taken during the last Pluto day up through encounter, so from about 6.8 Earth days out, through the time of closest approach. Images were taken every ~few 10° of rotation (so, very roughly every ~4–5 hours, Earth time). During that time, Pluto went from roughly 40 km/pix (Pluto <60 pixels across) to 80 m/pix, a factor of ~500x difference in pixel scale. That seam is going to be somewhere, and it is the line where the limb was as far west as it could be during the closest approach. Pluto is rotating in this from the left side to the right side, so the progressively better and better pixel scales (less blurry) fill in from that diagonal, to the left, wrap around to the right edge, and then continue better resolution from right to left.

Tidbit 1— Diagonal: Pluto is tilted on its side, like Uranus, but about 120° instead of about 90° (rounding to nearest 10° here). During the flyby in 2015, that meant the North Pole was in its summer, in "permanent" sunlight (no night time during its ≈6.8-Earth-day-day), and so instead of a simple line of longitude being where that seam is, it's at a diagonal.

Tidbit 2— No South Latitudes: The latitudes south of about 40°S are in their "permanent" night for nearly another century, so that is why it is dark in the mosaic. Except ...

Tidbit 3— That Illuminated Curve: The curve that goes down into more southern latitudes than other parts of the mosaic is actually not directly illuminated by the sun, but it was illuminated by haze: The atmosphere of Pluto was enough during the flyby that it could scatter sunlight into that region, and scatter enough of it that some detail could be brought out. It wasn't expected that we would get that much detail, so when planning the observation, efforts were not really made to try to make it continuous with the direct-illuminated area so there's a bit of a gap.

Tidbit 4— Colorization: The mosaic you link to is actually mainly made mostly from the black-and-white LORRI camera images, which are what get to the ≈80 m/pix scale at closest approach. The mosaic was then colorized by overlaying the much lower-resolution MVIC color data. Those data do not provide true-color due to a down-scoping of the instrument when it was designed, so blue in the image is blue in real life, green in the image is red in real life, and red in the image is near-infrared in real life. The mission team referred to this generally as "enhanced" color. That said, this version you've linked to looks a bit more saturated than I remember the team producing, but it could be that I'm using a different computer monitor. Pluto is, in reality, quite red.

Tidbit 5— Targeting: Based on maps from Hubble data, the team early on decided to target the big bright blob in those images to be near the center of the "encounter hemisphere" - the area that would be imaged at the best pixel scales. So, it is not a coincidence that the "heart" - the convecting nitrogen glacier - was at the center of the best imaging (as some people have claimed).

(I helped a very tiny bit with constructing these, and am helping a very tiny bit more with new versions, so I don't really have sources to link to for all the above information since my info comes from first-hand knowledge.)

Not the answer you're looking for? Browse other questions tagged pluto .

5
What will New Horizons be able to say about a magnetic field at Pluto?
12
Why is there a black stripe in the Hubble images of Pluto?
8
why does pluto have a high orbital inclination
8
Why are there no stars on New Horizons images of Pluto
2
Why are there no more images revealed by New Horizon?
1
Size of Sun as seen on Pluto
4
How much is the zoom of Sun-Pluto eclipse image
4
What is the temperature on surface of Pluto facing Sun?
2
What is the resolution in megapixels of the Hubble Telescope?