Where is it possible to observe the Moon for 24 hours?

I wrote an astronomy olympiad yesterday and there was one task I couldn't figure out an answer to:

Is it possible at all to observe the Moon for such a long time?

Estimate at what latitudes it is possible to observe the Moon for at least 24 hours.

I wrote a small program to plot the position of the moon every half hour, during a year.

Here's the polar diagram (azimuth + elevation) for 2015, as seen from the Equator. It was during the last minor standstill, so the moon was close to the celestial equator: 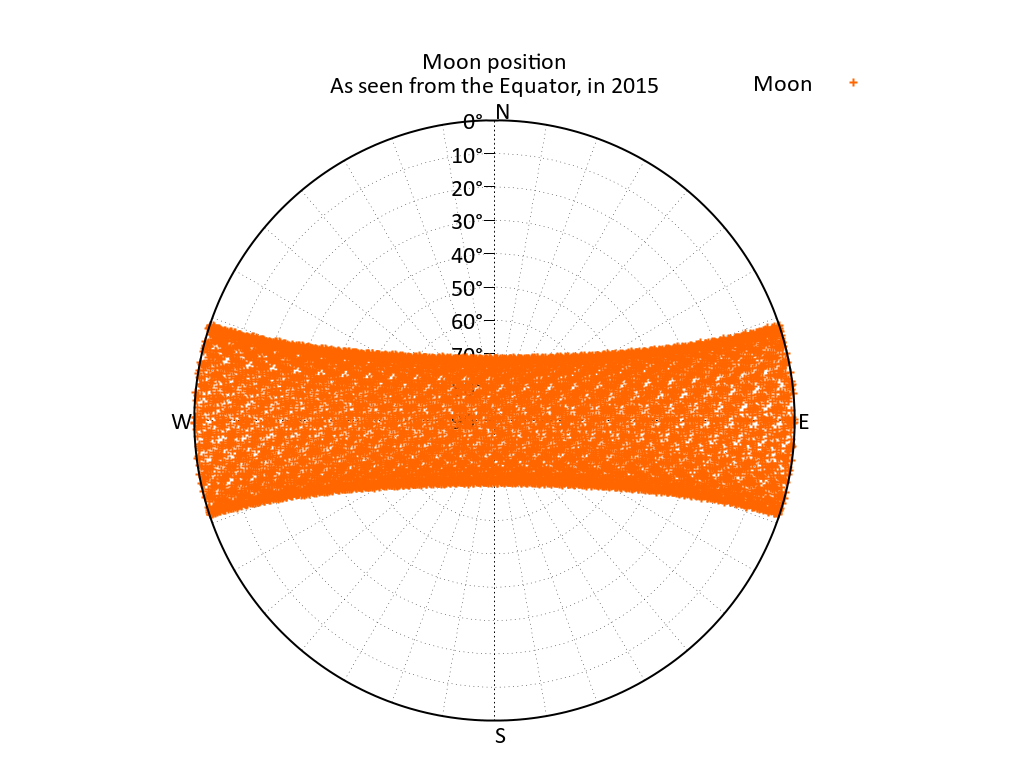 and the same diagram, for 2025. It will be the next major standstill, so the moon will have a much wider range: 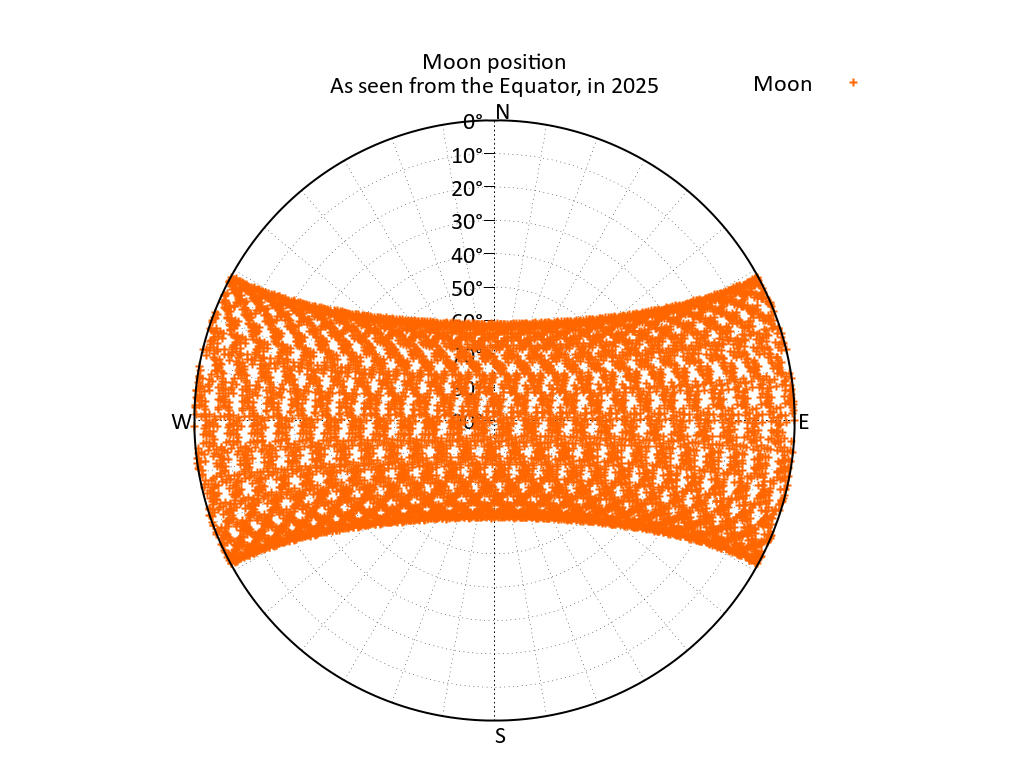 This diagram is convenient, because you can directly see the required latitude if you want to see the moon for a whole day: it's the lowest elevation when the moon crosses the meridian. 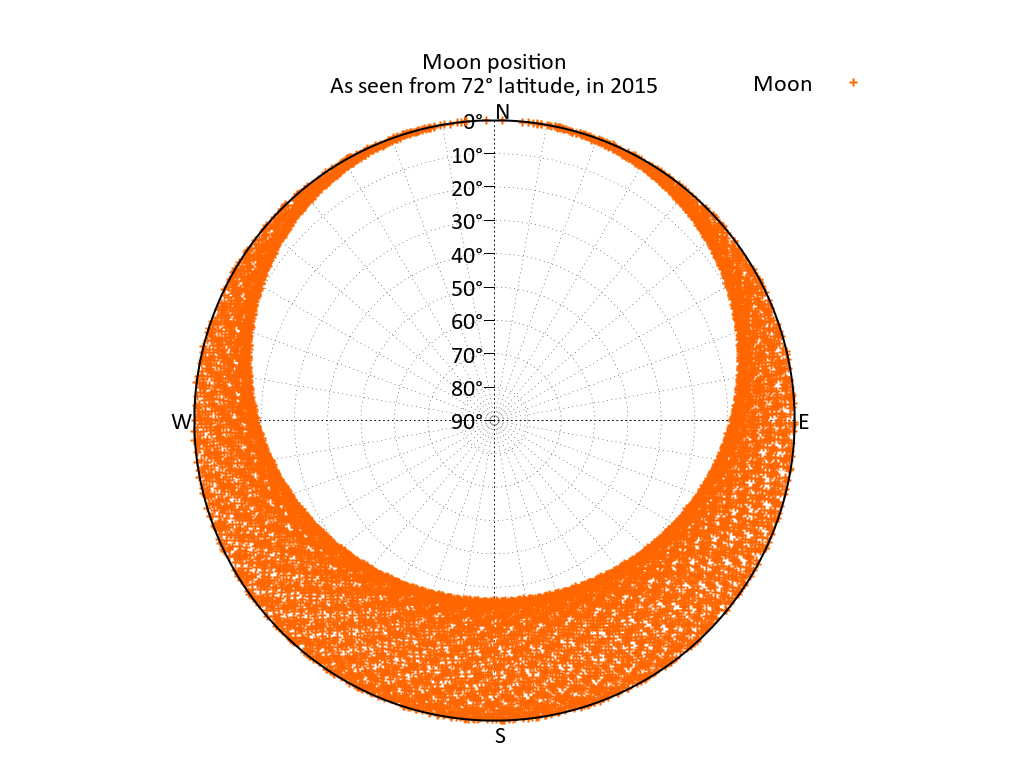 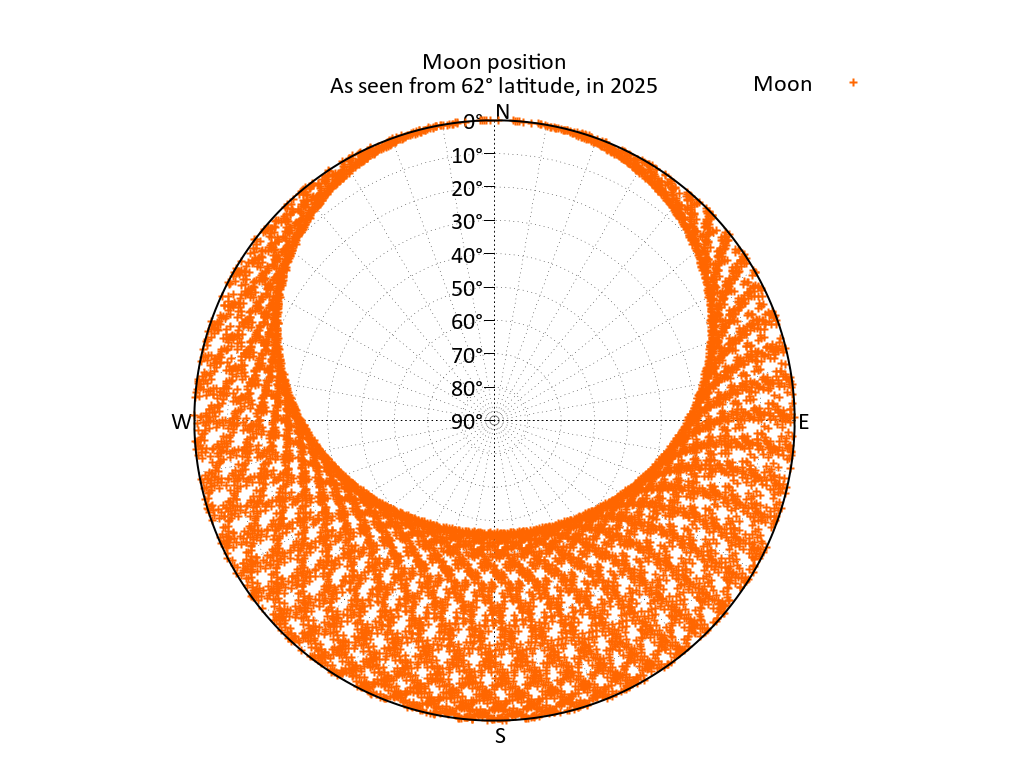 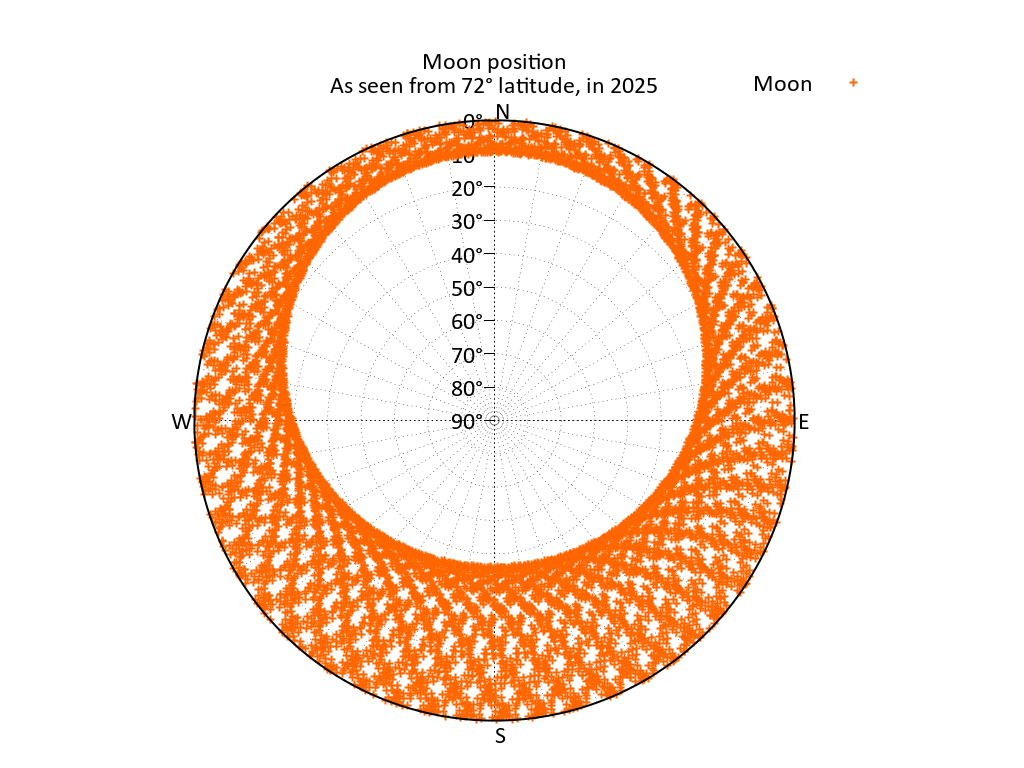 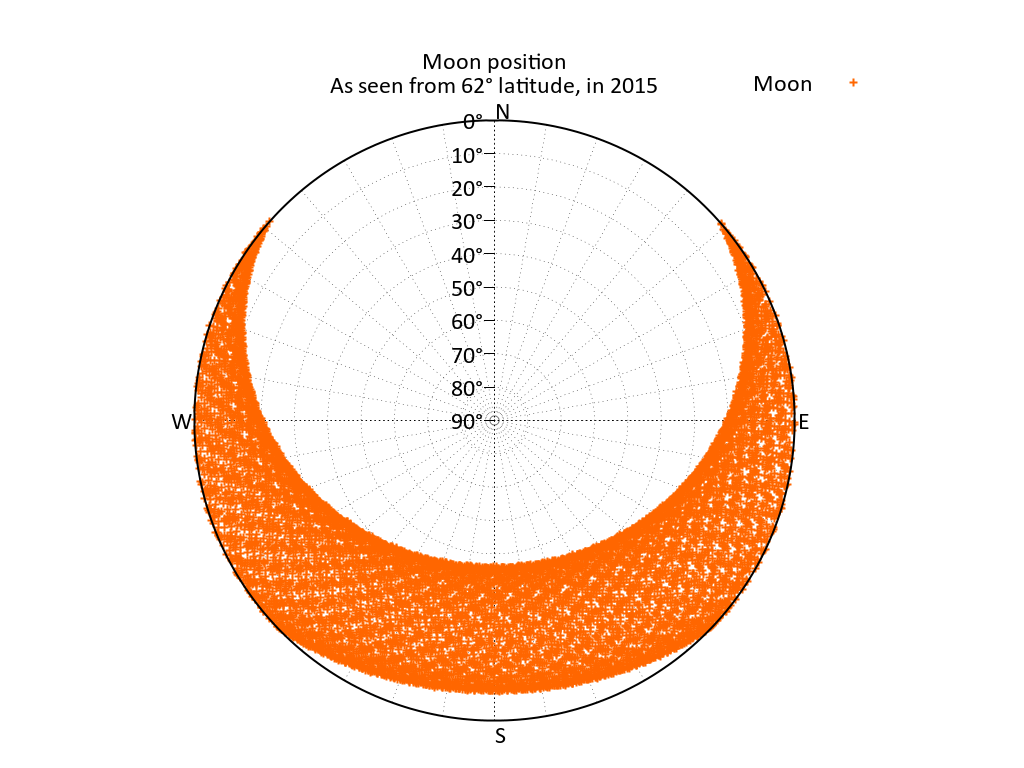 The diagrams would have the exact same shape in the southern hemisphere, but flipped vertically.

For reference, the program was written in INSEL, which is similar to Simulink: 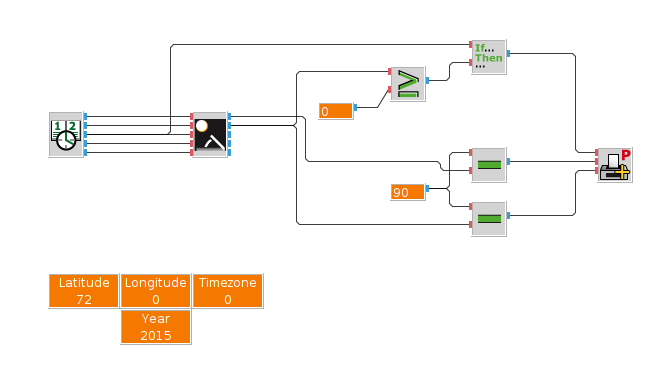 The diagram was created with Gnuplot:

On the morning of 4th of April 2025, at 62°N, the moon will be visible due north, ready for a complete rotation above the horizon. 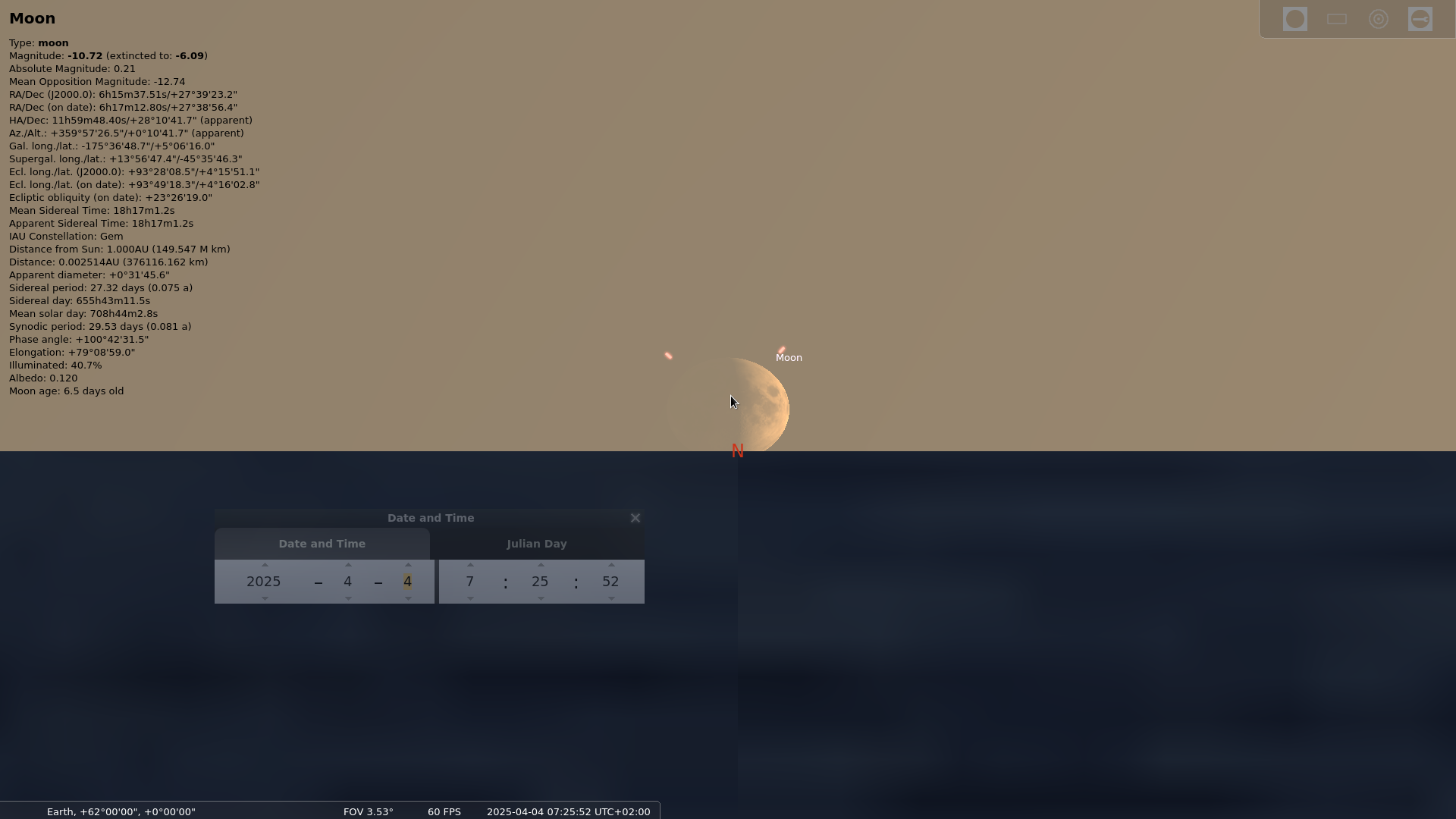 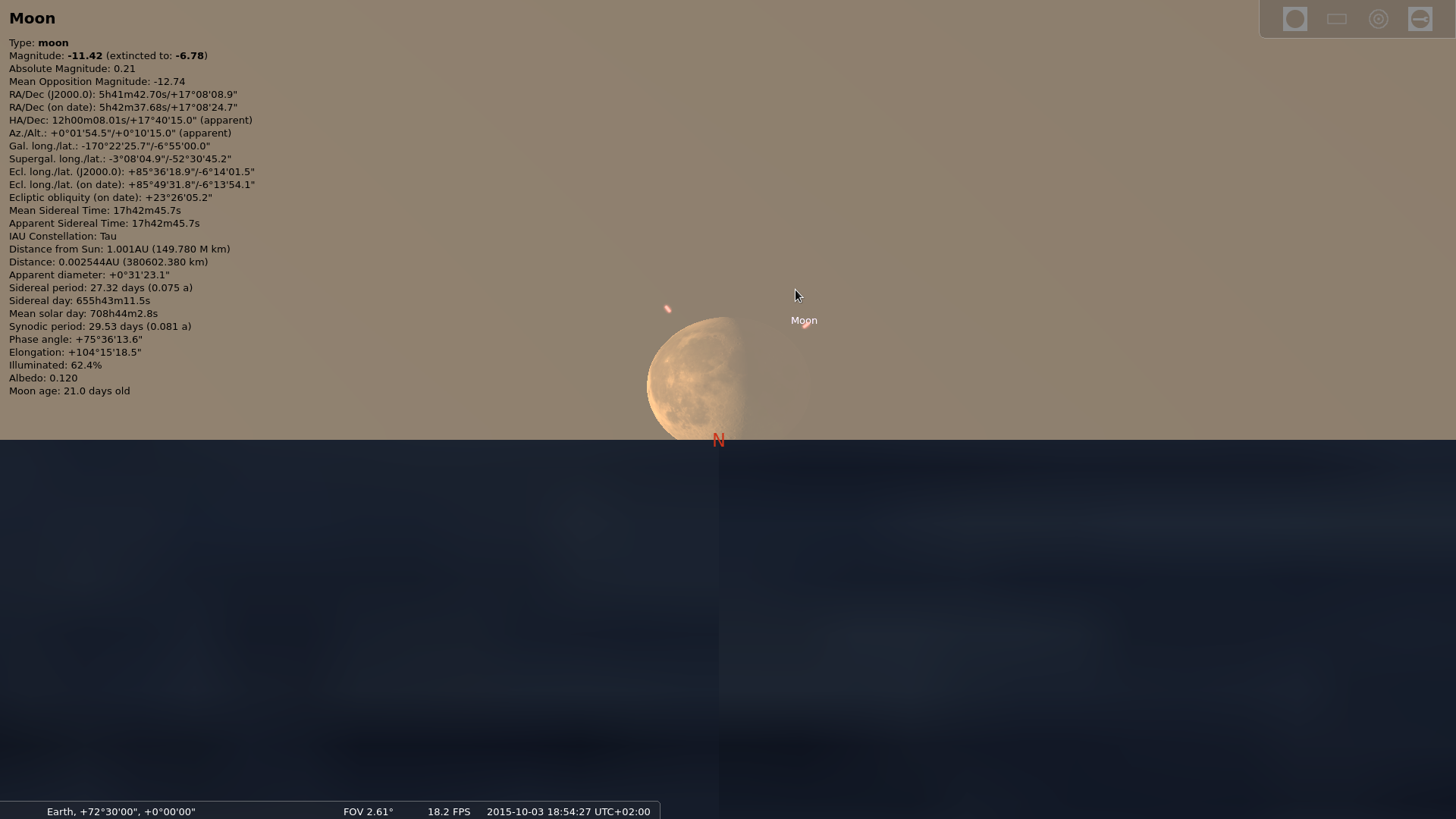 Near the Poles is where unusual things occur. Like, in parts of Greenland, which is pretty close to the north pole, the sun never sets during summers, and the sun never rises during winter. The same way, during some parts of summers and winters over there, the full moon never sets and new moon never rises. But it's not only during winter solstice and summer solstice that you can see the moon all day long. In fact, every month, on some days, you can see it all day long. Also, moon's orbital inclination is around only $5^\circ$. Due to this low orbital inclination, it can be observed 24 hours long only in some places on the earth. But if its orbital inclination was greater, it could have been observed 24 hours long all around the globe.

You can also verify if this is right or not by using Timeanddate's interactive night sky map. The link is here: https://www.timeanddate.com/astronomy/night/
When you go there, it will first show the map for your location. You can type the city you want to find the map of in the text box on the right. For example, I typed in Nuuk, which is Greenland's capital.

Then, I went to the night sky map of Nuuk and chose the date as 5th December 2021 (new moon day). As you can see in the image below, on the top left, it doesn't show the rise and set time. This is because it's almost winter solstice and it's a new moon day. Therefore, it doesn't rise at all. 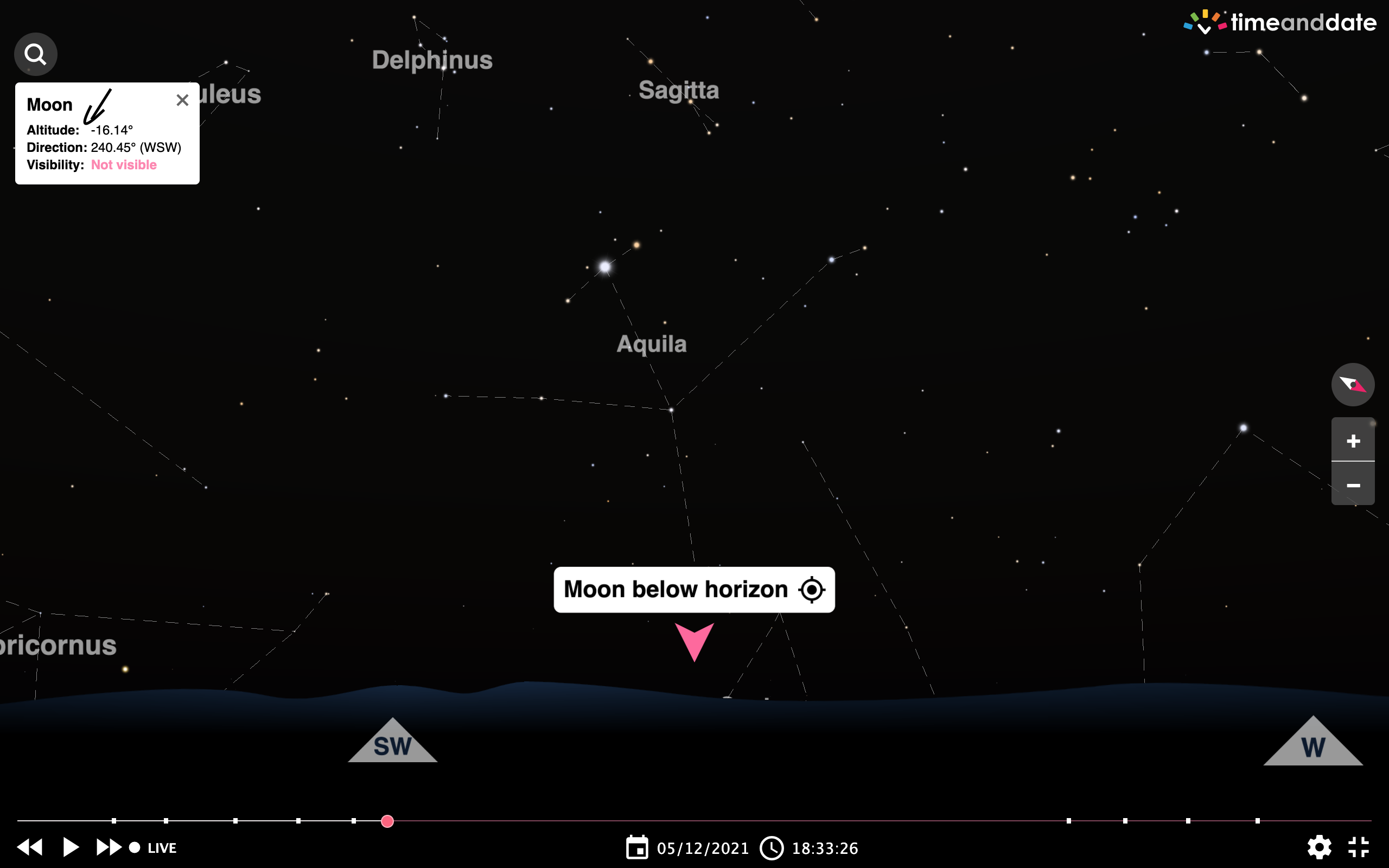 I then changed the date to 19th December 2021 (full moon day). As you can see in the image below, it doesn't show rise and set time because it's up all day! It shows the best time to see it too. This day, you could observe the moon all day long. 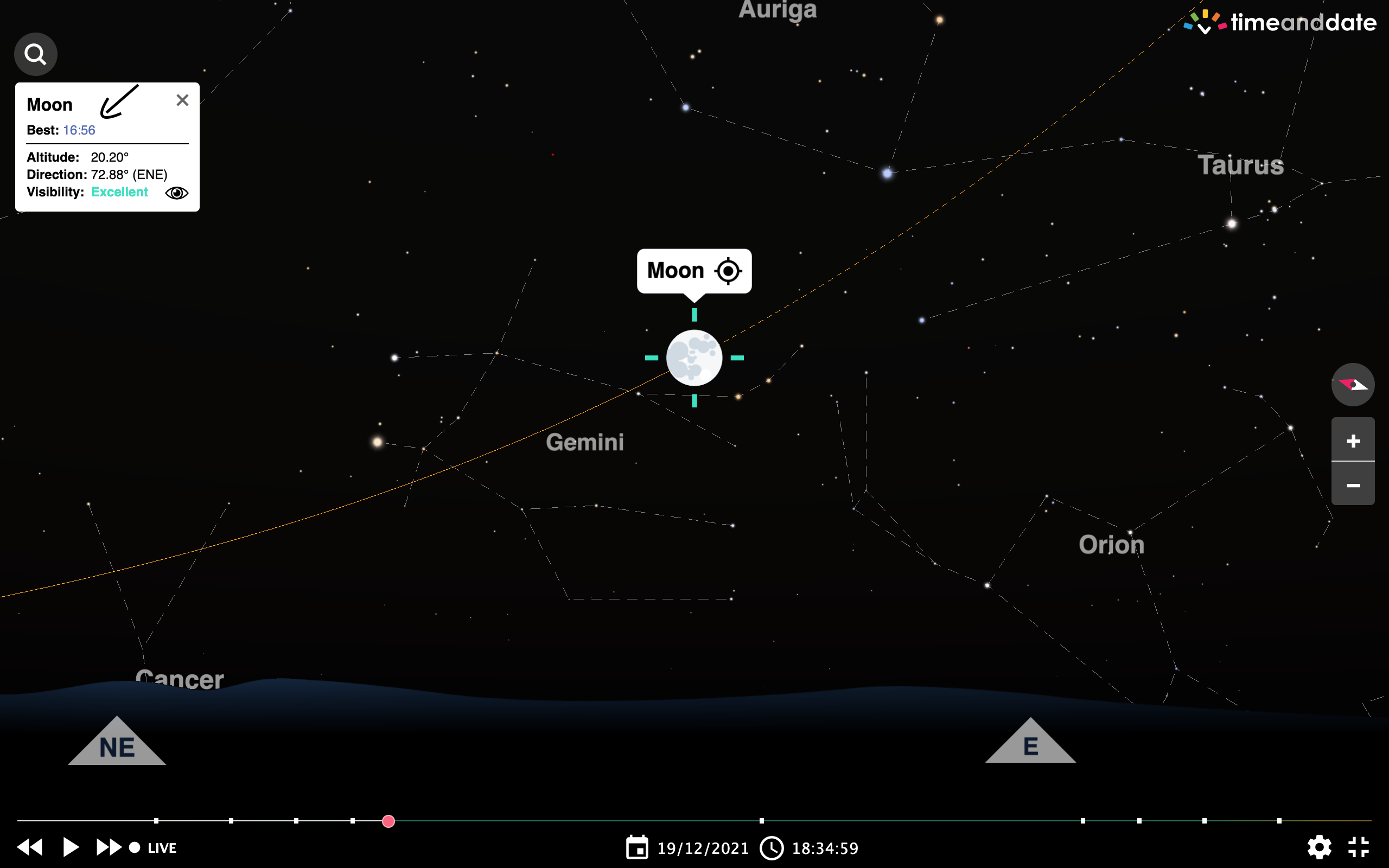 In addition to the previous answers, another point might be added. We are dealing with the Moon. The Moon - just like the Sun - has a movement eastward (in the right ascension) during the day which makes the distances between Moon Rises 24h 50m apart on average. So the simple answer taking into account only the Moon maximum declination will result in location (the location closet to the equator) where the Moon is seen for ~ 24h and 50m.

Now, in light of the other answers, lets take the extreme case that the declination of the moon is ~28.5 degrees. Moreover, In the settings where the Moon is on his max/min declination, we can safety assume the Moon movement eastward is even faster (for more info the reader might refer to the "equation of time" and "effect of Obliquity". In short it says that when the Sun/Moon at Solitices/standstill the days are longer, since the movement on the orbit is mainly in RA component).

Let's assume then, for the sake of the example, that in this setting we save 60m - so the time interval between subsequent Moon crosses of the Meridian is 25h. We are left to ask how much we can now come closer to the equator from latitude of 61.5? On what latitude the declination circle of $\delta=28.5$ cuts the horizon in 2 points where the distance between them (RA-wise) is exactly 1 hour (= 15 deg)? if we mark $\phi$ as the latitude and $\alpha$ RA for a LST of 0. we know that:

(*) This is only one facet however and of course far from being accurate.

In this answer (and other answers actually...) I assumed the declination component stays fixed during the day. According to my calculation however the movement in declination of the Moon cannot be neglected. Even in the best case scenario of minor Lunar standstill we will have about 0.3 deg movement in declination at minimum during period of 24h (we could have 0.15 each side of the limit. it looks to be confirmed here). This effect in general looks little stronger than the 24h 50m effect - So I believe we will need to go at the end little farther from the equator to see the Moon on for 24h. Though it hard to say with certainty since the movement of the Moon is full of inequalities.

The Artic and Antarctic circles are, by definition, the latitudes at which the sun is visible throughout the summer solstice. Keep in mind that "summer solstice" for the Antarctic circle is in December. Also, since the actual solstice isn't exactly centered on the "day" (that is, the middle of the solstice isn't generally at noon), the actual length of solar visibility is more complicated.

The latitude of these circles, 66° 32′, is 90° minus the inclination of the Earth, 23° 68′. At the summer solstice, the Earth's tilt points towards sun. If you imagine the y-axis as being perpendicular to the orbital plane with "up" being in the north-ish direction (the "ish" because of the tilt), and the x-axis pointing towards the sun, the Earth's axis is tilted 23 degrees clockwise from the vertical. As long as you travel less than 23 degrees counterclockwise from the North pole, you haven't traveled far enough to counteract the tilt, so you are still in sunlight (which direction counterclockwise represents changes over the course of the day; it's whatever longitude is at "midnight"). Since the North pole has a latitude of 90 degrees, this means the boundary is at a bit more than 66 degrees.

All of this is in terms of the sun, but similar logic applies to the Moon. However, the Moon's orbital plane isn't exactly the same as the Earth's, so the numbers aren't exactly the same. It differs by about five degrees, and it varies as to what direction that difference is with respect to the Earth's inclination. Thus, the latitude varies between 66-5 and 66+5 degrees, i.e. between 61 and 71 degrees.

Not the answer you're looking for? Browse other questions tagged observational-astronomy the-moon coordinate .

12
Why does the Moon never set in Svalbard, Norway?

12
Is the moon "perfectly" tidally locked and, if not, how long would it take us to observe it's rotation?
2
What is the extent of the "worldwide campaign" to observe near-earth object 2012 TC4?
7
Why isn't the moon orange all the time?
12
How does the Moon look like from different latitudes of the Earth?
7
How much do starlight and artificial light illuminate the Moon?
1
This article says the moon may start moving closer to the Earth in the distant future; could this be true?