Can Jupiter's rings be seen with the naked eye by an astronaut nearby? How difficult would it be?

I understand that there would be different answers depending on how far is "nearby", depending on how inclined our orbit is, and what is our alignment with the planet and the sun (forward scattering and back scattering). Let's say we are beyond the radiation belts, on Callisto or Themisto, or a spacecraft with an orbit between them, (1.8 to 7 million km)

The glare from the planet can make it very difficult, how much so?

Voyager's, Galileo's, NH's and Juno's(navcam) pics of the rings all had high exposures, the Pioneers couldn't detect them at all.

There is a dense band where Adrastea and Metis orbit , then "gossamer rings", and then a halo... here I ask about the first of these, the densest.

We all know and agree that we would easily be able to see Saturn's rings from every angle, distance and orientation.

How visible are Jupiter's rings from nearby, under what circumstances?

If you can also comment on Uranus' and Neptune's cases I would very much appreciate it.

Here is an answer based on photometric arguments: The astronaut probably would not be able to see the rings, but it would be worth a try.

I would recommend the astronaut float somewhere at a distance of ~1.5 $R_J$ from Jupiter's center, where $R_J$ is the planetary radius of 74,000 km (at back of envelope precision). That way, they can look in a direction where Jupiter and the Sun are not in the field of view. You are correct that glare from the planet makes it difficult. This is especially a problem for the existing spacecraft and telescope observations of the rings, because the rings and Jupiter are typically close together in the sky. For an astronaut, that would be a huge problem. The astronaut would want to use some kind of a baffle to block bright objects (like a handmaid's bonnet, but in vantablack). Being at a location of 1.5 $R_J$ puts the astronaut inside the rings, so they can look toward the rings – and away from Jupiter – at the same time.

Then we need the effective visible area of the rings. I will cheat a bit on the geometry. At 1.5 $R_J$, the astronaut is 0.3 $R_J$ from the highest-opacity part of the ring, near 1.8 $R_J$ (throop++2004, fig. 7). The equivalent thickness of the rings if they were perfectly reflective, called the VIF, is about 4-15 cm (throop++2004, fig. 14). The rings are going to stretch fully across the sky from the astronaut's viewpoint, so I will cheat and say the length is half the diameter of a 0.3-$R_J$ circle. This works out to an equivalent visible area (for fully reflective rings) of 7 km2.

Now we can get the luminous flux of the part of the rings visible to the astronaut, by multiplying the illuminance by the equivalent visible area: 5000 lux x 7 km2 = 3.5x1010 lumens.

The illuminance from the rings, at the astronaut, can be found if we assume each part of the rings is isotropically scattering light back into a half-sphere which has a radius of 0.3 $R_J$. This gives an illuminance of 1.1x10-5 lux, or 0.11 millilux (0.11 mlx).

Would rings with illuminance of 0.11 mlx be visible to the astronaut? The Milky Way gives an illuminance of 13 mlx (NPS), so the rings would be 100x fainter than the Milky Way. This would be pretty hard to see. For comparison, a 6th magnitude star is barely visible and gives an illuminance of 8 nlx (wiki:Apparent_magnitutde). The rings at 0.11 mlx are giving more than 10x more light than this faintest star, but unlike the star, the ring light is spread out in a line across the whole sky from the astronaut's viewpoint. So I think it would be pretty difficult to see the rings, but worth a try.

Here is a separate answer based on a couple of visible light images. It looks like the astronaut has a very good chance of seeing the rings. 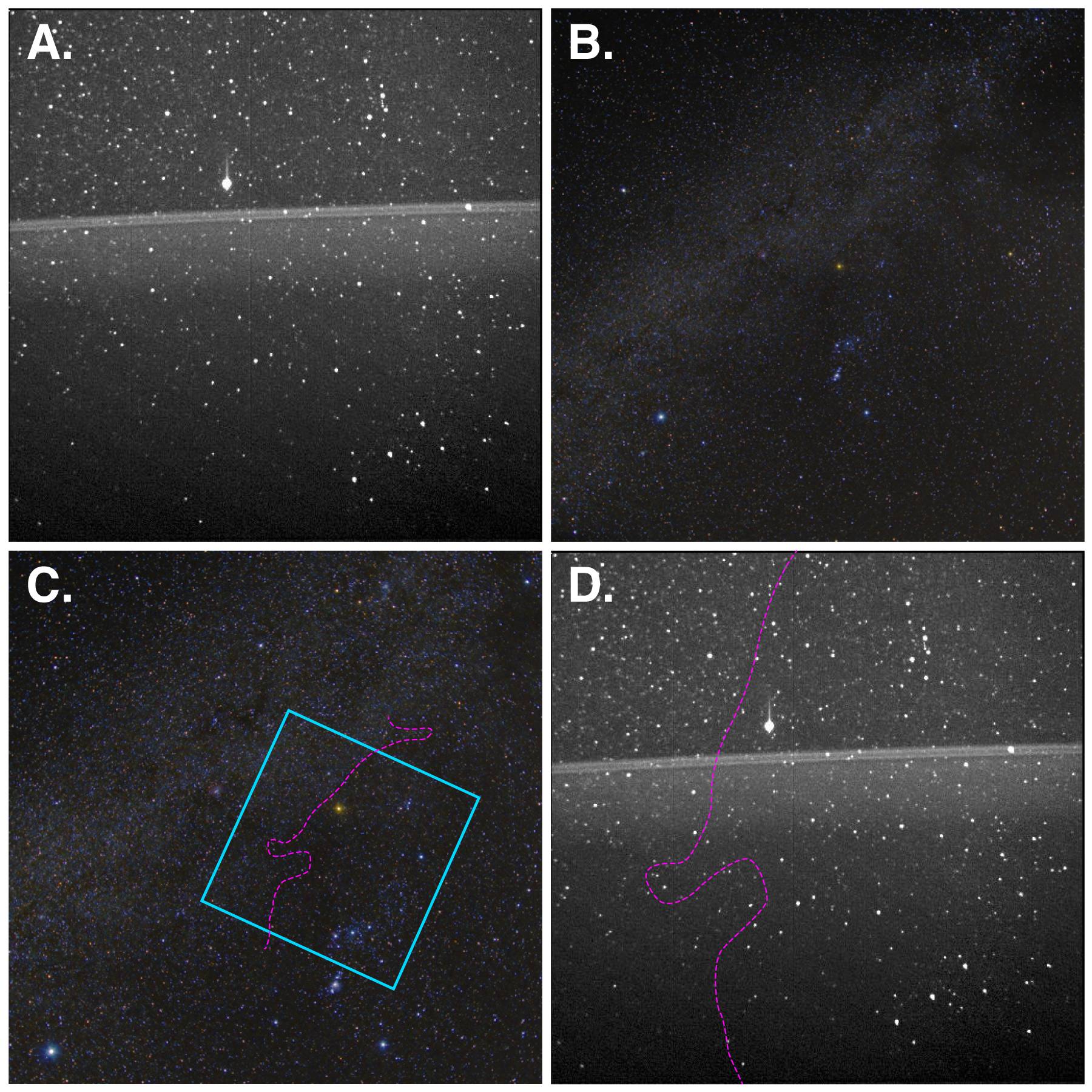 A. A wide angle image, taken from inside the ring by Juno's Stellar Reference Unit (SRU). The image includes the constellation Orion; clicking the link shows where Betelgeuse is.

B. An ultra-wide angle image, from the Fort Lewis College Observatory. Although the processing details describe stretching with Photoshop curves, it won't matter because we are focusing on brightness differences between the Milky Way (stretching from lower left to upper right) and the stars.

C. An enlarged section of panel B, with a cyan outline over the SRU image footprint. I put a magenta line where I visually see a contour in Milky Way brightness.

Not the answer you're looking for? Browse other questions tagged jupiter planetary-ring naked-eye visible-light or ask your own question.