Why do satellites appear as streaks in telescope images?

Can you explain me in simple words why the satellite in this telescope image appears as a streak? The exposure time is 1 second. 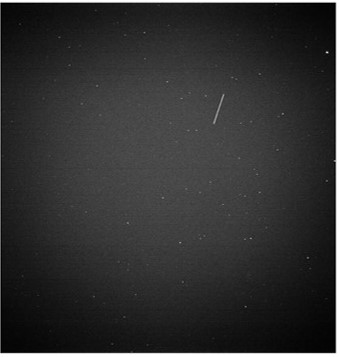 Satellites are moving. They are in orbit around the Earth. Satellites in low Earth orbit are moving at about 7000 m/s relative to the ground.

In the one second that the photograph is being exposed, the satellite moves.

Because it moves, it appears as a streak.

Can you explain me in simple words why the satellite in this telescope image appears as a streak? The exposure time is 1 second.

This drawing should explain it: 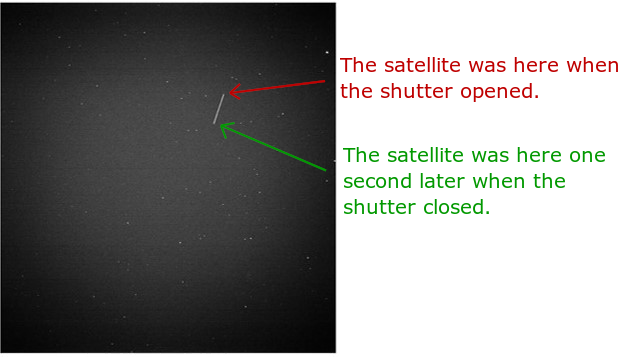 (Note: It could be the other way around, too. There's no way to tell from the image which way the satellite was moving.)

A relatively simply way to remove the streak is to take two-or-more photos, with a short pause between them. The stars won't move much in that time, but the satellite will have drawn a short dash on each frame.

Then use image processing to remove pixels that aren't in both/all images. This will eliminate all of the satellite's skid-mark, unless it precisely obscures another bright object, so use three photos.

One place this falls down is in a Starlink "train", where multiple satellites track similarly and could possibly overlap.

This is also known as a trail. It happens when you try to capture an image of a moving object, with a low shutter speed. 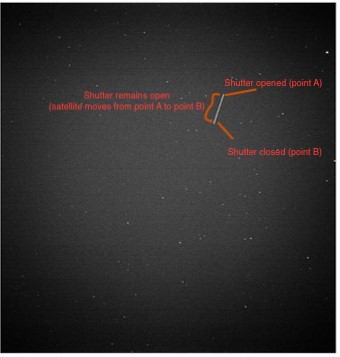 This trail can be reduced by increasing shutter speed. But that decreases the brightness of the satellite. Therefore, the exposure has to be made larger. The balance of these two things (and other things also) helps get a perfect image of satellites. This is the reason it is so difficult to capture proper images of satellites.

Not the answer you're looking for? Browse other questions tagged observational-astronomy telescope space-telescope satellite image-processing .

6
Most important feature of a telescope
7
Why do some artificial satellites decrease and increase in brightness multiple times?
2
How are the gaps filled in images captured by CCD arrays?
5
How do observational astronomers manage streaks and other artifacts from objects in Earth Orbit?
2
Exposure details for this now (in)famous image from Lowell Observatory?
3
Brightness, altitude & azimuth for satellites?
2
Is the LSST (Vera C. Rubin) telescope going to change position every 20 or 35 seconds?
5
Can the transit of satellite in front of Sun be visible in 10-inch telescope?
1
Why are diffraction spikes left in JWST public images?