What's the difference between the Roche lobe and Roche sphere?

I am just beginning to look into this topic, so apologies if there are any striking misconceptions in the following.

From Wikipedia, the Roche lobe is "the region around a star in a binary system within which orbiting material is gravitationally bound to that star". So, to my understanding, this is the region around the star where matter is able to "remain near" the star and not get "sucked away", for example by the other star in the system. Roche lobe overflow seems to be the term used to describe the case where matter falls out of the Roche lobe of one star and hence is "lost" by the star.

On the other hand, the Roche sphere (or Hill sphere) seems to be a confusingly similar concept! Wikipedia again states, "to be retained by a planet, a moon must have an orbit that lies within the planet's Hill sphere". But isn't this the same as the interpretation of the Roche lobe? The Wikipedia article also mentions stability in the face of perturbations from the gravity of a larger body, but I don't really understand what this means.

Could someone explain in simple terms the difference between the two? Thanks in advance.

(Note: I have seen the question What is the difference between Sphere of Influence and Hill sphere?, but I think that is a distinct question since the SoI is not the same as the Roche lobe; please correct me if I am mistaken!)

The Roche lobe is a gravitational potential well of a two-body configuration. Technically, it is the potential energy per unit test mass which is orbiting the center-of-mass of a binary-star system at the same rate as the two stars. It is often depicted with equipotential surfaces and the 5 Lagrange points. The Roche lobe includes gravitational and centripetal energy, so it's derivative is the acceleration on the test mass. Thus, it is useful, among other things, for determining when a particle is gravitationally bound to a star in a binary system. You can think of the Roche limit of a body in a binary as the limit beyond which particles are no longer "part" of that body.

The Hill sphere is an approximation of the perturbations of the larger body in a binary system onto the smaller (i.e. less massive) body in the binary system. So, you can see how it is distinct, necessarily, from the Roche lobe. You can consider the Hill sphere as the limit where gravitational perturbations from a more massive body become weak compared to the self gravity of a less massive body.

Here is a figure that nicely depicts the difference of these boundaries from the wiki article about the Hill sphere: 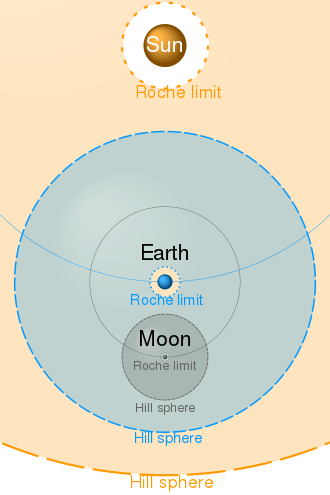 The sphere of influence is an approximation where you only consider gravity of nearby bodies, and not of more massive ones that are further away. As shown by the figure below, the SoI is a decent approximation to the Hill sphere for Solar System bodies that are not too close to the Sun. 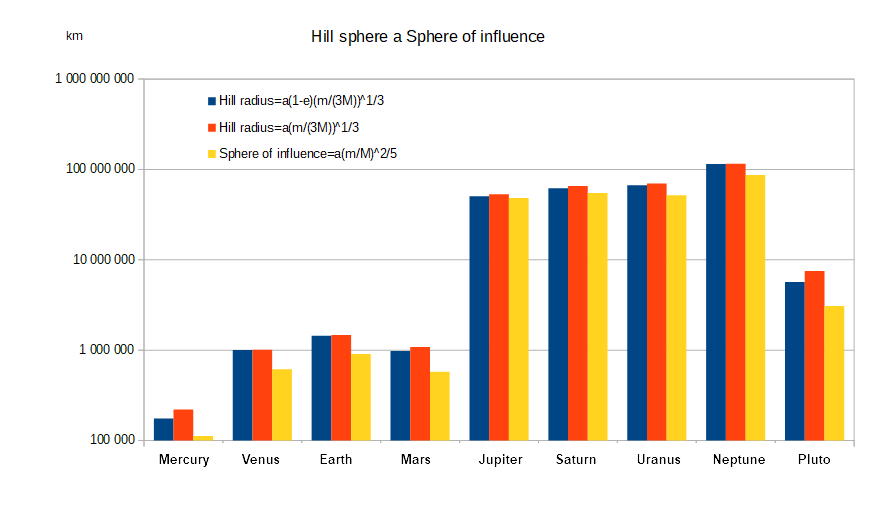