Why does a timelapse video of a stationary Milky Way make the horizon appear to move from horizontal to vertical?

In this video, with a rotating camera keeping the Milky Way 'stationary,' the horizon appears to transition form horizontal to nearly vertical.

I understand the Earth rotates and that it is tilted on its axis as it does so.

However, I can't quite wrap my head around why the visual should have the angle of the horizon change like this.

Can anybody provide an explanation for this perspective? It would be much appreciated.

(We can tell it's not 45° south because then the Milky Way and the surrounding constellations would be upside down compared to what's seen in the video.)

Anyway, at 45° north, the north celestial pole is located due north (obviously!) at 45° above the horizon. (If you know how to find Polaris in the night sky, you can easily pinpoint its location to within less than a degree.) As the Earth rotates around its axis, everything in the sky will appear to move in concentric circles around the celestial pole.

(Well, everything except satellites, meteors, airplanes, auroras, clouds and other stuff close to the Earth, at least. The Sun, the Moon and the planets will also deviate slightly from circular paths due to their proper motion, but not enough to make a significant difference in just one day. But for the fixed stars, including the Milky Way, the circular path around the celestial pole is exact, at least on human timescales.)

Here's a long exposure photo of star trails around the north celestial pole from Wikimedia Commons (photographed by 0x010C, used under the CC BY-SA 4.0 license) to illustrate this: 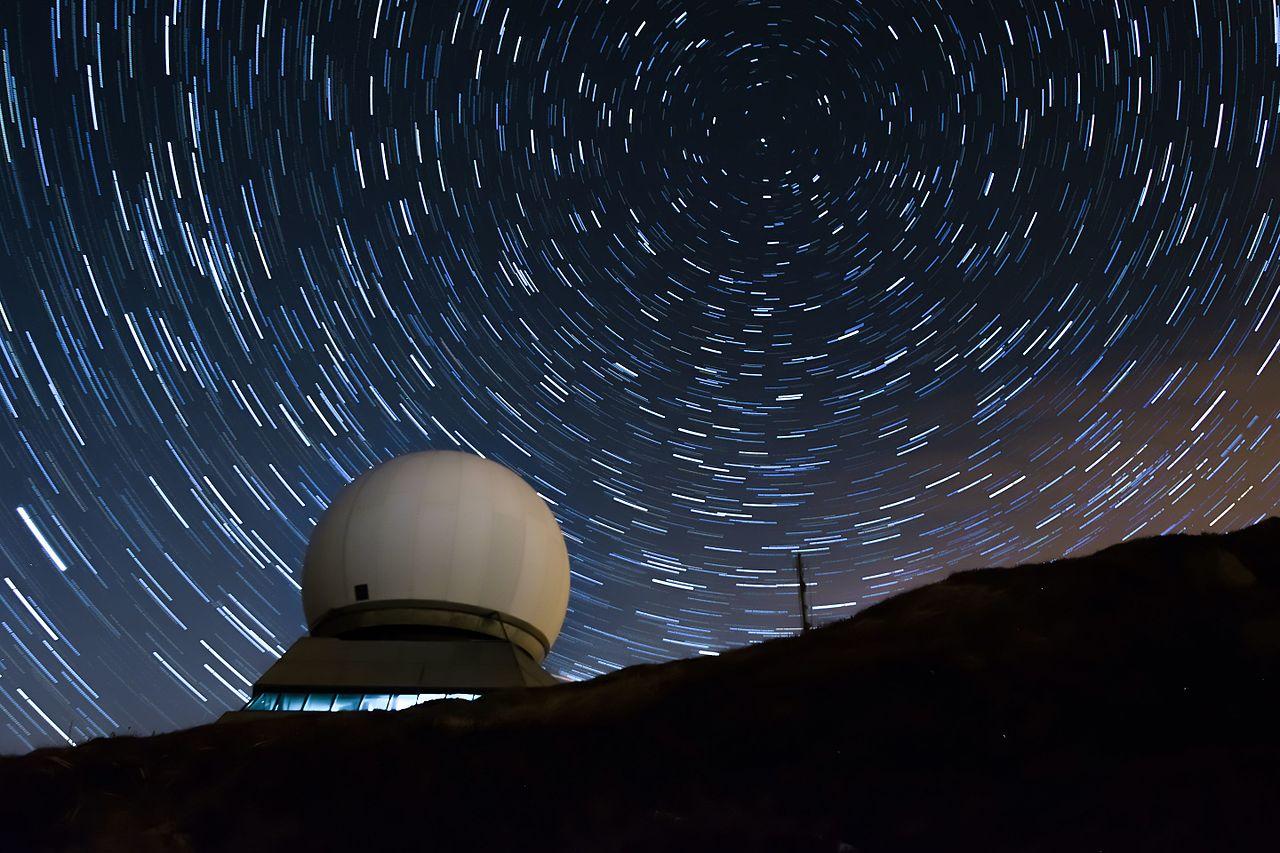 Anyway, let's imagine that we could see the lines of celestial latitude and longitude as a giant map grid drawn in the sky — something like the picture below (public domain, from freesvg.org) but viewed from the inside, from a point near the center of the sphere: 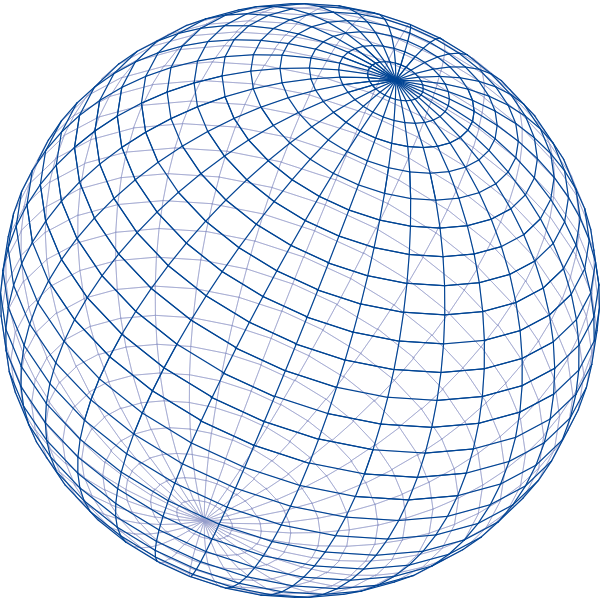 The point(s) where all the lines of longitude meet are the celestial pole(s), and the star trails in the earlier photo above would run parallel to the lines of latitude circling the poles.

Now, standing on the surface of the Earth, with this imaginary sky grid around us, we can only see (about) half of it at any given time — the other half is below the horizon. But the grid is rotating around the celestial pole, so parts of it continually disappear on the western horizon as other parts rise into view from the east.

Near the pole, the lines of latitude will form complete circles in the sky around the pole, and stars at those latitudes will never set below the horizon. But the latitude lines further away from the pole will be partly hidden below the horizon, so that only a part of the circle will be visible as an arc in the sky, which stars close to it will follow from the eastern horizon to the western one.

(Or you could just imagine looking at the actual night sky, and at some feature that crosses the equator at an approximately right angle — like, say, the Milky Way.**)

But now let's wait a bit, keeping our attention on the imaginary crossing of these two imaginary lines, as the celestial sphere rotates around us and the crossing point moves along the arc of the equator in the sky. Clearly, as we follow the arc of the equator from its highest point down towards the horizon, it cannot remain horizontal, but must turn downwards. And, conversely, the lines of longitude crossing the equator also cannot remain vertical but must turn along with the equator to maintain a right angle with it.

At the horizon, the celestial equator will cross it at an angle that equals 90° minus the latitude you're standing at on the Earth's surface. And, conversely, when the crossing point we were tracking with our mind's eye meets the horizon, the line of longitude (which was originally vertical at the apex of the arc), still being at right angles from the equator by definition, must be tilted at an angle equal to our latitude on the Earth's surface.

*) As I noted at the beginning, things would look different near the poles or close to the equator.

Near the north or south pole, of course, the corresponding celestial pole will be almost directly overhead, and stars will move in circles around it, approximately parallel to the horizon at all times. Only stars very close to the horizon will ever rise or set, and lines of longitude will always remain approximately vertical, so you can't see this phenomenon there.

Conversely, at the equator the celestial poles will be at the horizon, and the celestial equator will pass directly overhead. Lines of longitude will be parallel to the horizon where they cross the equator, except directly overhead at the zenith where "horizontal" and "vertical" become meaningless. (In technical terms, the observer-relative spherical coordinate system has a singularity there.) So anything in the sky near the celestial equator will appear to rise straight up from the east, without rotating relative to the horizon, until it crosses the zenith and starts descending to the west, now upside down.

This is perhaps most notable visible with the crescent Moon which, as seen from near the equator, will appear to rise with the "points" of the crescent pointing straight up (or down) and to set with the points straight down (or up).

**) The Milky Way actually crosses the equator at about a 63° angle, not 90°, but eh... it's close enough, and the exact angle really doesn't matter much here. It will still (appear to) rotate along with the celestial coordinate grid near it.

Also, in the video in your question, the camera does not seem to point exactly at the equator, but rather appears to be pointed at the galactic center, located at about 29° south of the celestial equator. Qualitatively, though, that also makes fairly little difference. FWIW, the actual celestial equator seem to run close to the top of the picture.

The creator of the timelapse intentionally made it so the camera would track the Milky Way's motion (due to Earth's rotation) and keep centered it in the middle. It's just a filming technique.

If it was a regular timelapse that didn't track anything, then the Milky Way and stars would appear to move in their normal paths due to Earth's rotation until they're either out of view or set beneath the horizon.

The way the mount works it also keeps the rotation of the image constant with respect to the stars, so that in addition to the horizon moving upwards, it also appears to tilt.

From the video's notes:

A timelapse of the Milky Way that was recorded using an equatorial tracking mount over a period of around 3 hours to show Earth's rotation relative to the Milky Way.

Imagine that you stand with your index finger pointing upwards, and someone points a video camera at you, with your smiling face behind your upward pointing finger, and the windows and doors of the room behind you.

Once your finger reaches the leftward direction, the person operating the video camera hits the stop button.

But now someone else processes the video by rotating each frame so that from the perspective of a person watching the video, your finger seems to continue pointing in the upward direction.

Question: What would happen to your smiling face and the doors and windows in the background of the video?

Answer: Your face and the doors and windows would all slowly rotate in unison through $90^\circ$. At the end of the video, you and the room would all appear to be lying on your sides.

Not the answer you're looking for? Browse other questions tagged milky-way rotation .

12
How does the Moon look like from different latitudes of the Earth?
2
Am I looking at the moon upside down here in the US?
0
Did astronomers ever use photographic plate rotation along with alt-az mounts?
2
What are the technological advancements that made it possible for modern large telescopes to work with alt-az mounts instead of equatorial mounts?