Calculating distance to High Redshift Galaxies based on observations

I am aware that we need to account for the expansion of the universe, changing $H$, the relativistic redshift eqn: $1+z=\sqrt{\frac{c+v}{c-v}}$ and so on, but can we accurately calculate velocity using just redshift from observations of very high redshift galaxies? I'm thinking redshifts of $z>7$. I'd expect the light from these distant objects to be extremely redshifted, faint, and small, near point sources. What kind of assumptions/methods do astronomers use to calculate light-travel distance of these difficult to resolve objects? For instance, how would we know that an object being observed is a QSO at $z=7.64$ versus a Galaxy at $z=7.66$?

The "velocity" of something at high redshift isn't particularly meaningful and is not generally used, since cosmological redshift should not really be thought of as a velocity-related Doppler shift. Indeed this velocity exceeds the speed of light above redshifts above 1.5. 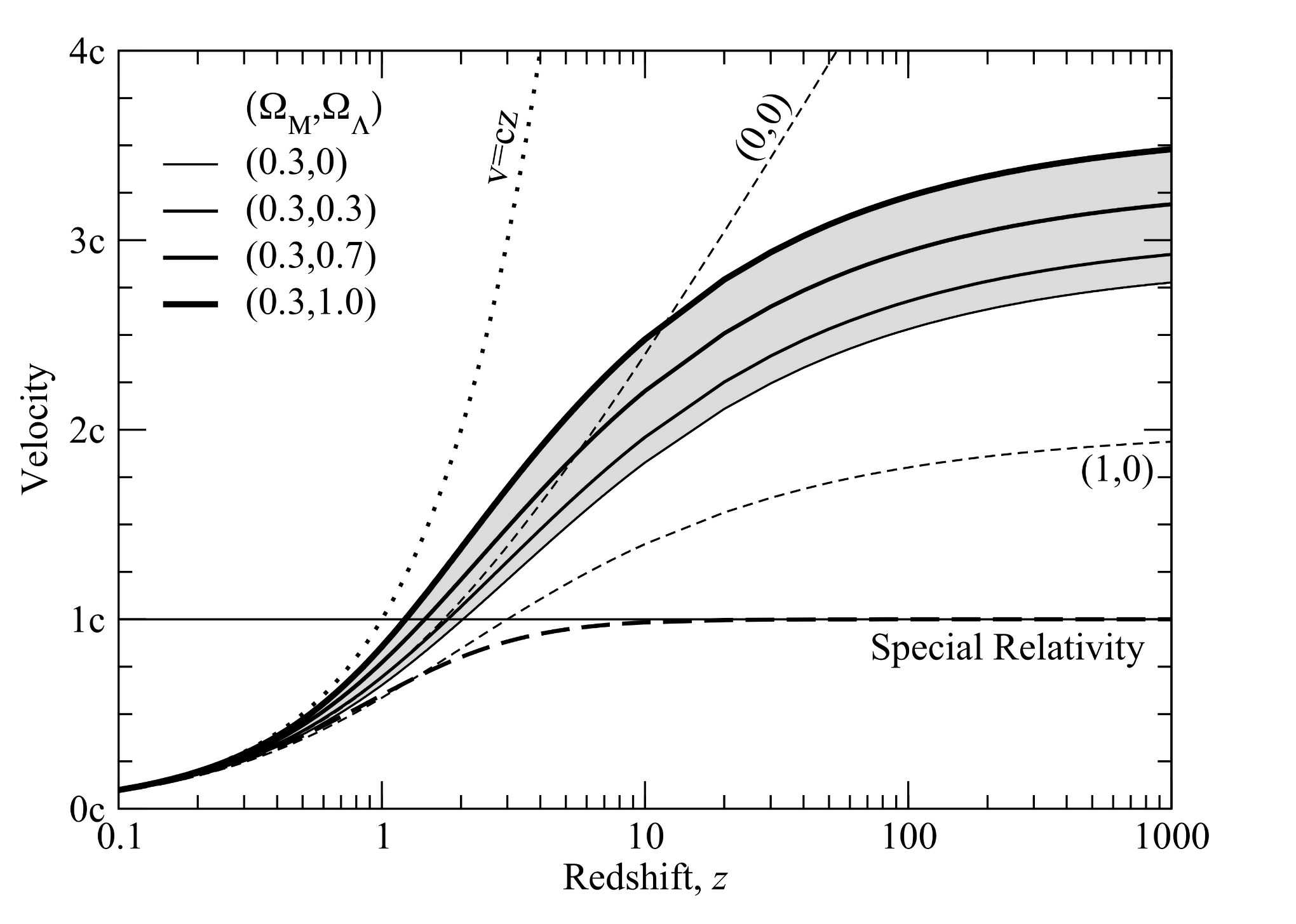 To answer your final question, if the redshift is measured to be 7, then that tells you it isn't a nearby object. Cosmological redshifts of this size are far bigger than any Doppler shift due to actual motion with respect to the Hubble-flow (typically 100-1000 km/s). Thus a redshift of this size would always be dominated by cosmological expansion and we conclude the object is very distant.

Answer to edited final part. QSOs have a different spectrum to a bog-standard galaxy (and are much more luminous). You need a spectrum to get a redshift (certainly one to 3 significant figures). The spectrum tells you it is a QSO. The distance is estimated from the redshift and an assumption about the values of cosmological parameters.

1
How to calculate radial velocity from redshift?

2
Redshift, velocity, distance
4
Calculating distance of comet C/2019 Y4 (ATLAS)
0
Determine distance of asteroid based on two observations from different locations
3
Were radio spectroscopic observations ever used to first measure a distance successfully?
3
Calculating the present comoving distance or light travel distance of distant objects when only one value is given?
1
Is luminosity distance related to both heliocentric redshift and CMB restframe redshift？
1
Distance of distant galaxies
2
Redshift distance proportionality at high Z and need for "mighty mouse" galaxies?