Which JWST instrument modes are compatible with observations of the bright trans-Earth planets Mars, Jupiter, and Saturn? Which aren't?

...answers to the Space SE question Can James Webb take pictures of our solar system? In what ways will they differ from/compliment those from Hubble? suggest that at some point JWST might indeed bother to look directly at Jupiter and Saturn, though it's not scheduled to do so in the first cycle as there are observations more fundamental to its raison d'etre to do first.

"The very large infrared brightnesses of Mars, Jupiter, and Saturn may limit Webb observations of these planets to a subset of the instrument modes"

which is possibly quoted from NASA's JWST Technical FAQ On A Variety Of Mission Issues, Aspects And Capabilities..

Question: Which JWST instrument modes are compatible with observations of the bright trans-Earth planets Mars, Jupiter, and Saturn? Which aren't?

In those PDFs, they describe exactly what instruments they want to point where, but to summarize as far as I can tell they're planning to try to use pretty much all of the available instruments to image Jupiter and Saturn. The above mission only plans to use NIRSpec and NIRCam on Mars, but it's unclear if that's for technical reasons or if that's just all that's required for the data they want.

All modes can be used. But for bright targets, observations are limited to specific filters, subarrays, regions of the target planet, or spectral intervals.

James Norwood and colleagues wrote a paper on this topic, although the full answer is complicated because of the "subset of the instrument modes" part. The simplest answer to understand is for the imager, NIRCam: 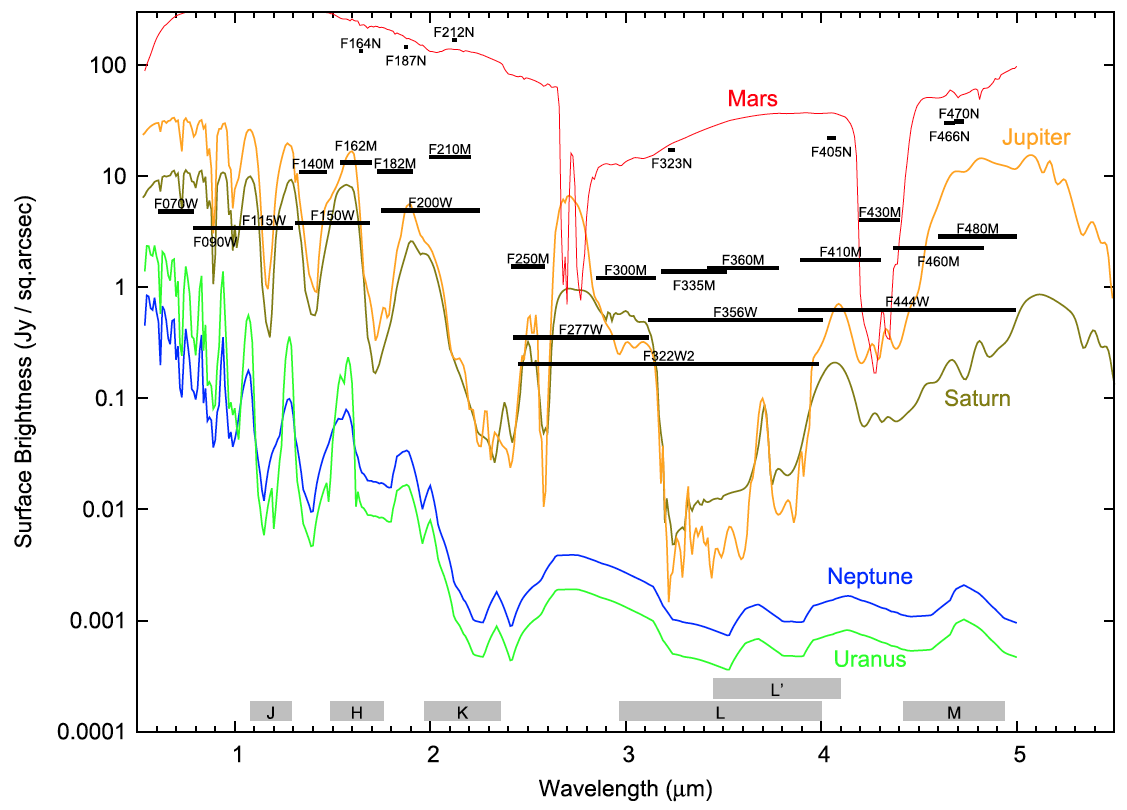 In this plot, brightness of the planets as a function of wavelength is shown as colored curves, while little black lines show the filter bandpasses and saturation limits. So, any colored segments above the black lines mean that particular target would be saturated. This gives a rough idea of which filters can be used in the imager at these planets, but these values can vary depending on parameters like what part of the planet is imaged, whether a smaller or larger subarray is used (affecting minimum readout time), and even things like scattered light from Saturn's rings (which can be much brighter than the atmosphere at some of these wavelengths). Also, the sensitivity estimates for NIRCam were revised after the Norwood++2016 paper, and further revisions will come from in-flight testing.

The Norwood++2016 paper contains similar figures for some of the spectroscopic modes, where additional complications arise. A spectrum could be saturated at some wavelengths, but not at others, so would that observation be considered successful, partially successful, or unsuccessful?

Space Telescope Science Institute also put together a collection of nice 2-page JWST science flyers---a lot catchier than the Norwood++2016 paper---that cover what can/will be done by JWST for the targets mentioned in the original question:

The Mars flyer shows some pretty neat tricks. Target is too bright? Observe its night side!

2
What is the maximum magnitude that the JWST can safely observe?
2
Can JWST be damaged by looking at a bright star?

15
What percent of planets are in the position that they could be viewed edge-on from Earth? (and thus able to undergo transits)
1
what magnification is required to see jupiter, saturn, venus and mars with a 50mm refractor scope with f/12 ratio and 600mm focal lenth