Probability of transit of an exoplanet in front of its star

I'm trying to calculate the probability of transit of an exoplanet in orbit around a star of diameter $d$, at a distance of $4d$ from its centre. Here's what I did: 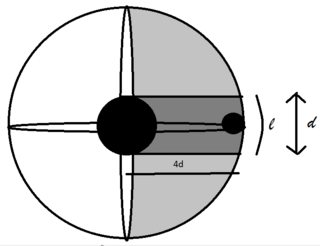 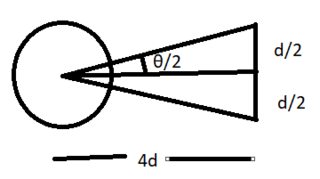 In this figure, we are only concerned about the right hemisphere. The idea I have used is that for a transit to be visible for an observer situated directly to the right, the orbit must extend to within $l$ of the right extreme of this sphere.

Where have I gone wrong, because the answer to this problem is supposed to be $\large\frac{1}{8\pi}$?

Only when the orbital revolution axis (along r in the below image) was some angle $\theta$ from our line of site (along h), would the planetary orbit cross the star from our perspective. The revolution axes where no transit exists could be projected onto a unit sphere as a spherical cap, with area $A = 2\pi (1-\cos{\theta})$. The area of a unit hemisphere is $A_h=2\pi$, so the fractional area of no transits (which is the probability of no transits) is simply $P(\sim t)=A/A_h=1-\cos{\theta}$. Image credit wikipedia 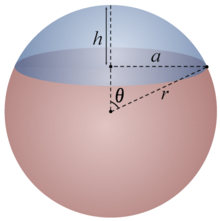 This is an amusing (and tough) math quiz.

We are confronted with 3 numerical results and various mathematical reasonings (of which one is not given):

Given an Observer(O) at a far distance from a Star (S) of radius R, having a much smaller Exoplanet orbiting at distance $a$, the probability that the Observer can detect the Exoplanet by the transit method is denoted Pt. Note that the duration of transit, the luminosity of the Star, the observation time and the sensitivity of the detector are not considered. It is purely a geometrical exercise.

For example, when the orbital plane contains the line between the Observer and the Star (O-S), the transit time is maximum. We can call these orbits « maximum transit orbits » (for that Observer position). When the orbital plane is such that the exoplanet just touches the disk of the Star, viewed from the Observer, the transit time is minimal (near zero). We call these « minimum transit orbits ». Both types of orbits count equally as detectable in the calculation of Pt. When O-S coincides with the axis of rotation, the Observer will never see a transit.

The reasoning in (3) computes (1-Pt) as the ratio of the areas of two spherical caps: the "non-transit cap" and the hemisphere cap facing the observer, both on a unit sphere.

The reasoning in (1) computes Pt as the ratio of arc lengths: the arc of maximum transit and the half circumference, both of a circle of radius a (=4d).

The reasoning in (4) computes Pt as the probability Prob{abs(cos(i)) < $R/a$}, $i$ being the angle that the orbital plane makes with the perpendicular to O-S (see Fig).

Walking through the reasoning in (3)

Take a perfect sphere and make the following « experiment » (I owe this intuitive and nice reasoning to @ConnorGacia):

The connection to our Pt is as follows :

Call the angle between the line O-S and the axis of orbit rotation, $\delta$. Call $\theta$ that value of $\delta$ resulting in minimum transit orbits (in the direction of the given Observer). If we increase $\delta$ from 0° (the orbit is orthogonal to the O-S), then the orbit becomes a transiting one (from the Observer’s point of view), when and only when $\delta$ crosses $\theta$.

For a given orbit, consider a (any) sphere centered at the star and draw on it the two blue caps, each cap is centered on the orbit axis of rotation. Choosing a random direction for O-S is akin to rolling that sphere on a bumpy surface. The Observer can detect the planet if the O-S does not intersect any of the 2 blue caps.

In (1), it is reasoned that, when we increase the inclination angle (called $\theta/2$ in the figure), from 0° (maximum transit), the orbit leaves the transit zone when $sin(inclination)=R/a$.

In (4), it is reasoned that when we reduce the angle $i$ (see Fig) from 90° (maximum transit), the orbit leaves the transit zone when $i$ reaches the value that satisfies $cos i =R/a$.

I will resort again to the intuitive (and nice) « experiment » with the rolling sphere above (again, I am indebted to @ConnorGarcia for this). This time we do not paint the sphere. Instead, once an orbit is chosen, we identify the Equator and the Poles and we draw the « latitude» markers, from Equator to Poles. We roll the ball again on our bumpy surface and when it comes to rest, we note the latitude of the resting point. This latitude is the inclination angle of the orbit with respect to the (random) observation line O-S, which is the outcome of our experiment run. If we repeat several runs of this, we can observe that we get more inclination below 45° than inclination above 45°. Another test is to count how many times we get a rest at, or close to any Pole, and how many time we get, at or close to the Equator. We can observe that we get more often closer to the Equator than to the Pole. This shows that the random inclination angle is not uniformly distributed.

The reasoning in (1) however is based on this false evidence and therefore its result is incorrect.

If you like this answer, please upvote @Connor Garcia too.

Not the answer you're looking for? Browse other questions tagged exoplanet mathematics planetary-transits planetary-science .

18
Why are asteroids with zero orbital inclination rare?

3
What's the influence of a tilted orbital plane, when observing an exoplanet transit?
7
Can the period of the planet transit across the sun be calculated in the same way the eclipse year is?
2
How to recognize exoplanet transit
0
Calculate mass of exoplanet from transit method
6
How do scientists differentiate between a total and a partial transit of a planet passing in front of its star?
1
What is the most grazing exoplanet transit that has been reported with high confidence?
6
After only one eclipse of its X-ray bright primary, how can astronomers estimate the first extragalactic exoplanet's period to be about 70 years?
3
Accurate formula for calculating the mass of an exoplanet using the transit method